Jeannie Gaffigan: My loved ones told me ‘real’ Catholics vote for Trump. Here’s my response. 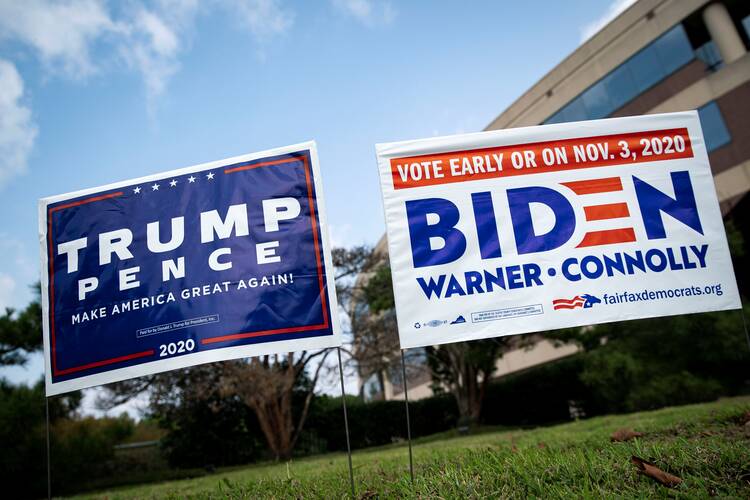 On the closing night of the Republican National Convention, my husband, the comedian Jim Gaffigan, shocked Twitter with a highly uncharacteristic, profanity-laden rant against President Trump.

His online outburst shocked me as much as it did so many others. Of course I knew how he felt about the president—in private. But in Jim’s public persona as an entertainer, he has mostly steered clear of politics and focused on other divisive issues like mayonnaise, napping and horses. His 20-year career of clean and apolitical comedy unraveled with one tweet. When I saw the tweet, I was so confused and embarrassed that I didn’t even realize who or what he was reacting to.

The next day when I opened my Twitter feed, it had suddenly become the battlefield of a modern-day culture war, complete with compliments, fiery insults, plenty of bots and—my personal favorite—speculation that I was the lefty Jezebel behind my husband’s anti-Trump tirade. My critics seemed to conclude: If you don’t support Mr. Trump, you, Jeannie Gaffigan, mother of five, are a pro-abortion, “fake Catholic.”

Ironically, what set off Jim’s “Irish temper,” as my mother calls it, was that speakers at the R.N.C. repeatedly called Joe Biden’s faith into question and accused him of being something that sounded very much like a “fake Catholic.” And now the finger-pointing is directed at the Gaffigans.

My critics seemed to conclude: If you don’t support Mr. Trump, you, Jeannie Gaffigan, mother of five, are a pro-abortion, “fake Catholic.”

Here is my confession: I am a real Catholic, and I am not going to vote for Donald J. Trump.

I was not even watching the convention when Jim went on his Twitter tirade. Like many mothers of big families, the pandemic quarantine has not allotted me much time to kick my feet up and watch TV. By day, I run from room to room, vacuuming endless snack crumbs and unsuccessfully trying to connect multiple children to Zoom classes while losing track of my full cup of coffee I had made hours earlier. By night, I am begging my kids not to brush their teeth with ice cream, while sorting through mountains of laundry, perplexed at how so many matching socks are missing when no one has left the house in six months. I had no desire to watch the convention. Political news coverage these days makes it seem like there are two completely separate Americas, and neither one seems real. TV news just riles me up, and I have plenty of other sources of rile.

But at this point I was in deep. We all know the primary purpose of Twitter is to feed one’s ego, so now defend my Catholicism I must.

Here is my confession: I am a real Catholic, and I am not going to vote for Donald J. Trump.

My faith, family and Catholic education have given me the belief in the innate dignity and worth of every single human being. Human life is sacred, and all humans have equal value. Of course, this means it is wrong to intentionally take a human life under any circumstances, but it is also wrong to disregard human life through racism, unjust social and economic structures, providing inadequate access to health care, wantonly harming the environment, abusing or neglecting anyone—a child, a mother, a father, a grandparent, an immigrant. I am not sure how one thing that harms a life can be weighted more strongly than another, but based on the reaction to Jim’s now-infamous tweetstorm, it is abundantly clear that there is a segment of the Catholic Church that feels that the single issue of abortion, for lack of a better word, trumps every other evil. Somehow a vote against Mr. Trump has become synonymous with not only being a “bad Catholic” but ultimately, being complicit in murder. And even worse, the murder of “society’s most vulnerable.”

[Related: I helped write the bishops’ first document on Catholics and voting. Here’s why I’m voting Biden, not Trump.]

The strangers who attacked me on Twitter using words and phrases like “baby killer” and “infanticide” and who even sent me ghastly photos of aborted fetuses did not have the effect they probably intended. Anyone who knows me or knows of me knows where I stand on life. I would, however, offer a gentle suggestion that anyone showing graphic photographs that depict dead bodies cease and desist immediately. Aside from it being utterly disrespectful of human life, some of us have lost babies prematurely at birth, and these images can be a form of spiritual terrorism. I do not negotiate with terrorists.

These misguided extremists are not the ones who made me stop and examine my own beliefs. What challenged me the most as a Catholic were the people that I love and respect who reached out to me privately and suggested that our Catholic faith dictates that, above all, we must vote for the “pro-life” candidate, that I need to “hold my nose and vote for Trump.” They don’t like him. They hate everything else that he stands for, but we just have to vote for him. Maybe their priest, bishop or beehive convinced them Mr. Trump is the “most pro-life president in history,” and they believed it.

I am not writing this to prove them wrong; I assume if you are reading this you have eyes, ears, brains and Google. But in my observation, Mr. Trump is only pro-Mr. Trump. Still, the hardline message from so many whom I love dearly was clear: Real Catholics vote Trump.

The hardline message from so many whom I love dearly was clear: Real Catholics vote Trump. How am I supposed to handle that?

How am I supposed to handle that? I went to a Jesuit school, where my education was “guided by a spirituality that seeks justice.” This seemed like a perfect opportunity to dig into my Ignatian roots and examine my conscience.

So I turned to prayer and Scripture, which have gotten me through the roughest days of my life. In meditating on the Chaplet of Divine Mercy and the rosary, I found myself guided to the words and actions of Jesus himself. His commandment of loving our neighbor as ourselves is paramount. But as much as “gentle Jesus” guides us through parables, he consistently challenged powerful leaders. He reserves his harshest words (“hypocrites,” “brood of vipers,” “you fools”) not for known sinners or disbelievers but for self-righteous religious elites at the center of power whose religion had become an idol and whose message was toxic and oppressive.

Has the abortion issue become an idol for some Catholics at the expense of everything else? Of course, Scripture can be misinterpreted—the devil himself quotes from it. I needed to work with a guide to help me discern. Jesus gave the keys of the kingdom to St. Peter, and as Catholics we believe that the keys have been passed down through the popes. I decided to look to Pope Francis.

The pope has had his own strong words for American Catholics in recent months. Following the killing of George Floyd, Francis said in a message to the people of the United States, “We cannot tolerate or turn a blind eye to racism and exclusion in any form and yet claim to defend the sacredness of every human life.” The dignity of the human person extends to all of us created in his image, both in the womb and out of the womb. As a Catholic I desire to support a society that strives to protect every life. Systemic racism in our culture has led to such economic and social inequality that it is virtually impossible to have a “culture of life” without addressing the fact that we have been complicit in a long history of devaluing our fellow human beings based on the color of their skin or the way they came to this country.

Can we really sit in our homes with our private health insurance and judge our neighbors who have nothing? How can we strive to heal the tragedy of abortion without acknowledging the deep wounds and life-threatening crises that drive people to it? How arrogant we are to condemn women of any color living in poverty, faced with the unimaginable and horrific circumstances that would drive them to seek an abortion, without taking a good look at how we have failed them by not offering adequate health care, child care, education and employment opportunities? Do we ever stop to think about how far we are from achieving a “culture of life” in light of the well-documented and video-recorded police brutality against Black Americans? Are refugee children, homeless pregnant women or the prisoners on death row not also “society’s most vulnerable”?

How can we strive to heal the tragedy of abortion without acknowledging the deep wounds and life-threatening crises that drive people to it?

Sure, there are wonderful third-party candidates out there who stand up for life and the whole range of Catholic social justice issues. Small parties have fought and struggled to find a voice within the two major parties but have been callously rejected by both. Some Catholic friends have advised me to simply cast a “protest vote” so I can walk away with a clean heart and conscience. I’ve got news for you: This is going to be a close election. There is only one candidate that has a chance to unseat President Trump.

As much as some of my well-intended fellow Catholics will hate to hear this, it is crystal clear to me that the right thing to do is vote for Joe Biden. I believe it will be impossible to tackle these other issues with a president who is working overtime to sow division and hatred in this county through insults, intimidation, fear and blatant racism. This venomous “us against them” mentality is trickling down, seeping into our churches and poisoning our pulpits. To a culture of life, vipers are deadly.

For the sake of Christ’s sorrowful passion, have mercy on us and on the whole election. 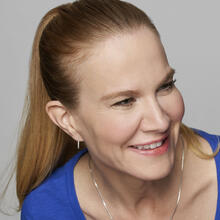 Jeannie Gaffigan is an actress, producer, writer, philanthropist, mother of five and all around comedic force. She is most well-known for the comedy empire she created with her writing, producing partner, and husband, Jim Gaffigan, and is a New York Times Bestseller for her book, When Life gives You Pears.

@jeanniegaffigan
Show Comments ()
Join the conversation: Login or create an account
Before you can comment, you need to update your profile to include your first and last name, as required in our comments policy. Then reload this page and you'll be set up for commenting. Update your profile