The Latino vote is (still) not monolithic. We shouldn’t be surprised. 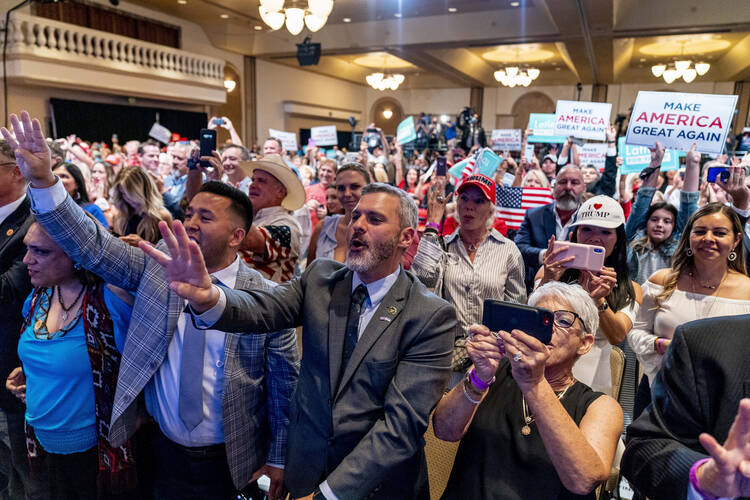 I have read a lot of stories this year about the “Latino vote.” I am always curious about them because, having been born in the Dominican Republic to a Latina mother, I qualify as part of this panethnic group.

But what defines all Latinos? Our love of music? Our love of family? Our baseball players? Well, no, and we do not vote on those things anyway.

One thing that generally identifies the Latinx or Hispanic or Latino/a community (see, we can’t even agree on what to call ourselves) is that we can trace our ancestry to Latin America. But listen (pero oye), in Latin America we have different political parties. We don’t all vote the same way there either.

In Latin America we have different political parties. We don’t all vote the same way there either.

Still, a lot of people are dumbfounded that a large minority of U.S. Latinos apparently voted for Donald Trump this year. How could this happen?

Patricia Romero, a Catholic in Arizona, spoke to Kevin Christopher Robles for a story in America about Trump support in this swing state. She said the Affordable Care Act was devastating for the health and life insurance business that she runs.

And back in March, before the pandemic really hit, I wrote a piece about Latinos who support Mr. Trump. The toughest thing about working on the story was getting a Trump supporter to talk to me—they tend to be highly suspicious of anyone in the media.

I did talk to three people who told me they supported Mr. Trump for a number of reasons. A small business owner, Sylvia Menchaca, told me she supported the president because he was good for the economy. Others alluded to Mr. Trump’s pro-life stance on abortion.

A 2019 study by the Public Religion Research Institute found Latinos were the only major race or ethnicity where a near-majority of respondents (and a majority of those with a religious affliation) believed abortion should be illegal in all or most cases. Still, according to a Latino Decisions poll in February, only 2 percent of Latinos based their vote on limiting abortion.

Not all Latinos make their voting decisions based solely on openness to immigration. Or on abortion.

A lot of people are confused about this year’s results, given Mr. Trump’s rhetoric and policies concerning immigrants. The obvious answer, which may not satisfy those of us who have a heart for immigrants, is that not all Latinos make their voting decisions based solely on openness to immigration. Just as with abortion, we are not one-issue voters.

So are there any takeaways from the results so far?

The Latino vote—if folks insist on grouping us together like this—is complicated. Among immigrants, voting often varies by countries of origin. Those from Cuba and Venezuela have traditionally tended to vote more Republican, those from Mexico and the Dominican Republic more Democratic. But not all Cuban-Americans vote the same and not all Mexican-Americans vote the same.

Please do not assume that Latinos are going to support your party simply because we did in the past. (And if you are a leader in the Catholic Church, please don’t assume we’ll keep coming back simply because we were raised in the faith.) Latinos are independent thinkers, and we don’t simply go along to get along.

I hope this realization will convince more Republicans to get on board and pass comprehensive immigration reform. After all, they do not have to fear the Latino vote. And I hope Democrats will consider opening the party again to those of us who oppose abortion.

So the political parties would do well to listen to Latinos when they are developing their platforms. Right now, it feels like the dominant culture establishes the political platforms and then expects us to simply follow. That is not working for us.