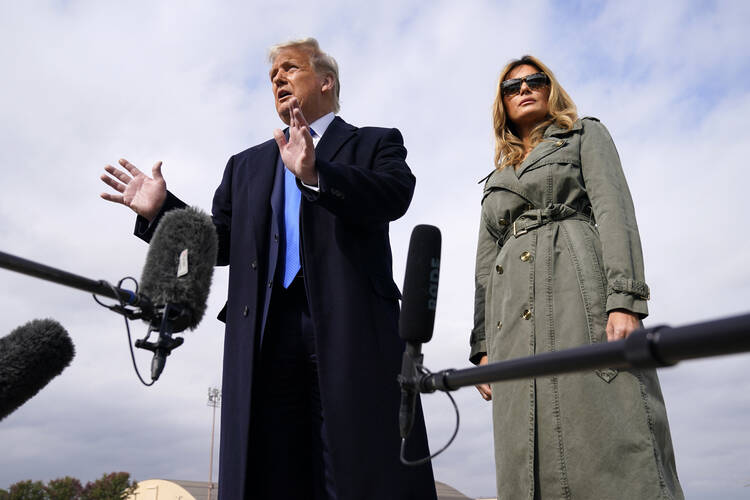 Next week, U.S. voters will decide whether to continue down the path that President Trump has charted over the last four years or turn to former Vice President Joe Biden, who promises to take the country in a more progressive direction. Mr. Biden would be only the second Catholic president in U.S. history, but according to most polls, Catholic voters closely resemble the country at large, with Mr. Trump retaining most of his supporters from the 2016 election. Three Catholic Trump voters recently spoke with America, and their backgrounds and rationales for supporting the president differ considerably.

All attest to being deeply engaged in their faith and in their local communities. All three said that they cannot vote for anyone other than Mr. Trump. And all three live in Arizona, which in 2020 has been classified as a swing state. Here is what they had to say.

‘A Civil Right to Life’

Janet Cook owns both a home remodeling business and a health coaching enterprise, and she said she has been going to daily Mass for 30 years.

“I have a great love for our church, our faith and for Jesus,” she said, adding that she is a member of the Disciples of Jesus and Mary, a lay formation group that focuses on serving the needs of local parishes. Ms. Cook regularly attends retreats and participates in Cursillo, a three-day pilgrimage designed to teach lay Catholics how to become better leaders.

When it comes to discerning who to vote for, Ms. Cook made it clear that she had one priority above all. “The most important right we have is the right to life,” she said. “And so the primary discerning factor for me is whether a candidate supports the civil right protection to life from conception to natural death.”

She told me about her childhood growing up on a farm. While reading the mail one day, she came across a brochure about abortion. “It was a miracle that I got [that brochure],” she said. “I was shocked. I knew as a Catholic that abortion was wrong, but to see actual arms and legs, I was like, ‘Oh my gosh.’ You don’t even have to have any faith to realize that this is a baby.”

“It just became primary to me that we need to restore this right. There are consequences to all this bloodshed.”

“I have a passion for injustice,” she said. “I realized that only people who are already born are going to be for abortion. And someone needs to defend and restore the protection for [unborn] rights.”

“You’re only pregnant temporarily, and it causes so much harm to a woman to go through an abortion procedure. Traumatic, even. To go through that is against nature. It just became primary to me that we need to restore this right. There are consequences to all this bloodshed.”

“As a business owner, you want someone who is going to prioritize you,” she said. She welcomed the Paycheck Protection Program, which was passed by Congress and implemented by the Trump administration to prevent small businesses from folding during the coronavirus pandemic.

Ultimately, however, it is the issue of abortion that concerns Ms. Cook most. No other issue comes close to her priority for “the civil right to life.”

“Satan wants to attack the family,” she said. “And part of that attack is abortion.”

At the age of 30, Patricia Romero married a man from Ohio and moved from Mexico to the United States. The first thing that struck her about U.S. Catholics was their dedication to their faith.

“In Mexico, I was born and raised Catholic,” she said, but she noted that, since most people were Catholic where she grew up, it felt like just another part of the scenery. “In the States, I was impressed...how the people appreciate more being Catholic.”

Growing up in Mexico, Ms. Romero’s lay vocation was prison ministry. She talked about how she visited prisons as a young person to minister to inmates, something she still does from time to time in her adult life. “It was beautiful, those years of my life,” she said.

Today, Ms. Romero owns and runs an independent health and life insurance company. “My dad was a doctor,” she said. “It was a way of living his Catholic faith. If someone didn’t have money to pay, he would give the consultation for free. That’s [the environment] where I was raised.”

Ms. Romero said that the Affordable Care Act, also known as Obamacare, was “devastating” for her business. “Nobody talks about how health insurance agents disappeared,” she said.

Ms. Romero said that the Affordable Care Act, also known as Obamacare, was “devastating” for her business.

Her dissatisfaction with Obamacare led to her support for Mr. Trump. “I was criticized because I’m a minority, I’m Hispanic,” she said, noting that some friends “were enraged against me.”

She said that there are now more Latinos who support Mr. Trump, something suggested by recent polls. “We want to preserve life,” she said. “We are family-oriented. It’s common sense. We need to strive to defend life in this country.”

Ms. Romero also said that she is “very close friends with Abby Johnson,” an anti-abortion activist made famous by her much-publicized exit from a job at Planned Parenthood. Ms. Johnson was a speaker at this year’s Republican National Convention.

Ms. Romero praised Mr. Trump for being the first president to ever attend a March for Life. “If we don’t have life, we have nothing else,” she said. “Everything—immigration, borders, taxes, health care—it all goes to nothing if there is no right to life.”

Born in Salt Lake City, Utah, in 1952, Lynn Ray has found himself on the move a lot. During his childhood, he moved from Utah to Idaho, then finally to Arizona. After graduating from Arizona State University through the R.O.T.C. program, he spent 11 years in active duty in the U.S. Air Force, flying C-130 transport planes in Europe. He spent an additional 11 years in the reserves, during which he settled back down in Phoenix, got married and raised four kids. Now he is a retired veteran.

Mr. Ray told me that both his Catholic faith and his patriotism were foundational to who he is today. At his local parish of St. Theresa, he started a Boy Scouts troop after leaving the Air Force, which he viewed as an extension of his service to his country. “I was very strong with my Catholic faith with the boys,” he said. “I would take them on campouts talking about the Bible and Bible stories. I taught them about Scout laws and Scout oaths, which had to do with God, family and country.”

A number of his own Boy Scouts eventually grew up to become seminarians and theologians, a fact of which he is very proud. “It was like God’s testament to me: ‘Plant the seed and I’ll do the rest,’” he said.

Mr. Ray told me a number of stories about the founding fathers that informed his views about government. “If we allow the government to control us, then we will lose our freedoms,” he said. “In the Constitution, there are unalienable rights to life, liberty and the pursuit of happiness. Government can’t get in the way of that.”

He cited, in particular, the Second Amendment. “I own six guns,” he told me. “The world is a dangerous place. I want to be able to defend myself and my family.”

“The world is a dangerous place. I want to be able to defend myself and my family.”

Mr. Ray has come into conflict with his four children over his support for Mr. Trump. All of them have entered STEM fields including cancer research, pollution reduction, computer science and engineering. “I’m very proud of the achievements of my kids,” he said. “But they hate Donald Trump. They think that he’s crazy, that he’s a misogynist, and he’s evil.

“My youngest son told me: ‘Dad, if I ever have kids, I don’t want you around them because I think you’re a bad influence.’ And that just broke my heart.”

Mr. Ray said this rift intensified when, during his father-in-law’s funeral, his children saw him without a mask. Mr. Ray’s trust in Mr. Trump’s handling of the pandemic, including his strong belief in the efficacy of the anti-malarial drug hydroxychloroquine, also worsened matters. Now, Mr. Ray’s children have essentially cut off contact with him.

“I said, in 10 years, let’s go ahead and talk about this,” Mr. Ray said, hoping that relations between them will improve by then. Still, he remains saddened by the divide caused by his family’s differing political beliefs.

Mr. Ray now spends most of his time with his wife and his church.

“We pray the rosary every morning,” he said. “We do a two-mile walk, and that’s when we do it. My wife, she goes to church every day. I usually try to go two or three times a week with her. I’ve done a lot of work with ministries of our church.”