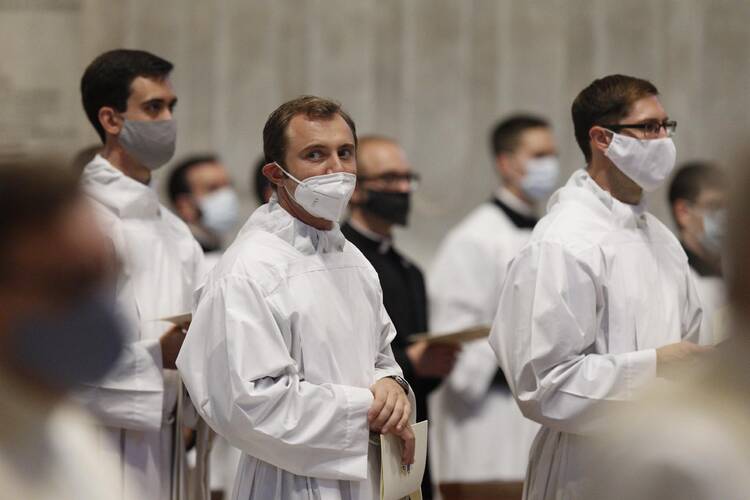 Seminarians at the Pontifical North American College attend the ordination of deacons in St. Peter's Basilica at the Vatican in this Oct. 1, 2020, file photo. Students and faculty at the U.S. seminary in Rome are under quarantine after several students tested positive for COVID-19. (CNS photo/Paul Haring)

“We are isolating the students who tested positive, quarantining ourselves on campus, and increasing our testing,” Father David A. Schunk, vice rector for administration, said in an email to Catholic News Service Oct. 29.

Citing privacy concerns, Father Schunk declined to reveal how many students were infected.

Nevertheless, he said, “I have observed that the community understands the situation and remains upbeat.”

The positive test results came only a few weeks after the students’ courses began at the pontifical universities in Rome.

In early May, the Congregation for Catholic Education published recommendations asking the universities to do what is needed “to be able to teach in the ordinary way, with the lectures held in the presence of students and teachers.”

Some Catholics took glee in Trump’s Covid diagnosis. Do they need to go to confession?
Michael J. O’Loughlin

So-called “distance learning,” it said, “is no alternative” and must only be used “in part and for particular situations,” with authorization from the Vatican office.

Most of the universities are offering a hybrid of in-person and online courses.

Already in late July, Father Schunk told CNS that the seminary was taking steps to ensure social distancing in communal areas and would monitor students’ temperature.

“Like all plans, we are expecting them to change over time as the situation continues to change, but we know we must be flexible in order to do our best to keep the entire community healthy,” he said.