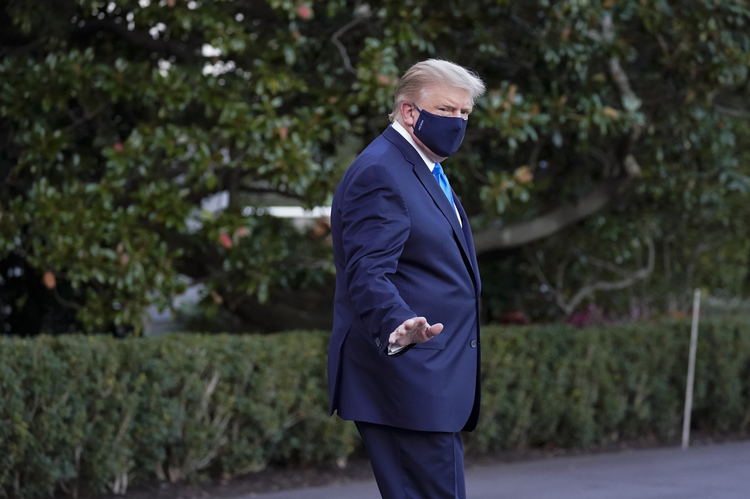 President Donald Trump waves to members of the media as he leaves the White House to go to Walter Reed National Military Medical Center after he tested positive for COVID-19, Friday, Oct. 2, 2020, in Washington. (AP Photo/Alex Brandon)

In the days following President Trump’s announcement that he had tested positive for the coronavirus, the dictionary publisher Merriam-Webster announced that searches increased 35,000 percent for the term schadenfreude, a word borrowed from German that the dictionary defines as “enjoyment obtained from the troubles of others.” Anecdotally, I heard from more than a few people who struggled with uncharitable feelings about the president’s illness, including one Catholic who contacted a priest to ask if he should seek absolution for hoping Mr. Trump’s condition would worsen.

Curious how Christians should respond to experiencing these kinds of feelings, I called timone davis, who teaches pastoral theology at the Institute of Pastoral Studies at Loyola University Chicago, with a special focus on Black Catholic theology. (timone davis does not use capital letters in the spelling of her name.) I asked the professor what she thought about Catholics harboring feelings they know violate the biblical command to love our neighbors, the role of righteous anger in responding to news and advice for handling our emotions during what promises to be a volatile election. The conversation below was edited for length and clarity.

In the days following President Trump’s announcement that he had tested positive for the coronavirus, searches for the term schadenfreude increased 35,000 percent.

Michael J. O’Loughlin: How should Christians deal with experiencing feelings that seem to contradict their faith?

timone davis: First, acknowledge, “Hey, I’m actually a sinner. I actually have these thoughts and ranges of emotion.” And accept it. We too often live under the misconception that being a Christian makes me invulnerable to being human and all that comes with humanity. Christianity seems to say, “As long as I profess that I believe in God, I will never have these feelings.” Well, that’s just ridiculous. We are going to have these feelings. But what does faith teach us? Faith teaches us that we need to acknowledge where we are and then seek to be better.

How did you react when you heard people express these kinds of things about the president?

I didn’t even know he was in the hospital or had gotten sick until somebody was like, “He ought to just die.” And I was like: “What? Wait a minute. That’s not what we’re about. We’re not about trying to wish harm on people. Let’s come back to what we are about.” [The other person said], “Well I’m just really frustrated.” [I said]: “O.K., let’s be there. Let’s be with that frustration. Let’s talk about that before we start wishing harm on another.”

The reality with Trump is an extreme, so let’s take it to everyday life. Somebody wronged us and we’re left hurt by it. We want retribution or revenge. This is not what we’re supposed to seek. But we are supposed to acknowledge that it’s something we’re feeling and that we want something done. And once we get into that space, we can turn it over to God and say, “You know what, not my will but yours.”

Is there a point in a Christian’s life that they will not react to news like this in the first place?

I think it’s what you do with [those emotions] and how long they persist in your life. I always talk about how I’m on a quest to be obedient to God. Early on in that quest, it might have taken me 23 months to be obedient. Now that I’m a little older, with a little more experience of what disobedience looks like, it may take me an hour.

So I think we still have the inclination. It’s how long it takes us to get to the point of [asking], “What is the God response, the God-in-us?” Does it take us months, maybe even years, to get there? Are we down to an hour? Maybe we’re down to 30 seconds? But I don’t think that as a Christian those feelings just disappear.

Is it a problem if we simply feel these feelings, don’t act on them and ultimately just ignore them?

I think so. Any of our feelings, when they sit around, they root themselves, like a weed. They hide underground. The next thing you know, that weed has popped up. And you’re like, “Where did you come from?” And you know it was down there, that you didn’t get rid of it.

This is what I’m feeling. O.K. Why am I feeling this way? What has triggered it? Now what? I need to do something with it.

Does righteous anger play a role in these kinds of feelings? What if you feel especially wronged by someone who, for example, hurts you or maybe mismanages a pandemic?

I think there’s a place for righteous anger. But I don’t know that righteous anger should result in feeling that when something bad happens to another person, that it’s justified, that they should have that happen to them because what they did or what they said was wrong. That calls into question, who gets to determine if something is wrong? That’s the danger.

I think we move into some very dangerous territory by saying: “Well he was carefree and frivolous with our lives and didn’t pay attention to what’s really been happening to people. And so now he’s sick, and that serves him right.” Just think about that for a minute. So whenever we’re wrong, then whatever happens to us is justified? If we don’t want something for ourselves, then why are we wishing it on other people?

Do Christians have an obligation to pray for political leaders, even ones we disagree with?

We have an obligation to pray for everyone to be better, I think, no matter what they’ve done. [That’s] the whole point of turning the other cheek. We’re really supposed to seek people’s goodness because ultimately we are hoping that people will be converted. A transformation of the heart is ultimately what we’re hoping for. I believe we have an obligation to pray for our leaders who may not be acting in the best interest of the common good right now. When they err, we need to pray for them, that they get back on track. But we’re also praying for everyone to do that.

I believe we have an obligation to pray for our leaders who may not be acting in the best interest of the common good right now.

Do we just want the leaders to do the work so we don’t have to? Are we not also being held accountable in some way for our own actions and decisions?

With the election just a few weeks away, do you have any advice about how Christians should manage their emotions during what promises to be a volatile time?

I really want people to ask the question “How does your response help bring about the reign of God?” I’m very much aware a lot of people are going to be polarized. What I’m asking people is: “Who exactly do you serve? And as a Christian, does it matter who the president is for you to live a Christian life?”

This will help you understand why I’m struggling to find the words: In the United States, Black bodies overall are not valued. So in my world, it doesn’t matter who the president is. There are some ways of being in the United States that don’t touch the disregard for Black bodies. So as a Black woman in the United States, if Biden wins or if Trump wins, as it’s set up now, nothing changes. As to how people perceive me or the encounter I have with police, the presidency doesn’t change that. So as a Christian, my call to people is, How is God calling you to live as a person who believes in Jesus the Christ? And how does that living then challenge the systems that are in place? For me, that extends beyond the presidency.

In your own community, how are you making sure that the poor are addressed, that the homeless are addressed? Have you paid attention to these? I have strong emotions around those issues. How are we gonna take those strong emotions that result from an election and refocus them on what is happening as we live as Christians?

We have deeper issues that need to be addressed as Christian people. And the presidential election is just one of them. It’s just one.

[Read next: The difference between Trump’s ‘Don’t be afraid of Covid’ and Jesus’ ‘Be not afraid’]

Show Comments ()
Join the conversation: Login or create an account
Before you can comment, you need to update your profile to include your first and last name, as required in our comments policy. Then reload this page and you'll be set up for commenting. Update your profile
More: Donald Trump / Prayer / Theology

Michael J. O’Loughlin is the national correspondent for America and host of the America Media podcast “Plague: Untold Stories of AIDS and the Catholic Church.”