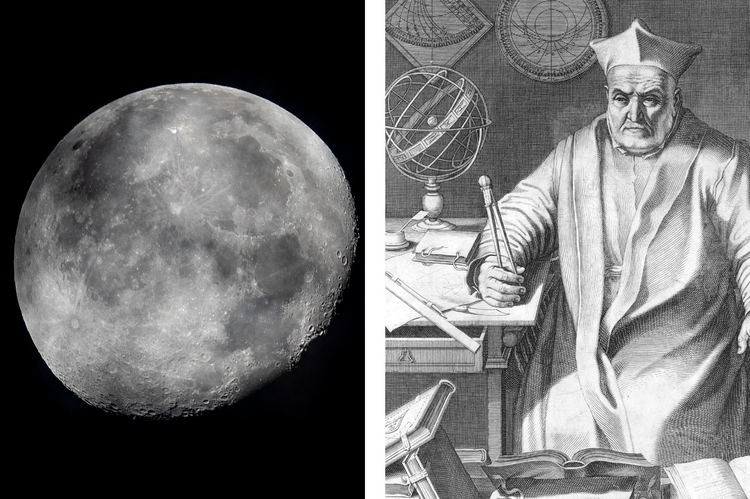 Left: In this early Monday, Oct. 5, 2020, file photo, a waning moon is seen at the sky over Frankfurt, Germany. (AP Photo/Michael Probst, File) Right: A 16th century engraving of Christopher Clavius after a painting by Francisco Villamena. (Wikicommons)

On Oct. 26, NASA’s Stratospheric Observatory for Infrared Astronomy, or SOFIA, announced the discovery of water on the moon. The water was discovered on the moon’s sunlit surface, which “indicates that water may be distributed across the lunar surface, and not limited to cold, shadowed places,” according to a press release.

NASA’s astrophysics director Paul Hertz said it is too soon to know whether this water—found in and around the southern hemisphere’s sunlit Clavius Crater—would be accessible. The surface could be harder there, ruining wheels and drills.

Still, the discovery is significant: Water resources can support future missions to the moon and, eventually, would be necessary for sustaining life. SOFIA plans to continue looking for additional locations of water on the moon and to study how the water is “produced, stored, and moved across the Moon.” Eventually, water resource maps of the moon will guide future space exploration.

The water was found in the Clavius Crater. Who was Christopher Clavius, S.J.?

The Clavius Crater on the moon’s southern hemisphere is visible from Earth because of its immense size. The crater is named after Christopher Clavius, S.J., a German Jesuit, astronomer and mathematician. Clavius was born in 1537, and he entered the Society of Jesus at the early age of 16. After studying in Portugal and Rome, he was ordained a priest in 1564.

The water was found in the Clavius Crater. So who was Christopher Clavius, S.J., and why is there a crater on the moon named after him?

His observance in 1560 of a total solar eclipse as a student inspired his life’s work: astronomy. Clavius is known for his work on refining and modifying the modern Gregorian calendar, and as Billy Critchley-Menor, S.J., wrote in America, Clavius was even called the “Euclid of the 16th century” before his death in 1612. He was one of the first mathematicians in the West to popularize the use of the decimal point, and his contributions to astronomy influenced Galileo, even though Clavius himself assented to a geocentric solar system, believing the heavens rotated around the Earth.

Nevertheless, he was one of several Jesuits who significantly influenced Galileo’s discoveries; Paschal Scotti wrote in his 2017 book Galileo Revisited that “up until 1616 the Jesuits had been the greatest support to Galileo, and time and again he turned to them as the beacons of scientific excellence and integrity in all his difficulties.”

Jesuits are still looking to the stars

Clavius was an intellectual ancestor to many contemporary Jesuits who have built upon his work and the work of countless astronomers since. Many of these members of the Society of Jesus have been instrumental in the work of the Vatican Observatory, one of the oldest astronomical research institutions in the world.

Jose Funes, S.J., an astronomer and former director of the Vatican Observatory, co-authored a study in 2017 on the likelihood of contact between civilizations on different planets.

David Brown, S.J., a Vatican astronomer specializing in stellar evolution, was interviewed by America in 2018. He suggested that scientific inquiry and cosmological discoveries align seamlessly with the educational mission of the Society of Jesus. Describing his work with the Vatican Observatory, he said: “The Observatory is one example in a long church tradition. It’s the pursuit of the truth of God that changes us, but more than just knowing things, it’s about allowing the truth of God to transform us. To know what it means to be a just person, a moral person, has tremendous implications for our approach to justice, economics, the environment.”

Guy Consolmagno, S.J., a Jesuit brother and the current director of the Vatican Observatory profiled by America in 2017, likewise sees no conflict between his faith in God and his scientific work: “It always makes my faith stronger because it makes my relationship with the Creator much richer. When I go to pray, the God I encounter in prayer I compare with the God I encounter in creation. And see it is the same God.”

What would a chapel on the moon look like? Catholics in the ’60s had some ideas.
James T. Keane

Of the 15 current staff members of the Vatican Observatory, 13, including Brother Consolmagno and Father Brown, are Jesuits. Based at the papal summer residence at Castel Gandolfo, the observatory also has a research center located in Tucson, Ariz.

Pope Leo XIII articulated the observatory’s mission in 1891, when he said that its astronomers work “so that everyone might see clearly that the Church and her Pastors are not opposed to true and solid science, whether human or divine, but that they embrace it, encourage it, and promote it with the fullest possible devotion.”

Pope Francis’ remarks at the observatory’s 2017 international conference echoed Pope Leo XIII’s vision: “I encourage you to persevere in your search for truth. For we ought never to fear truth, nor become trapped in our own preconceived ideas, but welcome new scientific discoveries with an attitude of humility.”

Jesuit scientists even have a prominent place in literature. Mary Doria Russel’s novel The Sparrow recounts a Jesuit mission to space that makes first contact with an alien race.

[Read this next: Why are so many craters on the moon named after Jesuits?]