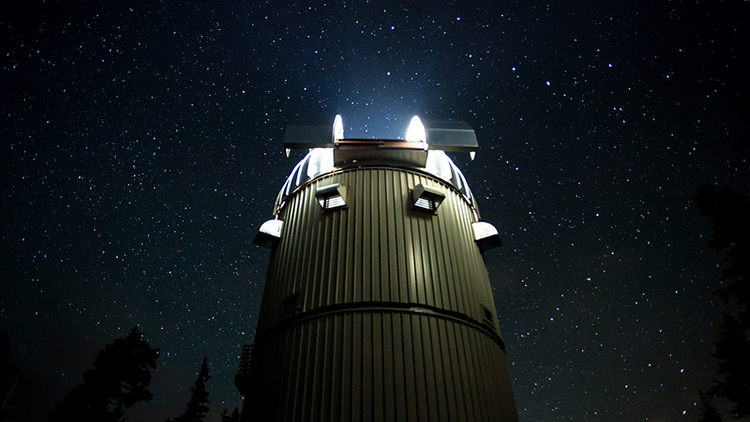 A long exposure at the Vatican Advanced Technology Telescope in southeastern Arizona in 2014.  Photo courtesy of the Vatican Observatory

In a forgotten corner of the pope’s sprawling summer estate at Castel Gandolfo in the hills outside Rome, an unusual group of astronomers and cosmologists looks to the heavens for divine inspiration.

Twelve Catholic priests and brothers live, work and pray at the Vatican Observatory as they explore some of the universe’s biggest scientific questions, from the Big Bang theory to the structure of meteorites and stars.

“The observatory exists to show the world that the Catholic Church supports science,” says Brother Guy Consolmagno, an astronomer from Detroit who is also the observatory’s director.

“We have two jobs—to do science and show the world. My job is to make sure the other scientists have the space and resources to do the work.”

The observatory, or “specola” as it is known in Italian, lies hidden inside 135 acres of lush gardens that are filled with gnarled oak trees and manicured flowerbeds.

We have two jobs—to do science and show the world.

These days tourists can tour the palace where, up until Pope Francis, the popes have traditionally spent their summer vacations. The vast gardens are also open to the public, and a tiny train takes visitors along shadowy paths past the ruins of another spectacular palace, where the Roman Emperor Domitian holidayed in great style in the first century A.D.

But few realize there is a hive of scientific research underway at Castel Gandolfo that has more to do with the future than the past. The observatory recently hosted an international conference to discuss black holes, gravitational waves and other scientific questions.

“I encourage you to persevere in your search for truth,” the pope told the top-level researchers. “For we ought never to fear truth, nor become trapped in our own preconceived ideas, but welcome new scientific discoveries with an attitude of humility.”

Consolmagno, who is a Jesuit like the pope, specializes in meteorites and asteroids and loves showing off specimens among the 1,000 in the observatory’s collection as well as a piece of the moon rock collected during the Apollo 17 mission in 1972.

“People have been good at what meteorites are made of, but no one had done a survey of their physical properties,” he says. “We took it upon ourselves to be those people. It’s taken us 20 years.”

Consolmagno, who was awarded the prestigious Carl Sagan Medal for his research, co-wrote a book called “Would You Baptize an Extraterrestrial?” with fellow Jesuit the Rev. Paul Mueller, to show how faith and science can co-exist.

Consolmagno says science is critical in shaping our culture and he wants more people to understand how it works. He also says his research deepens his personal connection to God.

Consolmagno says science is critical in shaping our culture and he wants more people to understand how it works.

“If you believe that God created the universe, then knowing how the universe works, gets you closer to the Creator,” says Consolmagno.

A new observatory was built in the gardens in 1939 and massive telescopes were installed to enable astronomers to observe the stars and planets.

The telescopes are no longer used today due to the expansion of Rome’s city limits and the effect of urban “light pollution,” as city lights interfere with the researchers’ stargazing.

“In the 1980s it became impossible to use the telescope because the light pollution meant we were seeing fewer and fewer stars and more lights,” Consolmagno says.

These days the astronomers and cosmologists use a second Vatican observatory in Arizona for their stargazing and they are restoring the telescopes at Castel Gandolfo with the aim of inviting science enthusiasts on private tours of the building.

The Rev. Gabriele Gionti, a 49-year-old cosmologist, has been at the observatory since 2010. A Jesuit priest from southern Italy, he is looking into the moment when the Big Bang is believed to have occurred and the universe was created 13.8 billion years ago.

In Space as on Earth: God, science and 'Star Trek'
Terrance Klein

Like Consolmagno, Gionti does not see science and religion as mutually exclusive and says faith aids his scientific exploration. And he insists scientific research into how the universe began is not in conflict with Christian faith.

“We can’t take the Bible as a scientific book” because it was written by people so many centuries ago, he says. “We have to extract the message God has given. Creation is an act of God, an act of life.”