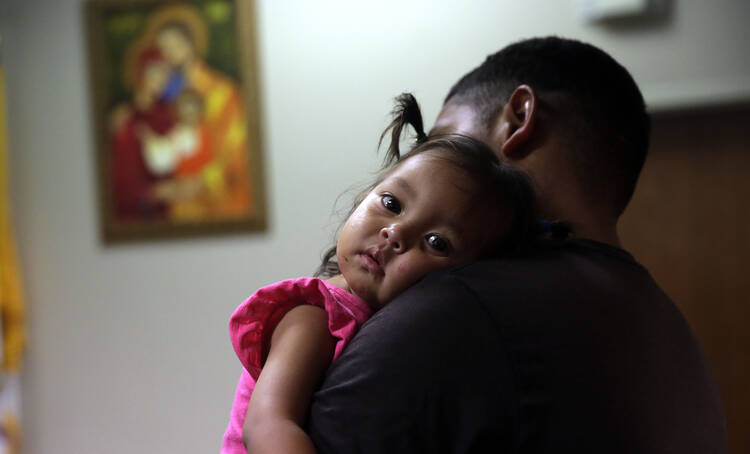 Hundreds of children remain separated from their parents despite a court order that they be reunited by July 26. The Trump administration reunited more than 1,800 children separated at the U.S.-Mexico border with parents and sponsors, according to the Associated Press.

Archbishop Gustavo García-Siller of San Antonio, Tex., said he was “extremely disappointed—but unfortunately not surprised.” Catholic Charities in San Antonio was one of four entities asked to collaborate with the reunification effort led by the federal government, he said in an email to America.

“We still stand ready to serve these immigrants and their families, because as this deadline passes, the crisis continues,” Archbishop García-Siller said. “We, and the larger San Antonio community, have done our part, but sadly—in some ways tragically—our expertise has been underutilized by federal authorities.”

“We still stand ready to serve these immigrants and their families, because as this deadline passes, the crisis continues.”

Catholic Charities assisted many families thanks to employees working “countless hours,” strong community support and donations, the archbishop said. That led to children seeing their parents for the first time in weeks if not months. Yet the number of families they helped was a fraction of the 400 they were told to expect, Archbishop García-Siller said.

In May, Attorney General Jeff Sessions vowed to prosecute everyone who enters the United States illegally under the zero-tolerance policy. He said children who enter illegally will be separated from the adult who accompanies them, whether the adult is a parent or a smuggler.

“The administration has a moral obligation to make all of these families whole,” Kevin Appleby, the senior director for international migration policy at the Center for Migration Studies of New York, told America.

“The administration has a moral obligation to make all of these families whole.”

Mr. Appleby called it “astonishing” that the federal government would deport parents whose children are currently in U.S. custody. There is also evidence that some parents were coerced into signing waivers for deportation, he said.

“It’s disturbing that they were unable to keep track of what parents belong to what children,” Mr. Appleby said. “They’ve created this mess, and they need to clean it up.”

The administration has said some parents are “ineligible” to be reunified with their children, a statement Mr. Appleby said needs to be explained.

While there have been efforts to reunify families and end the practice of separation, the zero-tolerance enforcement policy remains in place.

“There’s no reason the administration needs to continue it,” Mr. Appleby said. “We should be using our resources for those who intend to cause us harm. Not on families. With a flick of his pen, the president could change zero tolerance.”

Bishop Joe S. Vazquez: “Children are not instruments of deterrence but a blessing from God.”

In an interview last month with America, Bishop Daniel Flores of Brownsville, Tex., said such enforcement reveals “a certain lack of tenderness in our heart.”

“This whole reality has frazzled the community,” he said. “They just don’t understand it. The administration is using kids to get their [deterrence] message out.”

“Children are not instruments of deterrence but a blessing from God,” he said in a June 1 statement. “Family unity is a cornerstone of our American immigration system and a foundational element of Catholic teaching.”

“To threaten families who are fleeing harm and legally seeking protection at our borders with family separation in order to deter their migration is cruel and unjust,” according to the letter sent to then-Homeland Security John Kelly, who is now the president’s chief of staff. “Those same families who feel they have no other choice but to flee may now try any alternative available to the perceived risk of family separation, meaning they may well be driven only further into the hands of unscrupulous smugglers and traffickers.”

The zero-tolerance policy follows efforts by the Trump administration to curb both legal and illegal immigration. Last September, Mr. Sessions announced the termination of the Deferred Action for Childhood Arrivals program, a policy that protected undocumented immigrants who came to the United States as children from deportation.

In April, Homeland Security Secretary Kirstjen Nielsen announced the administration would crack down on so-called loopholes available to those who seek asylum in the United States. Homeland Security has also ended Temporary Protected Status for U.S. residents from seven countries, including more than 250,000 Central Americans.

Repeat this for the next 5-6 years. Too many Republicans have lucrative contracts on retaing ownership of the separated children to give in to any humanitarian concerns about family.

I find it interesting that there is no condemnation of the man who started the zero-tolerance policy. We keep acting like he is sane and reasonable, but that is not true.

Lisa
Do a little research: it was Jeh Johnson who put Zero Tolerance in place in 2014 and touted it as a deterrent to illegal border crossings.That 2014 Zero Tolerance also separated children from parents , all as evidenced by the case of Flores vs Loretta Lynch first heard by Judge Dolly Gee in 2015 and then reversed in part and affirmed in part by the 9th Circuit in 2016.

Stuart, Perhaps you should do a little research. The POLICY was signed by our current president in April 2018. Zero Tolerance in fact means that in ALL cases children will be separated from their parents. That happened THIS YEAR. Not before.

Stuart, Perhaps you should do a little research. The POLICY was signed by our current president in April 2018. Zero Tolerance in fact means that in ALL cases children will be separated from their parents. That happened THIS YEAR. Not before.

I was researching for migration studies of United State Of America and coincidentally I saw this post and I was wondering I should Buy Research Paper for my new assignment.

From NPR - 1,820 children between the ages of five and 17 had been discharged from the government's custody and are now with parents or in the care of other sponsors. Of those, 1442 have been reunited with parents being held by U.S. Immigration and Customs Enforcement in two detention centers. The remaining 378 have either reached the age of 18 or are living outside a detention center in the U.S. with their parents, relatives or another adult approved by the Office of Refugee Resettlement. But as of the morning count, 711 children were still in ORR custody because their parents are either already out of the country, considered ineligible for reunification, or have waived their rights to their children.

Mr./Ms Cosgrove. You continue to try to avoid the real issues. You ignore the reality that non-English speakers, held in detention and scared out of their minds, might have signed "waivers" to their rights to their children without even knowing what they were doing.

A naive, young niece was once arrested in Turkey. Apparently she had unknowingly assisted a black marketeer when he offered to be her tour guide, took her for a drink at a lovely cafe overlooking the water, and then asked her to change some of his money into dollars. She had no idea what she was doing. She was arrested and put in jail. She was not provided English speaking translations of the documents that she was being intimidated into signing. Eventually someone from the US Embassy showed up and told her it was a good thing that she hadn't signed, because it was a confession and she would have stayed in a Turkish jail for a very long time.

Those kids would still be in detention if it hadn't been for the outcry from ordinary people through the media, an outcry that gave me a little hope that a little bit of compassion is still alive in our country. Thank God for the mainstream media who kept us informed about the travesty of justice and the totally un-christian policies being enforced at our border. Thank God for a free press. Everyone should pray that the current administration doesn't destroy it as they are working so hard to do.

Finally, the govt who lost kids in the "system", who deported people without their kids, who were responsible for this horror show, tried to duck their responsibilities and suggest that the non-profits who help these poor people take charge of reunification. I'm sure the non-profits could do a better job, but letting this administration get away with this would send a very bad message.

Most Americans are not cruel.