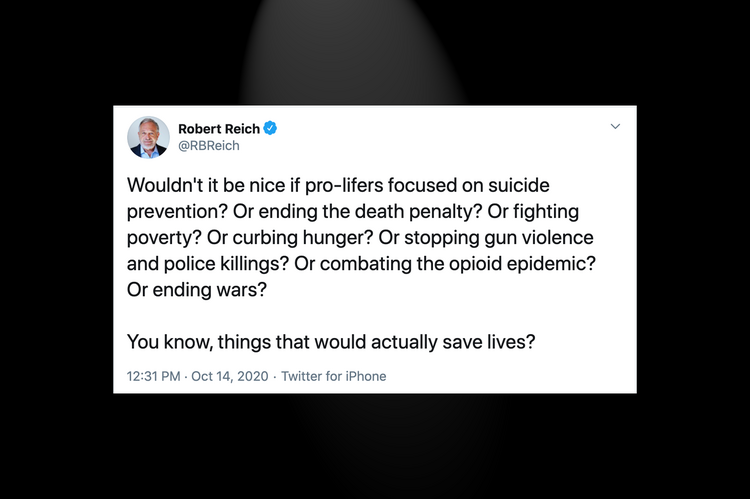 Former U. S. Secretary of Labor Robert Reich tweeted on Oct. 14: “Wouldn't it be nice if pro-lifers focused on suicide prevention? Or ending the death penalty? Or fighting poverty? Or curbing hunger? Or stopping gun violence and police killings? Or combating the opioid epidemic? Or ending wars? You know, things that would actually save lives?” His implication was that the pro-life movement does not consider other important political issues that threaten citizens of this country.

But Catholics in the United States make up a significant portion of the nation’s pro-life movement, and Catholic ministries do address many of the tragedies that Mr. Reich named in his statement.

Ministries exist throughout the country that aim both to prevent suicide and to support the family members and loved ones of individuals who have died by suicide. In 2012, Catholic Charities of the Archdiocese of Oklahoma City responded to the tragic deaths by suicide of five young people in their community by starting their own suicide prevention program, known as Cabrini Wellness Ministry. Counseling and social work professionals in the area’s Catholic Charities branch worked with the Oklahoma Department of Health and Substance Abuse Services to provide training for laypeople to spot warning signs of suicide and support those struggling with them. The professionals behind Cabrini Wellness Ministry have noted the church’s progress in teaching about suicide as making it more possible to do this kind of work in a religious context. In a Catholic Charities’ fall 2018 magazine, David Werning outlined this change: “Whereas an older [tradition] assumed damnation and did not allow a funeral, the Church now considers the role of mental issues and God’s grace.”

Catholics in the United States make up a significant portion of the nation’s pro-life movement, and Catholic ministries do address many of the tragedies that Robert Reich named in his statement.

This progress not only changes the nature of the church’s prevention work but allows clergy and laypeople to better respond to the tragedy of suicide when it does occur. LOSS, or Loving Outreach to’Survivors of Suicide, sponsored by Catholic Charities of the Archdiocese of Chicago, is a support group for people grieving the loss of a loved one to suicide. America reported on LOSS in 2018. The group is nondenominational and supports grieving people of all backgrounds. The Rev. Charles Rubey, who started this support network decades ago, has since counseled thousands of families in what he believes is a very personal and tragic moment for them. He has created a model grounded in remembrance of the lives of those lost, hoping to bring more compassion to the church’s response by highlighting real people’s stories and struggles. In the time of the coronavirus pandemic, LOSS has continued its support work virtually.

The Catholic Mobilizing Network is driven by a consistent pro-life ethic, and it works to educate Americans on the connection between systemic racism and the death penalty. Its members carry on the work that was started by Frank and Ellen McNeirney when they started Catholics Against Capital Punishment in 1992. When the U.S. bishops launched their Catholic Campaign to End the Use of the Death Penalty in 2005, the Catholic Mobilizing Network was instrumental in supporting their work. Its executive director, Krisanne Vaillancourt Murphy, spoke to America last month about her work’s foundation in the idea that racism is, in fact, a life issue.

[Related: Pope Francis closes the door on the death penalty in ‘Fratelli Tutti’]

“As Catholics [at C.M.N.], we believe the death penalty is unacceptable in all instances because it violates human dignity and deems certain lives invaluable,” she said. “But what D.P.I.C.’s report lays out so clearly is that the lives deemed worthless by our death penalty system are disproportionately Black lives and the lives of other people of color.”

Catholic advocacy against the death penalty is newly informed by Pope Francis’s anti-capital-punishment position in his latest encyclical, “Fratelli Tutti.”

The Network Lobby for Catholic Social Justice, founded by Catholic sisters, is a fierce advocate for economic justice and many related social justice issues. Its 2020 policy platform outlines plans to “mend the gaps” that exist in American society today, and a particular focus area is the wealth and income gap. Network’s three major platforms in this area concern tax justice, livable income and family-friendly workplaces. Its proposals include a robust increase in the federal minimum wage, paid family and sick leave, guaranteed employment and unemployment insurance, support for pregnant workers and protections for the rights of workers to advocate for their fair treatment in the workplace.

[Voting Catholic: How can Catholics help alleviate poverty in the United States?]

Catholic Relief Services has an international perspective on the devastation of global hunger. Recognizing that populations that are already vulnerable and marginalized are most likely to suffer from chronic hunger, C.R.S. considers this a pressing public health issue that prevents many people, and children in particular, from living safe and healthy lives. C.R.S. also recognizes that climate disasters and armed conflict can also create disruptions that prevent people from accessing food and continuing their livelihoods. As such, C.R.S. supports Food For Peace and Feed the Future, two U.S. programs focused on combating global hunger. The organization is active in national conversations about how to make these programs more efficient and effective.

The U.S. Conference of Catholic Bishops has spoken repeatedly about the need for gun violence prevention and has released several statements about confronting a culture of violence that expressly condemn gun violence. In addition to supporting the 1994 Assault Weapons Ban, the bishops stated in their 2000 pastoral statement, “Responsibility, Rehabilitation, and Restoration: A Catholic Perspective on Crime and Criminal Justice,” that they “support measures that control the sale and use of firearms and make them safer (especially efforts that prevent their unsupervised use by children or anyone other than the owner), and we reiterate our call for sensible regulation of handguns.”

In addition, in June 2020, three chairmen of committees within the bishops’ conference penned a letter to Congress that called for police accountability and improvements in the training and formation process for officers. They wrote: “Several policy proposals currently before you appear to take steps in the right direction. These include collection of data on use-of-force, training towards de-escalation, work to end racial profiling, doing away with chokeholds, using body cameras, greater accountability and means of redress regarding those who exercise public authority, and a commission to study the issue further and make additional recommendations.”

In 2017, America reported on the Catholic response to the opioid epidemic and shared the work of Bishop Edward Malesic of Greenburg, Pa., who wrote a pastoral letter called “From Death and Despair to Life and Hope” after overdose deaths in his county rose for the ninth consecutive year. Bishop Malesic collaborated with local experts who work with those addicted to drugs and also with former addicts themselves. This advisory group came up with educational resources and prayer efforts that the diocese could offer.

In 2019, John W. Miller wrote for America about the demand for new solutions to the epidemic and ways that churches could contribute. In it, he pointed out steps forward that could make collaboration with churches possible: “The upshot: Clinics are hiring pastors; faith-based groups like Catholic Charities are prescribing pills; and you hear people on both sides of science and religion saying basically the same thing.” The piece also profiled Nina Corona, whose daughter experienced addiction in her teen years and whose academic experience in theology informs the work she now does to raise awareness about drug use and addiction. Ms. Corona started We Thirst, an educational ministry, which has led to the creation of the nonprofit Afire (Active Faith Implementing Relief in the Epidemic). The two organizations offer dozens of educational resources, events and prayer groups.

The Catholic Church has a centuries-long history of anti-war positions, which James Martin, S.J., outlined in America in January 2020. Father Martin quoted St. John Paul II, who said to diplomats when Irag was invaded in 2003 that “the solution will never be imposed by recourse to terrorism or armed conflict, as if military victories could be the solution. War is never just another means that one can choose to employ for settling differences between nations.”