The teaching of the Catholic Church is clear: We are against war. 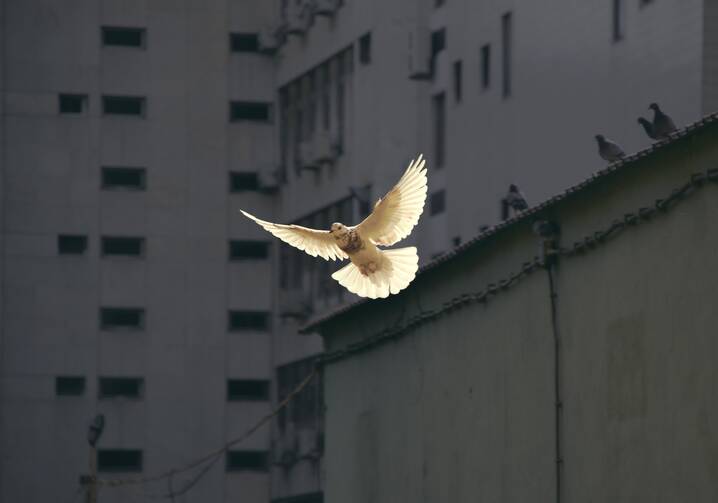 Photo by Sunyu on Unsplash

What is the Catholic stance on war? To answer that question, I could tell you about Jesus’ actions during the Passion, as recounted in the Gospel of Matthew. At one point, Jesus is arrested in the Garden of Gethsemane by a group bearing swords and clubs. Out of a desire to defend Jesus, one of his disciples takes out a sword and cuts off the ear of a guard. Jesus tells him, “Put your sword away. For those who live by the sword die by the sword.” In Luke’s Gospel, he then heals the man. Thus, Jesus’ final miracle before his Resurrection was one of reconciliation, after someone attacked him.

Or I could tell you about St. Francis of Assisi who, during the Crusades in the 13th century, accompanied the armies of western Europe to Egypt. Francis hoped to speak peacefully with Muslim leaders, even if it meant dying as a martyr. He crossed battle lines and was taken to the sultan, Malek al-Kamil, known as a wise ruler. They recognized in one another their mutual humanity, spoke about God, and after many days of dialogue, the sultan gave Francis an ivory gift, which is today in the Basilica of St. Francis in Assisi. Theirs was a model of not only interreligious dialogue but a dialogue of peace.

Or I could tell you about St. Paul VI before the United Nations, seven centuries later, in 1965, at the height of the Cold War. “It is enough,” Pope Paul said, “to recall that the blood of millions, countless unheard-of sufferings, useless massacres and frightening ruins have sanctioned the agreement that unites you with an oath that ought to change the future history of the world: Never again war, never again war! It is peace, peace, that has to guide the destiny of the nations of all mankind!”

Questions of war are complicated. But the teaching of the Catholic church is clear: We are against war. And the person who best explained this was St. John Paul II. For those who say, “The church doesn’t understand war or politics,” remember that John Paul lived under both Nazi and Communist regimes in Poland and, during his papacy, dealt with nearly every political leader on the world stage. Here is part of his address to diplomats in 2003, at the time of the invasion of Iraq:

“NO TO WAR! War is not always inevitable. It is always a defeat for humanity. International law, honest dialogue, solidarity between States, the noble exercise of diplomacy: these are methods worthy of individuals and nations in resolving their differences. I say this as I think of those who still place their trust in nuclear weapons and of the all-too-numerous conflicts which continue to hold hostage our brothers and sisters in humanity…. [F]aced with the constant degeneration of the crisis in the Middle East, the solution will never be imposed by recourse to terrorism or armed conflict, as if military victories could be the solution. War is never just another means that one can choose to employ for settling differences between nations.”

In this time of conflict, let us ask for the prayers of those who understood war and peace:

St. Francis of Assisi, pray for us.

Servant of God Dorothy Day, pray for us.

All holy women and men who have worked for peace, pray for us.

And may Jesus Christ, the Prince of Peace, guide our hearts into the way of peace.