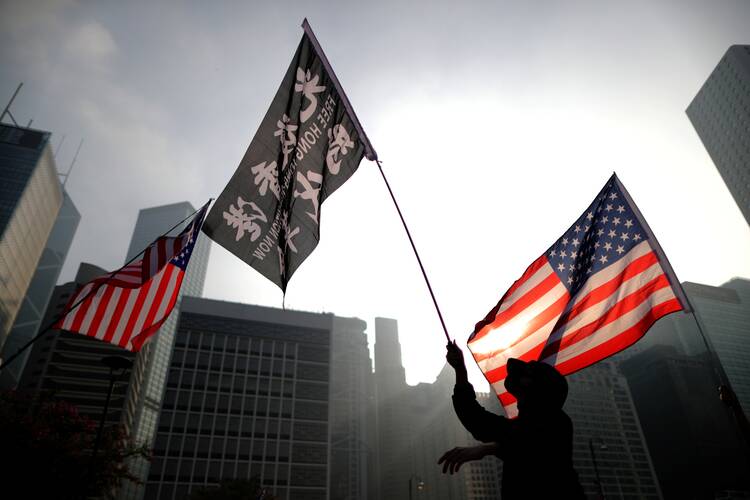 WASHINGTON (CNS) -- Nury Turkel, a Uighur American on the U.S. Commission on International Religious Freedom, who is a human rights advocate for Uighur Muslims and others persecuted for their religious faith, made Time magazine's 2020 list of the world's 100 most influential people.

"Commissioner Turkel has himself been subjected to hardships based on his religion as he was born in a reeducation camp at the height of the Cultural Revolution in China and spent the first several months of his life in captivity," said Gayle Manchin, the chair of the commission. "He has overcome so much and is very deserving of this recognition."

Tony Perkins, vice chair, said his advocacy work "has shed light on the plight of Uighur Muslims in China and elsewhere, and has led to policy changes designed to counter the Communist Party's genocidal actions against the Uighur people."

A USCIRF news release said Turkel, the first U.S.-educated Uighur attorney, "has worked tirelessly over the years to give back to the community, building up the Uighur human rights movement."

"He has assisted hundreds of people win asylum in the United States, addressing countless policy forums and legislative hearings, "and bringing the plight of Uighur people to the world’s attention, despite China’s best efforts to cover up its atrocities," the release said.

On Sept. 22, the same day Time released its list, the U.S. House in a nearly unanimous vote passed the Uighur Forced Labor Prevention Act, which would ban imports to the U.S. from China's Xinjiang region, the heartland of the Uighur Muslim people and where over 1 million Uighurs are reportedly living in forced labor camps. There also allegations of the forced sterilization of Muslims in the region.

The measure includes a "'rebuttable presumption' that all goods produced in the region are made with forced labor unless U.S. Customs and Border Protection certifies by 'clear and convincing evidence' that goods were not produced with forced labor."

"Dozens of major global brands are accused of complicity in the mass repression of China's Uighur Muslim minority by sourcing their supplies of cotton products from factories exploiting the people's forced labor," said a July 23 news story in Business Insider.

A coalition of more than 180 rights group say that roughly one in five cotton garments sold around the world contain cotton or yarn from Xinjiang, the story said.

"We cannot be silent. We must demand an end to these barbaric practices and accountability from the Chinese government," U.S. Rep. Chris Smith of New Jersey, the lead Republican on the bipartisan bill, said in comments from the floor before the vote on the Uighur Forced Labor Prevention Act.

"Chinese authorities initially denied the existence of mass internment camps and have tried to portray them as vocational training centers," he said. "The Chinese Communist Party (CCP) employed lies, censorship and economic coercion to stifle discussion of their crimes."

Smith, the ranking Member of the House Subcommittee on Africa, Global Health, Global Human Rights and International Organizations, recalled the number of hearings on the situation of the Uighur people, including the testimony of Mihrigul Tursun at a 2018 hearing.

"(She) recounted her ordeal of torture, sexual abuse and detention in one of China's 'mass internment camps' in Xinjiang," Smith said. "She broke down weeping telling us that she pleaded with God to end her life. Her Chinese jailers restrained her to a table, increased the electrical currents coursing through her body and mocked her belief in God."

Among other provisions, the Uighur Forced Labor Prevention Act:

-- Authorizes targeted sanctions "on any person responsible for the labor trafficking of Uighurs and other Muslim ethnic minorities."

-- Protects U.S. investors and consumers by requiring financial disclosures from U.S. publicly traded companies "about their engagement with Chinese companies and other entities engaged in serious human rights abuses in Xinjiang."

-- Directs the U.S. secretary of state "to determine whether forced labor or other crimes against Uighurs constitute crimes against humanity or genocide, and requires a diplomatic strategy to address these issues."