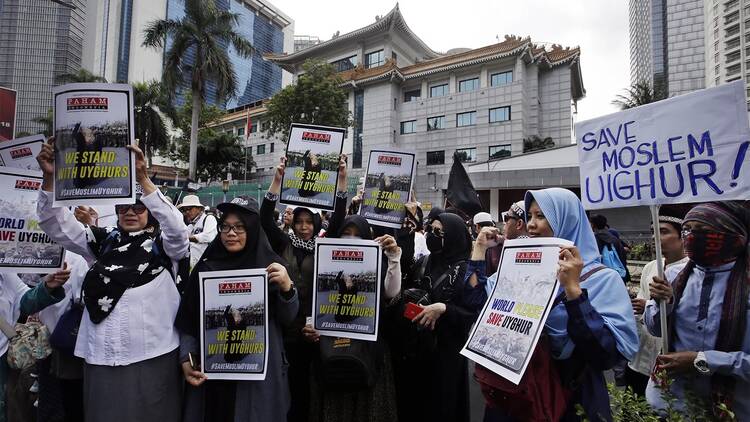 Muslim protesters rally outside the Chinese Embassy in Jakarta, Indonesia, on Dec. 21, 2018. Several hundred rallied outside the embassy in the Indonesian capital, demanding an end to mass detentions of Uighur Muslims in China. (AP Photo/Achmad Ibrahim)

(RNS) — Two new reports conclude that China is engaging in organ harvesting and a child separation campaign against the country’s Uighur Muslim minority.

China’s ambassador to the U.K., Liu Xiaoming, has denied a BBC investigation’s findings, which concluded that Muslim children in the Uighur-majority region of western Xinjiang are being systematically separated from their parents.

The extensive investigation, commissioned by the BBC and led by leading German researcher Adrian Zenz, has found that more than 400 Uighur children in a single township have lost both their parents to prison or China’s vast network of internment camps.

Chinese authorities have describe the camps as vocational education training centers aimed at curbing terrorism. But U.S. officials say that between 1 million and 3 million Uighurs have been arbitrarily imprisoned in “concentration camps” where detainees are indoctrinated and even tortured.

This “weaponization of education and social care systems” is critical to “the region’s hair-raising political re-education and transformation drive,” he wrote, and seems to be a pre-emptive measure against the potential fallout of China’s “war on terror” against Uighur resistance.

“Increasing degrees of intergenerational separation are very likely a deliberate strategy and crucial element in the state’s systematic campaign of social re-engineering and cultural genocide in Xinjiang,” Zenz wrote.

In southern Xinjiang, Chinese authorities have spent about $1.2 billion on building and upgrading kindergarten facilities, including large-scale expansions of dormitory space and extensive security measures.

In 2017 alone, the number of children enrolled in Xinjiang’s kindergartens spiked by more than half a million. Muslim minority children comprised over 90 percent of that jump, per publicly available government statistics.

In these schools, Uighur and other local languages are largely banned. State directives order schools to focus on “thought education.”

“Xinjiang’s schools have become like the colonial boarding schools used by the United States, Canada or Australia, to assimilate native ethnic populations,” Zenz concluded in his report.

Brownback also excoriated reports that Chinese authorities have subjected prisoners of conscience to forcible organ harvesting, which he said “should shock everyone’s conscience.”

The reports came from an independent tribunal initiated by the International Coalition to End Transplant Abuse in China, which confirmed long-standing allegations that China is forcefully harvesting the organs of marginalized people in prison camps, sometimes when patients are still alive.

“It is no longer a question of whether organ harvesting in China is happening. That dialogue is well and truly over,” said Susie Hughes, the group’s executive director.

On June 17, the tribunal reported that “forced organ harvesting has been committed for years throughout China on a significant scale,” making practitioners of the beleaguered Falun Gong spiritual movement one of the country’s main sources of organs. China banned the Falun Gong in the 1990s and has smeared the meditative discipline as an “evil cult.”

While Chinese officials announced the country would stop taking organs from executed prisoners in 2014, the tribunal concluded that the practice is still taking place.

The tribunal found that it was possible that Uighur Muslims’ organs have been sold against their will to the billion-dollar transplant industry.

Citing a lack of evidence that China has dismantled the infrastructure used for its organ transplantation industry, as well as the country’s inability to explain its organ sourcing, the tribunal said, the massive scale of the “concerted persecution and medical testing” of Uighurs suggests that “evidence of forced organ harvesting of this group may emerge in due course.”

The tribunal determined that it was “beyond reasonable doubt” that China is committing “crimes against humanity” and urged international courts to investigate whether the crimes rose to the level of genocide.

Forced organ harvesting, the tribunal wrote, “is of unmatched wickedness even compared — on a death for death basis — with the killings by mass crimes committed in the last century.”

This should please Donald Trump and his pro-life supporters.

What’s this have to do with Trump? TDS is on display amongst many of the readers here

But American companies do business with them all the time. When "intellectual" property is stolen, the "leaders" of our country go nuts and threaten all kinds of sanctions. But when humans are violated, though words are spoken, no capital is put at risk. So much for "pro-life" in the land of the free and the home of the brave.

Somehow, my comment was duplicated. It's not the first time. 'Sorry about that.

There was a time when America had the moral authority to publicly speak out against forced organ harvesting and separating children from their parents. Not anymore. Trump’s immoral policy of separating children from their parents, locking up the children in cages with inadequate and substandard care denigrates America’s place in the world. America now morally resides among “outlaw” countries that have long practiced inhumane policies.

The practices you describe were started by the Obama administration. Children were protected by separating them by age and sex from potential adult predators. The original photos that went viral were from 2014. So blame Obama. But the real question is why make that comment on an article on China. TDS on display.

This is a truly chilling article. I wish I knew how to help these people. For now I pray.