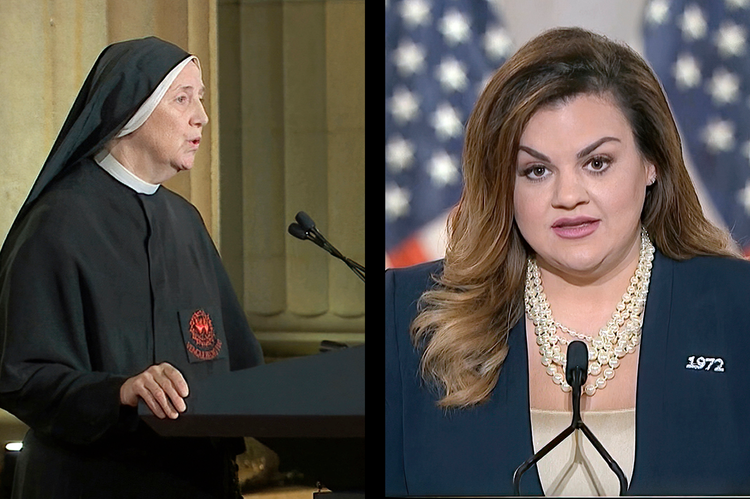 During the Republican National Convention this week, opposition to abortion has been one of the main themes, with many speakers praising President Trump as the “most pro-life president” ever. Three speeches in particular were clearly targeted as messages to the pro-life movement. Two speakers—Abby Johnson on Tuesday and Sister Deirdre “Dede” Byrne on Wednesday—were entirely focused on opposition to abortion, and a third, Nicholas Sandmann, spoke about how he had been vilified by media coverage, based on a selectively edited snippet of video that distorted his encounter with another protestor following the March for Life in 2019.

Last week, political speakers at the Democratic National Convention, as a member of the New York Times editorial board pointed out, didn’t mention abortion at all, except for “reproductive justice” being included among lists of other issues the party stands for. (Father James Martin, S.J., also included the unborn in his prayer at the convention.) Yet despite this silence, multiple speakers at the G.O.P. convention described the Biden-Harris ticket as the most pro-abortion campaign in American history. While the rhetorical gap between the two parties may seem unsurprising—after all, the defense of abortion has long been conducted in euphemistic terms, while opposition to it has often used provocative and grisly language—taking a look at the way the abortion-focused speeches have been covered by the media reveals a more profound disconnect.

Americans are not comfortable talking about abortion as a moral issue, and generally try to avoid discussing it altogether. In that gap, the Democrats’ defense of the status quo consists of trying to sweep abortion under the rug, while the Republicans’ focus on the issue aims more to rev up their base than to convince any voters to change their minds about abortion. This disconnect is clear not only in the speeches at the convention, but also in the way they have been covered in the media.

The G.O.P.’s inclusion of so many speakers opposing abortion has been treated as a victory by media outlets sympathetic to the pro-life movement, echoing the celebration of Mr. Trump for being the first president to address the March for Life in person this January. Meanwhile, outside the pro-life and pro-Trump media ecosystem, these speeches have been covered almost exclusively as controversial, rather than as attempts to convince or persuade people regarding their moral judgment of abortion.

While Fox News ran a “What to know about Abby Johnson” piece that focused on her conversion to the pro-life cause, Vice ran an article detailing the controversy over Ms. Johnson’s comments that it would be “smart” for police to racially profile her biracial son. And the 19th, a non-profit publication focused on gender and politics, pointed out tweets from Ms. Johnson in May supporting “household voting,” or allowing a husband to cast a vote on behalf of his wife. These takes on Ms. Johnson were quickly picked up in a number of other popular publications as well. After she spoke on Tuesday, while sympathetic coverage celebrated her unflinching and graphic description of an abortion, some journalists renewed questions about whether or not she had really been present at such a procedure, which an investigative report in Texas Monthly has disputed.

Sister Byrne’s impressive biography—she trained as a surgeon in the U.S. Army before entering religious life, rising to the rank of colonel and serving tours in Afghanistan as a reservist even during her religious formation—did not provide as much fodder for pre-convention coverage as Ms. Johnson’s history. But her speech was quickly fact-checked by N.P.R. and others for describing former Vice President Biden as supporting “late-term abortion and infanticide,” since Mr. Biden has been silent about his position on late-term abortions. (This line of fact-checking was then also criticized in turn by the National Review.)

Another aspect of Sister Byrne’s speech received almost no coverage, which unfortunately mirrored a gap embedded in the speech itself. She spoke about serving people “fleeing war-torn and impoverished countries all around the world. Those refugees all share a common experience. They have been all marginalized, viewed as insignificant, powerless and voiceless.” She then pivoted to focus on abortion, arguing that the largest marginalized group in the world is the unborn—but there was no further discussion of refugees, from her or any other speaker that night at the convention, and no acknowledgement that the Trump administration has gone to extraordinary lengths to block refugee resettlement.

Earlier this summer, a ground-breaking Notre Dame study found that most Americans do not typically discuss abortion and have not given careful thought to the issue—yet attitudes about abortion are more complicated than most surveys suggest. The wildly divergent coverage of this past week’s political conversation around abortion helps underscore why many people avoid discussing the topic at all, out of fear that divisions are so deep as to be unreconcilable.

Yet the study also concluded that Americans “are more inclined to enter conversations than debates, and would benefit from expanded education in science, law and moral reasoning.” Sister Byrne’s juxtaposition of refugees and the unborn, it seems, could have been one avenue into such a conversation, reflective of a “whole life” approach or echoing Pope Francis’ focus on a prophetic, rather than ideological, pro-life witness. But instead, the reference to refugees was used as an on-ramp to praise Mr. Trump as “most pro-life president this nation has ever had, defending life at all stages,” without ever betraying any recognition that Mr. Trump has demonized, rather than defended, refugees and immigrants.

The best key to understanding the speeches focused on abortion at the Republican convention—and the way they were covered in the media—is that they were not aimed to convince voters who are uncertain about abortion that it is wrong and must be opposed. Instead, they were aimed to convince voters already certain that abortion is wrong that such a conviction means they must vote for Mr. Trump. And the skeptical, and in some cases outright hostile, coverage devoted to these speeches was similarly working to reassure people who support abortion rights but are uncomfortable discussing it—so much so that the Democratic convention could not even use the word “abortion”—that they could safely ignore these speeches, too, as coming from an extremist anti-abortion movement, willing to twist the truth.

Biased and prejudiced coverage of abortion has severe costs. Nicholas Sandmann, who told the story in his speech of being depicted as an aggressor based on a few seconds of video in a confrontation he had not initiated, said that all the media cared about was “advancing their anti-Christian, anti-conservative, anti-Donald Trump narrative.” With years of experience of being covered unsympathetically, people in the pro-life movement are primed to agree—and when mainstream coverage seems aimed to dismiss and discredit anything opposed to abortion, their fears are confirmed.

Once discussions of abortion, and coverage of those discussions, has been reduced to advancing a narrative, the details of that narrative are beside the point. And the moral judgment of abortion is presumed and exploited, as it was in both parties’ conventions, rather than argued for. No one changes their minds about abortion under such conditions. And whether your moral goal is to guarantee access to abortion or to protect the lives of the unborn, we should all recognize that our political conversation about abortion is organized around partisan objectives rather than moral values.

[Read this next: Should abortion be the most important issue for Catholic voters? Here’s a better question.]

Correction, Aug. 27: The article has been updated to include a reference to Father James Martin, S.J.'s prayer at the Democratic National Convention.

Sam Sawyer, S.J.
@SSawyerSJ
Show Comments ()
Join the conversation: Login or create an account
Before you can comment, you need to update your profile to include your first and last name, as required in our comments policy. Then reload this page and you'll be set up for commenting. Update your profile