Explainer: If Donald Trump wins, what does that mean for abortion policies? 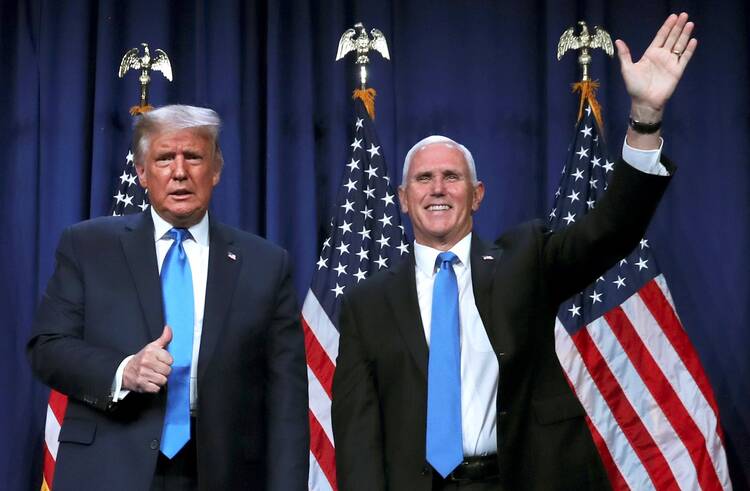 What will happen to the Supreme Court?

A dominant issue for many pro-lfe voters for almost half a century now, since Roe v. Wade and Doe v. Bolton became the law of the land in 1973, has been legalized abortion. Almost every candidate proposed for the court in the last few decades has been grilled on his or her stance on abortion, privacy rights and judicial activism.

A Trump victory in November would likely mean at least one more anti-abortion appointment to the Supreme Court, following up on Mr. Trump’s appointments of Neil Gorsuch and Brett Kavanaugh to the bench. Given Ruth Bader Ginsburg’s ongoing health issues, it seems likely she will resign her seat at some point in the next four years, giving Mr. Trump the opportunity to appoint a third justice to the nine-person court. Mr. Trump has fairly consistently relied on the advice of The Federalist Society, a conservative judicial advocacy organization, in making judicial appointments, so it is likely that any candidate to replace Justice Ginsburg will have strong conservative bona fides, including support for overturning Roe v. Wade as federal law.

Some of the other justices are no spring chickens—Stephen Breyer, for example, is 82 years old—so the next four years could see a radical remaking of the Court.

A Trump victory in November would likely mean at least one more anti-abortion appointment to the Supreme Court.

Will Roe v. Wade be overturned?

Unlikely, at least any time soon. For all that the Supreme Court tilts conservative these days, the justices are conservative in more than one sense of the word. They are also cautious about overturning established law. The last major direct challenge to Roe v. Wade, Casey v. Planned Parenthood in 1992, took place during a Republican administration with a court stacked with Ronald Reagan’s and George H.W. Bush’s appointees—and yet the justices (in a plurality opinion written by three of those appointees) ruled that the “essential holding” of Roe v. Wade remained valid.

While many politicians and activists assume that Mr. Trump’s appointments mean that a majority of the justices now disagree with both Roe and Casey, those decisions were not immediately overruled. At the end of this term, Chief Justice Roberts concurred with the court’s liberal wing in striking down a Louisiana law regulating abortion clinics, arguing that the case was basically identical to a Texas case four years earlier in which he had dissented, and should be decided according to this precedent. Whether and when five justices will be willing to overrule the central precedents established in Roe and Casey is impossible to predict with any certainty, though conservative appointees replacing retiring liberal justices would surely make it more likely than it is right now.

A variety of abortion challenges are likely to continue to come before the court, as many states, particularly in the South, have moved to regulate abortion clinics more strictly in the last two decades.

What will be the consequences on the state level?

A variety of abortion challenges are likely to continue to come before the court, as many states, particularly in the South, have moved to regulate abortion clinics more strictly in the last two decades. In some cases, as in the recent Texas and Louisiana cases, these regulations would have sharply reduced the number of abortion providers operating in a state. As similar cases arise, even if they do not result in striking Roe v. Wade from federal law, they may establish greater judicial deference to state limits on abortion, as the meaning of Casey’s “undue burden” test for laws regulating abortion tends to be determined by the court’s swing vote, which is currently that of Chief Justice Roberts.

A Trump victory in November would likely embolden those efforts, especially given the support for the pro-life cause by white evangelicals and Catholics. Other states, however, including populous states like California and New York, have tried to codify into state law the most permissive standards for legal abortion the country has ever seen. Even if Roe and Casey were overruled, these permissive abortion laws would stand.

Will abortion rates increase or decrease in a second term for Mr. Trump?

They will likely continue to fall—unless Covid-19 undercuts the American economy. As we noted last week, abortion rates and the absolute number of abortions have both fallen consistently for the past decade and are now at their lowest level since the Roe v. Wade decision in 1973. Abortion rates and the number of abortions in the United States are usually not determined by abortion policies at the federal or state level but by economic forces. Empirically, the more people are forced into subsistence-level existence, the more abortions increase.

Where will the Catholic vote fall?

The Biden/Harris ticket has essentially gone all-in for the pro-choice vote, despite Mr. Biden’s public show of his Catholic faith. Mr. Trump will surely benefit from some traditionally Democratic Catholic voters who will feel they cannot vote for the Biden/Harris ticket in good conscience, even if Mr. Trump does not prioritize any pro-life goals beyond appointing justices likely to overturn Roe.

As a “wedge issue,” abortion may be less important than in previous presidential races, thanks to the all-encompassing chaos caused by Covid-19 and the widespread disapproval of Mr. Trump’s response to the pandemic. In a Pew Research Center poll released earlier this month, 40 percent of all registered voters said abortion was a “very important” issue for them, down from 45 percent at the same time four years ago. Only 35 percent of Biden supporters said abortion was very important, down from 50 percent of Hillary Clinton supporters in 2016; but among Trump supporters the share saying that abortion is very imporant rose from 41 percent to 46 percent. (There was no separate data for Catholic voters.) Meanwhile, the U.S. Conference of Catholic Bishops has remained stalwart in prioritizing opposition to legal abortion in its guidance to Catholic voters.

[Read this next: How Trump is able to exploit the abortion issue, and why that’s bad for everyone]