A new guide explains the hidden ministry of exorcism

A new guide explains the hidden ministry of exorcism 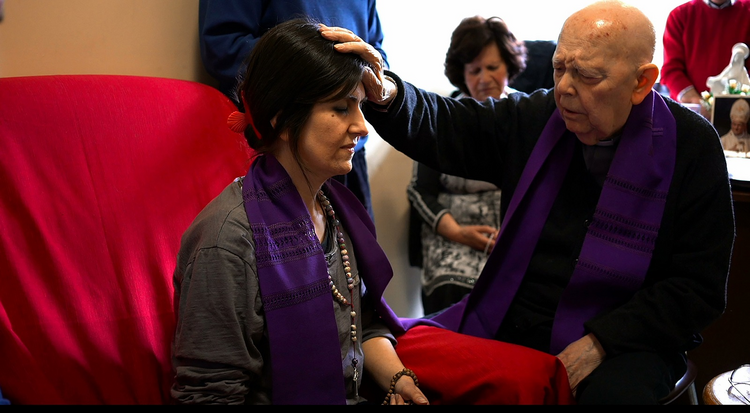 Pauline Father Gabriele Amorth performs an exorcism on Christina in the documentary "The Devil and Father Amorth." (CNS photo/LD Entertainment)

VATICAN CITY (CNS) — One kind of ministry, by its nature but also church mandate, shuns the limelight and remains discreet: exorcism.

“If an untrue image of the exorcist’s ministry has spread among the general public, this is due not to the discretion with which good exorcists proceed, but to the lack of professional honesty” in the media, said Father Francesco Bamonte, president of the Rome-based International Association of Exorcists.

Media outlets that “have not sought the truth in regard to exorcism, but, speaking about something they do not understand, they sensationalized it for ideological or simply economic reasons,” he told Catholic News Service in an email response to questions.

Now a new guide compiled by the international association and approved by the Vatican aims to provide an authoritative, up-to-date and accurate look at the quiet backstage ministry of exorcism.

Father Bamonte, a member of the Servants of the Immaculate Heart of Mary, told CNS Aug. 12 that the association first created the guidelines as a response to the many questions, concerns and difficulties expressed over the years among its 800 members worldwide.

The aim of the Vatican-approved association is to help exorcists and their assistants share experiences and best practices among themselves. And while exorcists already have official texts to refer to in their ministry, the guidelines are meant to “clarify many obscure and mistaken aspects” about exorcism, he said.

“Guidelines for the Ministry of Exorcism,” a 300-page text, was originally published as a private reference book, reserved for “internal use only” by the group’s members.

However, Father Bamonte said many priests and some bishops asked that the text be made commercially available to the general public, too. They thought it would be a “good catechetical and pastoral tool that would counterbalance the many publications that emphasize the sensationalistic aspects of demonic activity,” he said.

The association got the green light to make it public from the Vatican dicasteries that approved the text and from Cardinal Angelo de Donatis, papal vicar of Rome, who granted the text’s imprimatur. The guidelines, currently only available in Italian, went on sale in mid-July; it will be “at least a year” before the Vatican-approved English version is published, Father Bamonte said.

Unfortunately, it’s not just the general public that is poorly catechized about this ministry, it is even overlooked in most seminary formation and theological studies, he said.

“It almost always takes personal initiative” for someone to learn about this field, he said, and the new book provides an important introductory overview of the principles, theology and Gospel accounts of this ministry.

Exorcism, which is a specific form of prayer, is when the church asks publicly and authoritatively in Christ’s name that a person or object be protected against the power of the devil and withdrawn from the devil’s dominion, according to the Catechism of the Catholic Church.

In its simplest form, exorcism is performed at the celebration of baptism as part of preparing the candidate for receiving the grace of the sacrament of baptism.

However, the more solemn form, called “a major exorcism,” is what most people picture — the rite directed at expelling a demon or liberating someone from demonic possession through the spiritual authority that Jesus entrusted to his church. It can be performed only by a priest and with the permission of the bishop, and he must proceed with prudence, strictly observing the rules established by the church.

It is “decidedly worrying,” Father Bamonte told CNS, that the reality of the demonic world gets such little attention or is even repudiated by some Catholic educators, especially if they are involved in the spiritual, pastoral and theological formation of seminarians and candidates for religious life.

The widespread “ignorance” of demonic activity and phenomena results in “a great impoverishment in formation,” he said.

It means the majority of ordained men are not immediately able: “to guarantee profound spiritual direction; to offer an appropriate catechesis to the faithful on the existence and activity of the devil; and to address the serious problems related to the increase in occult practices,” which has opened the door to “increasingly virulent,” extraordinary activity by the devil, he said.

A priest who shows compassion, wisdom, prudence and integrity is not enough, he said; priests and seminarians must have specific preparation and guidance, including following church instructions regulating this ministry, which the new guidelines provide.

The priority of every priest is evangelization with Christ at the heart, he said.

But authentic evangelization does not clash with “the mystery of iniquity” and must include a reflection on the origin, presence and meaning of evil in the universe, which was “created good by God.”

During their studies, Father Bamonte said, seminarians should meet at least once with an exorcist priest, who explains his ministry, so that “the figure of the exorcist priest would become more familiar to future priests, setting up a future and more fruitful collaboration between them, for the benefit of our brothers and sisters afflicted by the evil one.”

An exorcist is not “superman” or a magician, “he is a simple priest, minister of Christ and his church,” he told SIR, the news agency of the Italian bishops’ conference, July 30.

Provide feedback on this article
Join the conversation: Login or create an account
Before you can comment, you need to update your profile to include your first and last name, as required in our comments policy. Then reload this page and you'll be set up for commenting. Update your profile
Advertisement
More: Vatican / Sacraments / Religious Life