‘We’re on the verge of putting children on the streets.’ Covid-19 devastates the hospitality industry 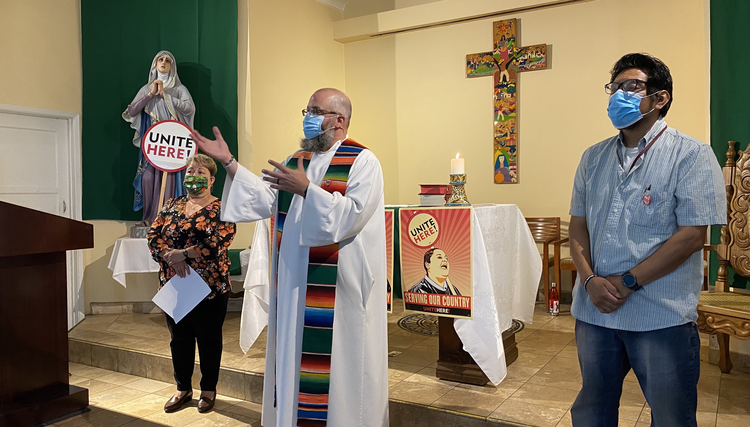 For some, the Covid-19 pandemic means opting for takeout over in-person dining at their favorite restaurant and postponing their summer vacations. But for others, the pandemic means no job, unpaid bills and even imminent homelessness.

That is true of Liliana Hernández, a Los Angeles-area hotel housekeeper laid off in March. “We’re a very vulnerable people right now,” she told America. “We’re afraid we’ll become homeless. Hopefully, our government can do something to help Angelenos and all the people of the United States.”

Hotels nationwide were reporting a 60 percent vacancy rate in early July, leading to a loss of $40 billion in hotel room revenue since mid-February, according to the American Hotel and Lodging Association. While the number of jobs in the leisure and hospitality industry ticked up in June, that sector still had a 29 percent unemployment rate, according to the Bureau of Labor Statistics.

“We’re hoping this pandemic stops so people come to L.A. for tourism. If that doesn’t happen, we won’t get our jobs back,” Ms. Hernández said. “We’re not people that are used to being dependent on the system. We like to work every day.”

Typically, hotel workers receive two checks a month, she said. One goes to pay the rent and the other goes to paying other bills and necessities. “We are in the hole without savings,” Ms. Hernández said. The situation is especially dire in Los Angeles, where the average rent for an apartment is more than $2,000 a month.

“We’re not people that are used to being dependent on the system. We like to work every day.”

Ms. Hernández, who immigrated from Mexico City 19 years ago, is a member of the Unite Here Local 11 union, which includes many hotel industry workers. The union has helped her coworkers, many of whom do not speak English, navigate the unemployment system. The union is also helping with food and is lobbying for housing assistance. Gov. Gavin Newsom of California has extended a moratorium on evictions through the end of September.

“It’s not a rent moratorium. It’s an eviction moratorium,” noted the Rev. Bridie Roberts, a United Methodist pastor who works with Unite Here Local 11. But she also said that the moratorium is not always being observed or enforced. “Some people are just leaving [their homes] because they don’t understand the law,” she said.

Unite Here Local 11 has more than 32,000 members, 90 percent of whom are currently unemployed, according to Hannah Petersen, a community organizer who served in the Jesuit Volunteer Corps in Peru. That makes health insurance a vital concern, given that California is seeing an escalation in the number of Covid-19-related deaths in recent weeks.

Many Unite 11 members are Catholic. Ms. Petersen has helped organize online Masses for members with the Rev. Michael Gutiérrez at St. John the Baptist Church in La Puente and Brendon Busse, S.J., at Dolores Mission.

“I hear a bit of despair. People really are struggling,” Ms. Petersen said. “But I also hear people want to help others. That brings me great hope. All we know is we can do things together.”

Father Busse, who celebrated a virtual Mass for workers on June 20, said community needs are varied. “Food you can share. There’s an excess of food in our society anyway,” he said. “But rent is more complicated. Most of our people are struggling with the anxiety of how to pay rent and how to pay the bills.”

“Hospitality work is the most sacred work of finding a place in your heart to welcome others. But our society doesn’t make space for them.”

Many cannot work from home and, when possible, are returning to the workplace to earn a much-needed paycheck, Father Busse told America. That urgency is illustrated by higher Covid-19 infection rates among low-income and minority communities. The Centers for Disease Control and Prevention notes that “some racial and ethnic minority groups are disproportionately represented in essential work settings such as healthcare facilities, farms, factories, grocery stores and public transportation.”

“Not everyone is equal as far as how you decide to go to work. We’re seeing that in the numbers,” Father Busse said. “They put themselves at risk for their children and their families. It’s a beautiful, Christian sacrifice. But they shouldn’t be forced to make that choice.”

The grace of the pandemic has been in “getting back to what’s important,” he said. In preparing the Mass for hospitality workers, Father Busse has been struck by how much they exemplify the call of the Gospel. “Hospitality work is the most sacred work of finding a place in your heart to welcome others,” he said. “But our society doesn’t make space for them.”

Jesus and the Catholic Church teach “radical hospitality,” he said. “Accepting people where they are. Where do we freely choose to give space for other people?”

Father Busse also drew a distinction between owners and renters—that is, “people of privilege” and those from lower-income backgrounds. Often, it is those who are wealthy who think they do not have enough, he said.

“The wealthiest seem to be the most afraid. And they have the most,” he said. Yet for those from lower-income families, “their model is of abundance, that we have enough to go around,” he said.

“What does it mean when we don’t believe we have enough?” he asked, calling it a question of faith. “Am I interested in defending myself, or am I interested in serving others? Am I making space for other people in my framework of how I make choices?”

It becomes a question of moral culpability, Father Busse said, adding that there has been “a systematic failure in leadership to keep people safe.”

“We’re on the verge of putting children on the streets,” he said. “Their parents will go to work in dangerous places, but...everyone else isn’t bearing the burden they could bear.”