The Editors: The coronavirus is exposing our society’s deep inequalities 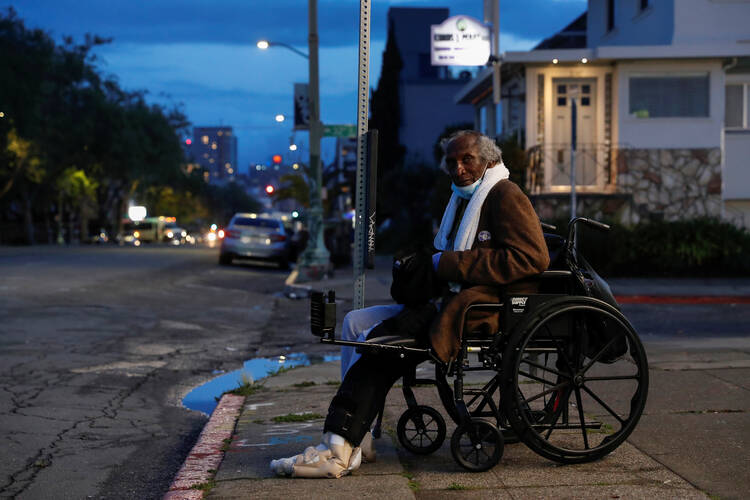 A man in Oakland, Calif., waits for a bus April 6, 2020, during the coronavirus pandemic. (CNS photo/Shannon Stapleton, Reuters)

Andrew Cuomo, the governor of New York, called Covid-19 “the great equalizer” in a tweet on March 31, and he is correct that illness and death do not, in the end, respect power and privilege. This does not mean that social inequities no longer matter. In the influenza pandemic of 1918, death rates were much higher for those in poorer, more crowded neighborhoods, and there is already evidence that the coronavirus is spreading more quickly among low-income households and among black Americans, in particular.

People with disabilities fear discrimination if they need medical care, especially if the specter of “rationing” arises.

For some Americans, the most difficult aspects of the pandemic are cabin fever and becoming accustomed to social distancing, a phrase with decidedly un-Christian connotations. For many millions of other Americans, complete social distancing is not an option. Health care workers must remain on the front lines fighting the virus, and public safety officials must be as vigilant as ever. Grocery and drugstore employees, as well as delivery workers in trucks or on bicycles, are still on the job, having to spend much of their time cleaning everything they or their customers touch.

These and other essential workers are concentrated in poorer neighborhoods, and The New York Times recently reported that although subway ridership overall in the nation’s biggest city was down 87 percent, it was down by only about half in certain stations used by low-income workers. Working from home is simply not an option for most of the people who are fortunate enough to remain employed.

Many of these essential workers have young children and cannot devote several hours a day to home-schooling or making sure that their children keep up with their peers. Children who cannot be left unattended may be sent to friends’ or relatives’ homes during the workday, increasing the risk of spreading the virus.

The coronavirus is also an omnipresent threat to the thousands of asylum seekers and other migrants stranded in detention centers and in makeshift camps on the other side of the U.S.-Mexico border.

Millions of other Americans live in group settings where they have little or no control over how many people are in close proximity to them. First, there are 1.5 million residents in nursing facilities, like the residence in Washington State where dozens died of the coronavirus in one of the earliest outbreaks in the United States.

There are also more than two million people in correctional facilities at any given time, and about 200,000 people flow in and out of jails every week. Add half a million correctional officers and bailiffs, and it is no wonder that prisons have become hotspots for the coronavirus, leading Pope Francis to urge authorities “to be sensitive to this grave problem.”

In addition, about 1.3 million people are active-duty military personnel, many in crowded conditions like those on the aircraft carrier Theodore Roosevelt, whose captain was fired after writing simultaneously to multiple superiors with a warning that the virus was spreading through his crew.

Then there are the half-million homeless people in the United States who must take their chances in overcrowded soup kitchens and shelters.

The coronavirus is also an omnipresent threat to the thousands of asylum seekers and other migrants stranded in detention centers and in makeshift camps on the other side of the U.S.-Mexico border. Within the United States, undocumented migrants have good reason to fear seeking health care and risking deportation. Recipients of the Deferred Action for Childhood Arrivals program, many of whom work in health care, must worry about both the pandemic and the possibility that the Supreme Court will uphold the Trump administration’s decision to rescind the program and remove their legal status.

Millions of other Americans live in group settings where they have little or no control over how many people are in close proximity to them.

Other groups have added difficulties in accessing health care and even getting accurate information about the pandemic, including those without internet access and non-English speakers. People with disabilities fear discrimination if they need medical care, especially if the specter of “rationing” arises. Americans who are losing employer-sponsored health insurance because their jobs have vanished—a group that grew by 3.5 million in just two weeks, by one estimate—fear falling through the cracks if they need immediate medical attention.

A Special Message from the Editor in Chief
Matt Malone, S.J.

The intent here is not to mock those who are trying to make the best of quarantine and social distancing, whether by spending more time with family, learning how to bake bread or trying to emulate Shakespeare, who supposedly passed the time in quarantine from the plague by writing “King Lear.” But most people cannot approach the coronavirus as an opportunity for reflection or self-improvement.

Praise God if your family gets through this, but do not presume that everyone is as fortunate, or that the pandemic is over when some of us are able to take tentative steps toward normal life. Remember what Arturo Sosa, the superior general of the Society of Jesus, recently said about the crisis: “We are one humanity.... Each and every one of us is part of it; no one is left out; no one of us can do without the others.”