In Italy, mourning families seek justice for victims of coronavirus

In Italy, mourning families seek justice for victims of coronavirus 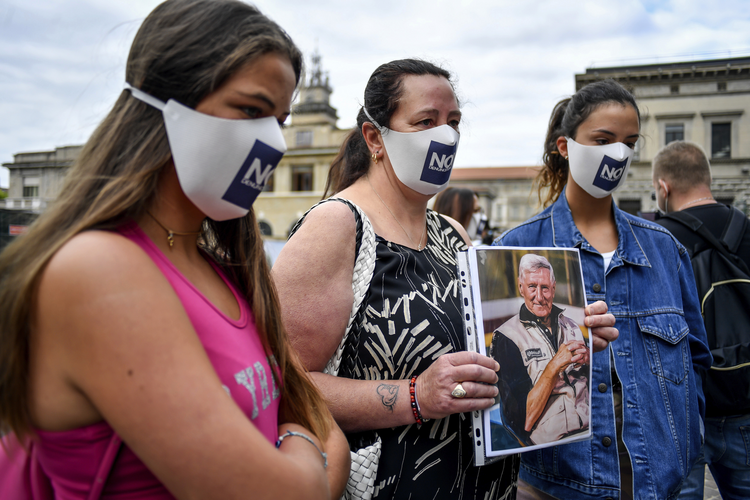 Members of Noi Denunceremo (We will denounce) group arrive at Bergamo's court, Italy, Monday, July 13, 2020. Lawyers for the Noi Denunceremo (We Will Denounce) Facebook group and an affiliated non-profit committee are filing 100 new cases Monday with Bergamo prosecutors investigating the outbreak, on top of 50 complaints lodged last month. (Claudio Furlan/LaPresse via AP)

ROME (AP) — It started out as way for grief-struck families to mourn their coronavirus dead online: a Facebook group where relatives who were denied a funeral because of Italy’s stringent lockdowns could share photos, memories and sorrow that their loved ones had died all alone.

But this spontaneous virtual forum for eulogies, anguish and condolences has now turned into an influential activist group that is providing a steady stream of testimony and evidence to prosecutors investigating whether any crimes contributed to Italy’s COVID-19 toll.

Members of the Noi Denunceremo (We Will Denounce) Facebook group and an affiliated non-profit committee filed some 100 new cases Monday with Bergamo prosecutors investigating the outbreak, on top of 50 complaints lodged last month.

Wearing a face mask with the group's logo outside the tribunal Monday, We Will Denounce co-founder Stefano Fusco said the complaints don't accuse anyone specifically of wrongdoing.

“We simply tell our stories and ask the prosecutors to investigate about what happened here and why ... there was such a huge massacre," he said.

The case files and Facebook posts paint a visceral portrait of the lives swept up in Italy’s devastating coronavirus outbreak, the first in the West: of mothers and fathers taken away by ambulance and never seen alive again by their children; of frantic efforts to locate vacant intensive care beds and impossible-to-find oxygen tanks; of hospitals so overwhelmed trying to save the living that relatives of the dead were often just an afterthought.

“It’s a system that didn’t hold up, a system that had to choose who to save and who not,” said Diego Federici, 35, who lost his otherwise healthy mother and father to COVID-19 in just four days in March.

Federici believes that neither of his parents was treated adequately. He says his mother was essentially sedated until she died and then her body was transported to Bologna, 250 kilometers (155 miles) away, to be cremated because Bergamo’s crematoriums and cemeteries were full.

“There are too many doubts, too many things that were done badly,” he said in a telephone interview.

Compiled by sons and daughters, widows and widowers, the majority of cases that We Will Denounce has filed with prosecutors concern deaths in northern Lombardy's provinces of Bergamo and Brescia, where the outbreak erupted in late February. The two provinces fast became ground zero of the European epidemic and together account for around a quarter of Italy’s 35,000 official COVID-19 deaths.

Experts believe the true number of coronavirus deaths is much higher, in Italy and elsewhere, due to testing limitations.

“We are certain that with 35,000 dead, they can’t go and cover up everything as has unfortunately occurred with other Italian tragedies,” said Fusco, who co-founded We Will Denounce with his father after the March 11 death of the family patriarch, Antonio.

Many members of the group assert that the failure of regional and national political leaders to seal off virus-afflicted areas in Bergamo and Brescia early on allowed the contagion to spread throughout Lombardy and overwhelm its health care system, eventually leading to the West’s first nationwide lockdown.

Bergamo prosecutors have already questioned Italian Premier Giuseppe Conte, the health and interior ministers, as well as members of Lombardy’s regional government and industrial leaders. They also interviewed We Will Denounce members whose posts helped spark the investigation. No charges have been filed and it’s not clear if any will be.

But simultaneously with Monday’s filing, We Will Denounce sent a letter asking the European Commission and the European Court of Human Rights to supervise the Italian investigation, alleging that crimes against humanity are involved and that Italian citizens' right to life and dignity were violated.

The group's attorney, Consuelo Locati, whose father died during the outbreak, cited two regional decrees that she says contributed to the deaths: A March 8 decree allowing recovering COVID-19 patients to be housed in nursing homes, and a March 23 decree essentially instructing Lombardy’s general practitioners to treat suspected virus patients by phone, not in person.

The directive to treat by telephone, Locati said, violated the patients’ constitutional right to health care. Many relatives of virus victims say during the peak of the outbreak, their family doctors were themselves sick or declined to conduct in-person visits. Locati says they were essentially prevented from doing so by the regional government, which was struggling to provide adequate protective equipment for health care workers.

“This prohibition of doing house visits is found in so many complaints, and so much testimony: of the doctor who won’t go out or who can’t go out, the doctor who prescribes antibiotics via telephone,” she said.

The effect was that patients died at home or waited too long to go to the hospital and were then too sick to be saved, she said.

“They could have come to check him earlier. A doctor even told us: ‘You should have hospitalized him earlier,’" said Sharon Potta, whose 51-year-old father died and who was at the Bergamo tribunal Monday filing her case.

Potta said ambulances refused to come to the house when her father fell ill, and the family couldn't leave because of the lockdown. “What were we supposed to do?"

The Lombardy regional government has strongly defended its handling of the pandemic, pointing to the heroic efforts of doctors and nurses there and the region’s successes in adding intensive care beds to keep up with demand. At the same time, though, regional officials have acknowledged shortcomings.

Lombardy’s governor, Attilio Fontana, has appointed a committee of five experts to review “what worked less well and what worked well” as the region looks to identify what part of the health care system “should be looked at again, modified and corrected.”

“We are all ready to recognize if errors were committed — if they were committed — but underlying that is the fact that we found ourselves in the middle of a cataclysm that no one ever expected,” Fontana told a June 29 press conference when asked about the We Will Denounce complaints.

Stefano Fusco said he never expected his Facebook group would grow as quickly as it did and turn into a juggernaut of activism pressing for justice for Italy’s virus dead.

The main rule of the group is to keep politics out of posts and not accuse anyone directly of wrongdoing.

“It’s simply to remember someone, and give a face to the numbers, because during the pandemic the dead were just numbers. But to us, behind 100 dead there are 100 families who are suffering,” Fusco said.

What is remarkable is that the posts are so similar, and are responded to with an outpouring of condolences and broken heart emojis from strangers, many of whom have clearly endured the same fate.

Ludovica Bertucci wrote the Facebook group recently, eulogizing her dead father, grandparents and uncle and asking if anyone was to blame for her loss: “I’m afraid of the answer ... afraid of discovering that if someone had taken a different decision, maybe my stupendous father would be here with me, together with all the others.”