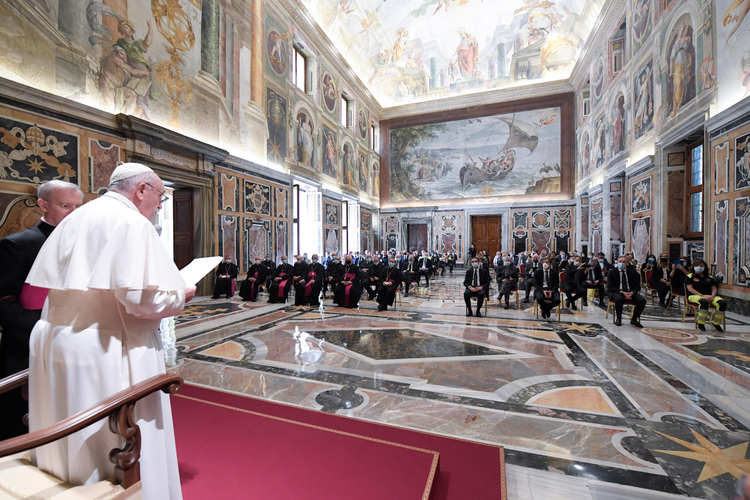 Pope Francis adresses doctors and nurses from the coronavirus-ravaged Lombardy region, at the Vatican, Saturday, June 20, 2020. Francis told the delegation on Saturday that their example of professional competence and compassion would help Italy forge a new future of solidarity. The northern region of Lombardy, Italy’s financial and industrial capital, was the hardest-hit region in the onetime European epicenter of the pandemic. (Vatican News via AP)

Pope Francis today gave his first public audience since Italy and the Vatican imposed lockdown in early March to representatives of the “heroic” doctors, nurses and other health workers from the northern Italian region of Lombardy, which was— and still is—the area worst hit in the country by the pandemic.

“You have been one of the pillars of the whole country. To you here and to your colleagues throughout Italy go my esteem and my sincere thanks, and I know well that I interpret the feelings of everyone,” Pope Francis said as he greeted them in the Vatican today.

The medical staff present at today’s audience wore masks and respected the social distance required by the law. So too did the others present as the pope spoke: representatives of the civil and religious authorities from Lombardy, as well as the neighboring regions of Piedmont, the Veneto and Emilia Romagna that also suffered much in these past months.

“In the whirlwind of an epidemic with shocking and unexpected effects, the reliable and generous presence of medical and paramedical staff was the sure point of reference, first of all for the sick, but in a very special way for their families, who in this case did not have the opportunity to visit their loved ones,” Pope Francis said.

He told the health workers that the families of the victims “found in you almost other family members, capable of combining professional competence with those attentions that are concrete expressions of love.”

Throughout the pandemic, Pope Francis has frequently praised and thanked the doctors, nurses, paramedics and other hospital staff for their courageous service to those struck by the virus.

Today, he hailed them as “a visible sign of humanity that warms the heart” and recalled that “many of them fell ill and some unfortunately died in the exercise of their profession. We remember them in prayer with much gratitude,” the pope said of the more than 160 doctors and no less than 40 nurses who died.

Francis recalled that the patients in the hospitals suffering from the virus “often felt that they had angels beside them, who helped them to recover their health and, at the same time, comforted, supported and sometimes accompanied them to the threshold of the final encounter with the Lord.” Indeed, he said, “These health workers, supported by the solicitude of the hospital chaplains, have witnessed God’s closeness to those who suffer; they have been silent craftsmen of the culture of closeness and tenderness,” he said.

He recalled health workers calling family members of their patients with their personal cell phones so that the dying could say goodbye to their loved ones: “This has been good for all of us. This witness of closeness and tenderness.”

Pope Francis told the doctors and nurses present—and all those they represented—that the whole world has seen the work they have done in a situation of great trial. “Even if exhausted, you have continued to commit yourselves with professionalism and self-denial. And this generates hope. You have been one of the pillars of the whole country.”

Turning to the present day, which finds Italy coming out of lockdown, Francis told his audience and the rest of Italy, “Now is the time to treasure this positive energy that has been invested.” He described it as “a wealth that in part, certainly, has been lost in the tragedy of the emergency, but said it can and must bear fruit for the present and future of Italian society.”

He encouraged them to start afresh, inspired by “the countless testimonies of generous and gratuitous love, which have left an indelible mark on consciences and on the fabric of society, teaching how much there is a need for closeness, care and sacrifice to nourish fraternity and civil coexistence.”

He reminded them, as he did in his memorable extraordinary Urbi et Orbi blessing at the peak of the pandemic in Italy, that the way out of the crisis is to go forward “not alone, but together and with the grace of God.”

As believers, he said, “it is up to us to testify that God does not abandon us, but gives meaning in Christ also to this reality and to our limits, and that with His help we can face the hardest trials.”

He urged everyone to guard against the temptation to fall back into individualism, saying, “Let us be careful, because, as soon as the emergency has passed, it is easy to fall back into this illusion. It is easy to quickly forget that we need others, someone to take care of us, to give us courage.”

Today, as he concluded his talk, he recalled how in these months people were not able to participate in liturgical celebrations but, he said, “they prayed individually or as a family, including through the media, spiritually united and feeling that the Lord’s embrace went beyond the limits of space.” He also recalled how some priests had, “with pastoral zeal and creative solicitude,” helped people “to continue on the path of faith and not to remain alone in the face of pain and fear.”

He assured all those present, and the medical staff and others whom they represent, that “I will continue to pray for you and your communities, and you—please!—do not forget to pray for me, as I need this.”