In Italy, church and state join together to fight coronavirus 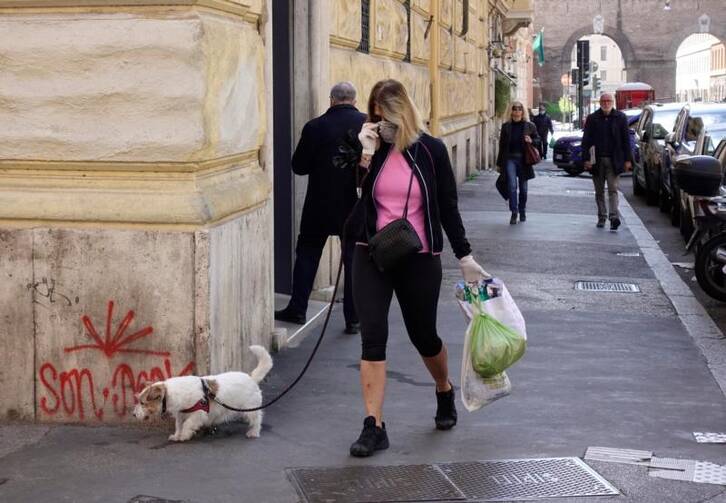 A woman protects her face as she walks with her dog in Rome March 12, 2020. (CNS photo/Paul Haring)

In Italy, both church and state are working together to combat the coronavirus pandemic. With 17,660 infected and 1,266 deaths from the coronavirus in the past three weeks in Italy alone (250 deaths over the past 24 hours), the nation has experienced nothing like the fear triggered by this pandemic—one for which there is as yet no cure and no end in sight.

Some commentators with a knowledge of history suggest that it is necessary to go back to the Spanish flu epidemic of 1918 to find something comparable, or perhaps to the worst days of World War II. Whatever the reference point, it does little to calm the fears and concerns of this nation of 60 million people.

The leader of one of the coalition partners in government and the governor of the Lazio region, Nicola Zingaretti, has been infected, as has the governor of the Piedmont region. So too have judges, journalists and the bishop of Cremona, Antonio Napolioni. But it is the workers in the national health sector—doctors, nurses, other hospital staff and volunteers—who have been the worst hit. Some 12 percent have been infected, Dr. Roberto Torchio, a pulmonologist in Turin, told America.

Some commentators suggest that it is necessary to go back to the Spanish flu epidemic of 1918 to find something comparable, or perhaps to the worst days of World War II.

The Italian government has taken drastic but necessary action, and the prime minister, Giuseppe Conte, has presented these measures in nationally televised broadcasts. The government had to take hard decisions to save lives. Italy has an aging population; the elderly and those with health problems are the most vulnerable to the virus. The young, even if they are not usually infected, risk being carriers to their elders.

The virus struck first in the north, the country’s industrial heartland. It hit Lombardy, the most prosperous region of the country, and then the Piedmont and Veneto regions, areas that have the best health-care structures in the country. But the virus wrought havoc there in less than two weeks, as doctors struggled to cope. In many cases, there were not enough respirators, and sometimes doctors had to make the difficult decision to steer treatment toward younger and more viable victims than older or sicker ones.

With the number of victims rapidly rising, the Italian government feared that if the virus spread to the center and especially the south of the country, strained health structures would collapse entirely and the death toll, already high, would escalate rapidly.

It first imposed lockdown on the worst-hit areas of the north early Sunday morning, March 8, and four days later imposed a total lockdown on the whole country. The lockdown requires everyone to stay at home until April 3. One can only leave one’s home for reasons of necessity, such as to get provisions, to go to work that is considered essential or to visit a doctor or pharmacy. Individuals are required to stay at least one meter’s distance from others and may not shake hands or kiss. Social distancing is a key factor in preventing the spread of the virus.

The Italian government has imposed the total closure of restaurants, bars and all commercial enterprises until March 25.

The government also decreed the closing of schools and universities until April 3. It has imposed the total closure of restaurants, bars and all commercial enterprises until March 25, with the exception of food stores, pharmacies, postal and emergency services, newsstands and the transport system. All are encouraged to wash their hands frequently. Those who have contracted the virus must first contact their local doctor and then remain in quarantine for 14 days, unless they require hospital treatment.

The Italian government has banned people from gathering in groups or in crowds. The Vatican and the Catholic Church in Italy share the government’s concern. For this reason, Pope Francis did not deliver his Sunday Angelus address from the papal study window on the third floor of the Vatican’s Apostolic Palace. Instead, he spoke from the papal library, and the address was transmitted online by the Vatican Media. His traditional weekly audiences this week and next will follow the same procedure because the Vatican does not want to attract crowds to Saint Peter’s Square. The Vatican has cancelled a number of meetings and sought to offer aid to lay workers with families.

To express his closeness to the Italian people, Pope Francis decided to celebrate Mass every morning in the chapel of the Santa Marta guesthouse without a congregation and to have it transmitted online by Vatican Media. He has prayed for the sick and their families, for those who have died and for those with governmental responsibility, that they may be given the wisdom and courage to make the hard choices required. He has prayed also for all health workers: doctors, nurses, other hospital personnel and volunteers. He dedicated one Mass for prisoners and their families, soon after hundreds of detainees revolted and 12 died in 27 prisons across the country, as they feared being infected themselves or being infected by prison guards or staff, and they objected to the government prohibiting visits from family members during the lockdown.

Pope Francis decided to celebrate Mass every morning in the chapel of the Santa Marta guesthouse without a congregation and to have it transmitted online by Vatican Media.

The Italian Bishops’ Conference, led by Cardinal Gualtiero Bassetti, has taken action similar to the state’s: it has cancelled all Masses and other religious services (including weddings and funerals) throughout the country from March 8 to April 3, the latter just two days before Palm Sunday. All pastoral activity involving gatherings of people, such as catechetical classes, are suspended until April 3. It is not clear whether Palm Sunday and Holy Week ceremonies can be held in the traditional way.

On March 12, the cardinal-vicar of Rome, Angelo De Donatis, ordered the total closure of 900 churches and chapels in the diocese of Rome. This surprised and upset people, as many wished to go to church to pray. Church sources told America that Pope Francis was not happy with this total closure. Today, March 13, Cardinal De Donatis issued a modified decree that allowed parish churches to remain open so that the faithful may go there to pray and find solace. He explained that the original decree was “for the common good” and the need to protect people from getting the virus.

Pope Francis has encouraged priests to remain close to their people and care especially for the elderly, the sick and those who have no home or means to care for themselves.

Pope Francis has encouraged priests to remain close to their people and care especially for the elderly, the sick and those who have no home or means to care for themselves. Organizations like Caritas and the Sant’Egidio community are working hard to assist those living alone, the poor and those without a home. Cardinal Konrad Krajewski, the papal almoner, has opened up his titular church to the poor. His is one of the countless efforts across the city to help those on the margins of society at this critical moment, but it came at a moment when all churches were about to be closed in Rome.

The Italian bishops have invited all Catholics to pray the rosary in their homes—“the domestic church”—on the evening of March 19, the feast of St. Joseph, and to put a lighted candle in the window of their home.

The crisis is having a major impact on the Italian economy, and this evening the government is expected to announce an economic package to help families and enterprises. In many ways Italy has been the leader in Europe in responding to this pandemic, but it has also become one of the major centers of the spread of the virus.