Explainer: Can President Trump designate ‘antifa’ as a terrorist group? 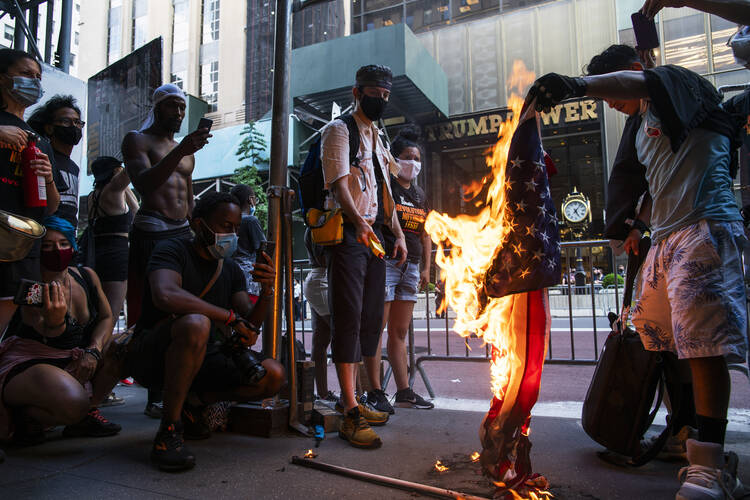 The Sons of Liberty, who orchestrated the Boston Tea Party and looted the houses of government officials, are considered American heroes, but to the British they were a violent mob. Are today’s occupiers of state houses and city spaces—who seek to end stay-at-home orders or achieve police reform—patriots engaged in the democratic exercise of their free speech and lawful assembly rights or domestic terrorists, as some U.S. politicians charge?

As unrest erupted across the nation in recent weeks either in resistance to Covid-19 lockdown orders or in reaction to the police killing of George Floyd in Minneapolis on May 25, President Donald Trump and several Republican members of Congress singled out the so-called antifa movement to be designated as a terrorist organization. In 2017, the mayor of Berkeley, Calif., wanted antifa classified as a gang.

These terms, unlike beauty, are not merely in the eye of the beholder; they have serious legal consequences.

Branding “antifa” (short for “antifascist”) or any domestic association as a terror group is problematic, primarily because the United States “does not officially designate domestic terrorist organizations.” Terrorism is generally defined as the commission of a crime for a political purpose, but statutory language establishes what must be proven to convict a defendant. “Domestic terrorism” is the commission of a criminal act “dangerous to human life” that “appears to be intended to intimidate or coerce.” The federal crime of terrorism is the commission of any one of a laundry list of federal crimes, which range from bioterror to destruction of federal property, that is “calculated to influence or affect the conduct of government by intimidation or coercion, or to retaliate against government conduct.”

Branding “antifa” (short for “antifascist”) or any domestic association as a terror group is problematic, primarily because the United States “does not officially designate domestic terrorist organizations.”

The Animal Enterprise Terrorism Act criminalizes threats of violence and destruction of property targeted toward a particular business, that is, those involving animals, from food production to zoos. Lower courts have rejected claims that it unconstitutionally targets animal rights activists because the law prohibits criminal acts regardless of motive. A business competitor or disgruntled former employee who sabotaged a mink farm, for example, would be equally as guilty as a member of People for the Ethical Treatment of Animals.

F.B.I. regulations define terrorism as “the unlawful use of force and violence against persons or property to intimidate or coerce a government, the civilian population, or any segment thereof, in furtherance of political or social objectives.”

While terrorist acts can be prohibited, the First Amendment protects the right of Americans to assemble and associate for social change. In Holder v. Humanitarian Law Project (2010), the Supreme Court acknowledged that the government may outlaw foreign terrorist organizations, but the justices stated that they did “not suggest that Congress could extend the same prohibition on material support at issue here to domestic organizations.”

Sanctions on advocacy groups incorporated in the United States or with “substantial connections” to the United States are prohibited unless there is substantial evidence that the group is engaged in “coordinated activities” with a foreign terrorist or foreign terrorist organization. Greater protection is given to domestic groups because, as the Supreme Court held in another case, “[f]reedom to engage in association for the advancement of beliefs and ideas is an inseparable aspect of...‘liberty.’”

Courts strictly scrutinize limitations on domestic organizations and uphold only those limitations that are narrowly designed to serve a compelling government interest. Membership in an advocacy group, even one that promotes the violent overthrow of the government, is protected. Criminal acts carried out for political purposes are still criminal acts, but the government may not lawfully stifle the peaceful exchange of ideas or favor one viewpoint over another.

The government is legally bound to walk a thin line between public safety and the protection of civil liberties.

Although the F.B.I. does not keep an official domestic terror list, it does analyze threats and investigate suspected terrorists and terror organizations. Those F.B.I. investigations have in the past included Catholic Worker groups and the Merton Center. The Terrorist Screening Center creates the Terrorist Screening Database and No Fly watchlists based on information gathered by federal and state law enforcement agents.

The government is legally bound to walk a thin line between public safety and the protection of civil liberties. Individuals may not be included on watchlists solely because of “First Amendment-protected activities,” but “individuals who commit crimes in the name of ideologies” can be investigated and prosecuted.

Names are added to watchlists based on “reasonable suspicion...that a person is a known or suspected terrorist.” Reasonable suspicion is the same standard needed for a stop-and-frisk or traffic stop and far less than the probable cause needed to make an arrest.

Names are added without judicial oversight and erroneous listings are problematic, to say the least. Removal from these lists must be requested and the process can be lengthy.

Tanzin v. Tanvir, which will be heard by the Supreme Court in the fall, is a case in point. Muhammad Tanvir alleges that he was on the No Fly list for five years, from 2008 to 2013, solely because he refused to spy on fellow Muslims. His lawsuit claims that the Religious Freedom Restoration Act grants him the right to sue for damages.

Although it is a distinct disadvantage to be placed on a terror watchlist, it can be even more onerous to be classified as a gang member or associate. Federal and state gang and criminal enterprise laws cover organizations whose primary purpose is the commission of crimes.

Although it is a distinct disadvantage to be placed on a terror watchlist, it can be even more onerous to be classified as a gang member or associate.

The government’s interest in preventing and punishing crime and the nonexistent right of people to organize for criminal purposes alleviates, at least in theory, all First Amendment concerns. Enhanced penalties for crimes committed by members of gangs and criminal organizations have been upheld when limited to active and knowing participation, but the current process of identifying criminal organizations and their members is constitutionally precarious.

The National Gang Intelligence Center serves as a clearinghouse for information on gangs and gang associates. All that is needed for a law-enforcement agency to add a name is a belief in “a reasonable possibility that the named subject (individual or organization) is currently involved in a definable criminal activity or enterprise.”

Reliance on hearsay is permissible. This easily leads to First and Fifth Amendment violations. Even infants and young children have been included in CalGang, a gang database used by law enforcement agencies. The Los Angeles Police Department is currently under investigation for falsifying records and racial profiling. It will not be permitted to add names until the investigation is concluded.

In 2011, the F.B.I. listed the Juggalos, fans of the band Insane Clown Posse, describing them as a “loosely-organized hybrid gang.” Individual members were interrogated and detained by local police and lost job or revenue opportunities and feared disciplinary action from the military. But they were unsuccessful in a lawsuit to receive compensation from the F.B.I. because the classification was not a formal action and the alleged constitutional violations were carried out by local, rather than federal, law enforcement officers.

On June 26, President Trump issued an executive order calling for the protection of monuments and suppression of “recent criminal violence.” The president specifically referred to “left-wing extremists” and Marxists, but Attorney General William P. Barr’s implementing memorandum, announcing the creation of a Department of Justice task force on violent anti-government extremists, was more inclusive and circumspect.

Mr. Barr called for the investigation of “those who support the ‘Boogaloo,’ those who self-identify as Antifa, and others.” By including the Boogaloo, an amorphous, but generally right-wing association of anti-government agitators who hope to provoke a civil insurrection, Mr. Barr avoided Mr. Trump’s one-sided political hyperbole and, thus, criticism that the announced task force would be politically biased.

Mr. Trump is free to ignore criminal actions perpetrated by those who may support him and denounce “far-left fascism” and “the radical left,” as he did in public addresses over the Fourth of July weekend, but discrimination in law enforcement based on ideology or political association is antithetical to “our jurisprudence” and guilt by association is also unconstitutional. As the Supreme Court stated in Scales v. United States, (1961), “[g]uilt is personal” and only “one who actively and knowingly works in the ranks of that [criminal] organization, intending to contribute to the success of those specifically illegal activities,” should be prosecuted.