Don’t hide from the sins of St. Louis 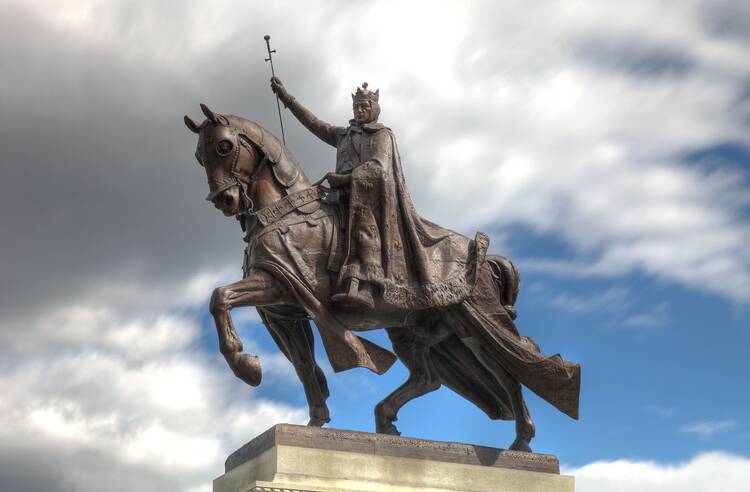 Apotheosis of St. Louis is a statue of King Louis IX of France, namesake of St. Louis, Missouri, located in front of the Saint Louis Art Museum in Forest Park (photo: Wikimedia)

I will pour forth tears until like a river they reach
Unto the tombs of your most noble princes,
Moses and Aaron, on Mount Hor, and I will ask: Is there
A new Torah, that your scrolls may be burned?

This is part of the lament “Sha’ali Serufah Ba’esh,” “O you who are burned in fire,” written by Rabbi Meir of Rothenburg in the aftermath of the burning of thousands of copies of the Talmud at the French royal court in Paris in 1242 and recited to this day by Ashkenazi Jews on the fast day Tisha B’Av. King Louis IX, whom Catholics know as St. Louis, ordered the burning after a rigged “disputation” in which a Jewish convert to Christianity debated a rabbi about whether the Talmud was blasphemous.

This was the first such “disputation” but not the last, always held in the shadow of Christian political power. Talmuds burned across Europe into the early modern era—and Jewish people were at times burned as well. Nor did St. Louis’s persecution of French Jewry end with destroying their sacred books. Under the pretext of combating usury, he threatened to arrest and expel all Jews in his kingdom; he forced Jews to wear a badge on their clothing, in accordance with a decree of the Fourth Lateran Council.

If our first instinct is to defend “the church,” have we really learned the lessons of the sexual abuse crisis?

Tisha B’Av falls at the end of July this year, but the 13th-century lament became painfully relevant a month earlier, when people in St. Louis, Mo., protested a statue of the city’s namesake. Some Jewish leaders called for the statue’s removal. On June 27 crowds chanted, “Take it down!” while Catholics rallied to protect the statue, including praying the rosary at its base. The archdiocese issued a statement arguing, “For Catholics, St. Louis is an example of an imperfect man who strived to live a life modeled after the life of Jesus Christ”—with no mention of the persecution of Jews.

But the archdiocese’s defense of the city’s patron saint, in which persecuting Jews becomes an abstract “imperfection,” does the saint himself a disservice. Louis is in heaven now; he knows that his humiliation and persecution of the Jews was evil. As the archdiocese notes, canonization is not a declaration that every decision a person made was holy. Saints have been complicit and even active participants in social evils of their time. It is especially necessary to confront this truth in its specifics when the evils they succumbed to are still with us, like racism, misogyny, protection of sexual abusers—as with St. John Paul II’s support for the Rev. Marcial Maciel—and hatred of the Jews.

The archdiocese’s defense of the city’s patron saint does the saint himself a disservice.

We are in a season of statue-razing. It began as a revolt against the widespread presence of statues of Confederate generals and other defenders of slavery, but crowds have also protested statues in Boston and Washington, D.C., which show a kneeling slave being freed by Abraham Lincoln. In San Francisco, protesters toppled a statue of Ulysses Grant, who held one man in slavery for two years before freeing him in 1859 and also helped win the Union victory in the Civil War. A San Francisco protester even vandalized a statue of Miguel de Cervantes, whose sole connection to slavery is that he himself was enslaved.

It might be tempting, therefore, to assume that St. Louis is a victim of ignorance. Maybe those chanting around his statue did not know anything about medieval French Jewry until they looked him up on Wikipedia. Maybe St. Louis is like the Roman poet who had the ill luck to share the name of an opponent of Julius Caesar. At Caesar’s funeral, a mob captured the poet; Shakespeare has him defend himself with “I am Cinna the poet!,” but the mob cries out, “Tear him for his bad verses!” Is St. Louis just a convenient target?

Jewish people want to know if Catholics have really rejected our shameful history of persecution.

It doesn’t matter. First of all, even those who think some protesters’ concern for Jews is disingenuous should concede that Rabbi Susan Talve, who has called for the statue’s removal, is sincere. So are those who read reports of the statue controversy in the Jewish Telegraphic Agency, The Times of Israel and other Jewish news sources. Actual Jewish people want to know if Catholics have really rejected our shameful history of persecution, as we promised in “Nostra Aetate.”

Moreover, this is not about protesters’ integrity. It is about ours. If there is one thing a church facing a catastrophic sexual abuse crisis needs, it is willingness to admit the sins of our heroes. If our first instinct is to defend “the church,” not to defend the truth or the victims, have we really learned the lessons of the abuse crisis?

I was raised somewhere between secular and Reform Judaism and converted to Catholicism as a young adult. Many of the medieval “disputations”—show trials of the Jewish religion and community—were led by Jewish converts to Catholicism. That is one way to understand our responsibility as converts: to defend the truth we have come to know. A better way is shown by Jewish converts of the 20th century, like Cardinal Aaron Jean-Marie Lustiger or Raïssa Maritain. These French Jews defended Christ by defending the Jewish people.

Jewish Catholics should have always been advocates for the Jewish people, not weapons against them. Catholics should have always been shields for the vulnerable, not persecutors. The protests in St. Louis give us a chance to speak the whole truth. Willingness to be totally honest here will make our churches safer for everyone who has been harmed by Christians. Failure to be honest will further alienate those who believe Catholics care more about our public image than about truth or justice.