We need to do more than topple (some) statues 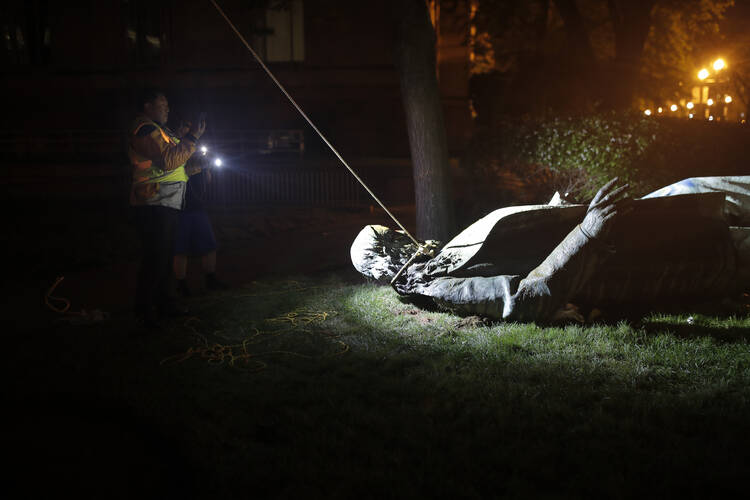 The statue of a Confederate general, Albert Pike, after it was toppled by protesters and set on fire in Washington, D.C., on  June 20. (AP Photo/Maya Alleruzzo)

Toppling the statue of a historical personage is a political act. So is building one. Removing monuments is not more violent than it was to install them in the first place. For those who wish to understand the present moment, the salient point is not “law and order” or “urban decorum.” The problem is what we want to do with our past.

Some statues deserve to be toppled and removed because their symbolic value has been undermined by a political and historiographical rethinking of a tragic past. In Italy, my own country of origin, many monuments of the Fascist regime were removed long before it was possible to teach about the 20th-century history of authoritarian regimes. There are other examples as well. In post-communist Eastern Europe, for example, statues from the Soviet era were often moved to museums and parks to become part of a resignification of political art.

But our problem is different. The current toppling of statues in the Western Hemisphere (in the United States, the United Kingdom and parts of Western Europe) is not simply about a change of political regime but about a crisis of civilization. European culture and Christianity have been put on the stand. Of course they are not innocent: Colonialism, slavery, genocide, cultural oppression and white supremacy have made of lot of victims. Are there any cultures or religions that are totally innocent?

Colonialism, slavery, genocide, cultural oppression and white supremacy have made of lot of victims. Are there any cultures or religions that are totally innocent?

Walter Benjamin, the German Jewish philosopher who died in 1940 while fleeing the Nazis, wrote that “there is no document of civilization which is not at the same time a document of barbarism.” I interpret this to mean that destroying statues is not necessarily the most constructive way to elaborate a tragic past and build a different future. We are responsible for the past, and destroying statues will not solve the problem of that responsibility. It could also lead to the assumption that those of us destroying monuments of the past are “on the right side of history”—something that borders on complacency. Perhaps the language of “being on the right side” works in politics, but intellectually and morally it borders on self-delusion.

What we need is a struggle for justice and the redemption of victims through action that is also political. But this is impossible without a sense of history. Destroying statues makes history look like drama. It should be seen instead as tragedy, where “tragic” means seeing ourselves not only in solidarity with the victims, but also as part of that past.

Perhaps the language of “being on the right side” works in politics, but intellectually and morally it borders on self-delusion.

What is needed, especially from those who have a professional vocation to do this, is a discernment of spirits. Destroying is quicker than resignifying the monuments of the past. Sometimes resignification is not possible and would lead instead to more violence and oppression. In other cases, iconoclasm against works of art is an obstacle against the possibility to comprehend the past: Works of art are living things, never closed or finished, as they are subject to new interpretations and scholarship.

Should Confederate statues in public places be destroyed?
Our readers

History cannot be undone, but is not done either. As Terry Eagleton has pointed out in his book Hope Without Optimism, we are responsible for the past as well as for the present and future: “The meaning of past events lies ultimately in the guardianship of the present.” The point of view of the victims must be the starting point: “The dead cannot be resurrected; but there is a tragic form of hope whereby they can be invested with new meaning, interpreted otherwise, woven into a narrative which they themselves could not have foretold.”

This guardianship of the present cannot limit itself to a political narrative, but rather must go deeper into a theological view of history: “the possibility of a shared world across gulfs of difference,” in the words of the theologian Rowan Williams. What is not apparent today is the ability to see ourselves as part of history—not just in politics, but also in the contemporary Catholic intellectual world, where historical disciplines have become totally marginalized.

Destroying is quicker than resignifying the monuments of the past.

This is not just the plea of a historian but also an overall concern about this loss of sense of history. Let me offer two examples. The first deals with the problem of the theological tradition: Are we going to cancel all the Fathers of the Church who held anti-Jewish or sexist views from the great source collections Patrologia Graeca and Patrologia Latina? Or, rather, are we going to read them more contextually in order to learn how the comprehension of the Gospel grows in history?

The second example: The new phase of the sexual abuse crisis (after 2018) has started a new round of research. I think Catholics are still in search of a hermeneutic of history necessary to understand the sexual abuse crisis in a way that is helpful to build and correct its theological and magisterial tradition. The risk is that the church will limit itself to toppling—literally or figuratively—some of the monuments of its past, including doctrines, institutions and church leaders.

The Germans, of course, have a word for this: vergangenheitsbewältigung, or “working through the past.” Removing statues can be, at best, only part of a much longer and more difficult path ahead. Toppled monuments can create obstacles, or they can be foundation stones.