Who is St. Junipero Serra and why are California protesters toppling his statues? 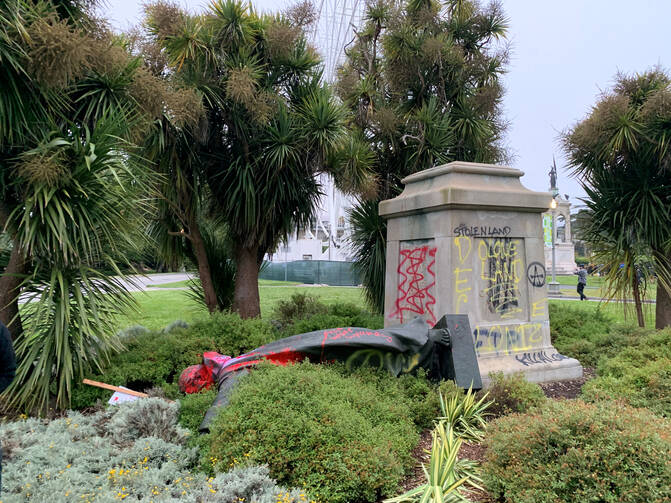 A vandalized statue of St. Junipero Serra in San Francisco is seen June 19, 2020. The Spanish Franciscan founded several missions in what is now California. (CNS photo/David Zandman via Reuters)

(RNS) — As protesters on Friday toppled a statue of Father Junipero Serra in San Francisco’s Golden Gate Park, leaders of another California city had already announced plans to remove a statue of the Catholic saint near their city hall.

And by Saturday afternoon another Serra statue was toppled at Placita Olvera in downtown Los Angeles.

"Pull it! Pull it! This is for our ancestors," a person shouted.

In a video of the San Francisco toppling, people can be heard cheering as the statue of the 18th-century Franciscan priest holding a cross fell to the ground. People strike and kick the statue in the video, and it’s clear the statue has also been tagged and splashed with what appears to be red paint.

Meanwhile, in the city of Ventura, the mayor, a pastor and a tribal leader announced in a letter that a statue of Serra near Ventura City Hall would be removed. This announcement was made after an online petition demanded the statue be taken down.

"Serra is not the historical hero people thought when this landmark statue to him was erected, one of many throughout California, as a historical emblem, he is toxic and should be removed,” the petition reads.

In the wake of Black Lives Matter demonstrations, statues honoring Christopher Columbus and Confederate leaders have also been defaced and toppled.

In light of these nationwide events, Californians are once again re-evaluating their statues of Serra — who led the Catholic Church's missionary efforts among Native Americans on the West Coast.

Serra in 2015 was canonized as a saint by Pope Francis during a trip to the U.S.

While Serra is credited with spreading the Catholic faith across what is now California, critics say Serra was part of an imperial conquest that beat and enslaved Native Americans.

Serra, who was born in Spain, came to the Americas in 1749, and in 1769 he founded the first of what would become 21 missions along the California coast.

Serra’s Sainthood: A cause for healing or controversy?
Jeffrey M. Burns

Native Americans brought into the mission to be evangelized were not allowed to leave the grounds. Many labored for no pay. There is evidence of beatings, imprisonment and other abuse at the hands of the missionaries.

Serra defenders say it's unfair to judge him by 21st-century standards. They say he frequently pleaded for more merciful treatment for the Native Americans under their control.

Months before Serra was canonized, Cliff Trafzer, director of UC Riverside’s California Center for Native Nations and a history professor, told the Press-Enterprise in Riverside that the church continued to ignore the Indigenous American viewpoint on Serra.

“Father Serra represents the invasion of California and the taking of native lands," he told the newspaper.

Meanwhile, Los Angeles Archbishop José Gómez, in the Los Angeles Times, said Serra was an inspiration in his ministry.

"He preached God’s compassion, fought for the dignity of women and the rights of America’s native peoples, and he was probably the first person in the Americas to make a moral case against capital punishment," Gómez said.

The Catholic News Agency detailed how Serra asked Spanish authorities to spare the lives of the California natives who had attacked a San Diego mission.

In Ventura, the letter announcing the removal of the Serra statue was signed by Mayor Matt LaVere; Father Tom Elewaut, pastor at the San Buenaventura Mission Church; and Julie Tumamait Stenslie, tribal chair of Barbareño/Ventureño Band of Mission Indians (Chumash).

“We have listened and we have heard the calls from those in the community and believe the time has come for the statue to be taken down and moved to a more appropriate non-public location," the letter reads.

"We all believe that the removal of the statue should be accomplished without force, without anger, and through a collaborative, peaceful process."