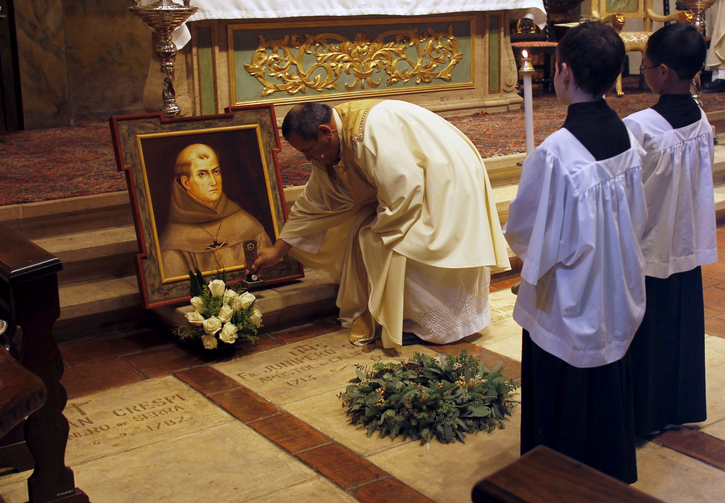 Father Miguel Rodriguez sets a relic on the tomb of St. Junipero Serra during Mass at the Carmel Mission Basilica in Carmel, Calif., Sept. 23, 2016, the day the Spanish missionary and founder of the California mission system was cannonized by Pope Francis in Washington. (CNS photo/Michael Fiala, Reuters)

LOS ANGELES (RNS) — The California Catholic Conference of Bishops is denouncing the toppling of Junipero Serra statues that protesters took down in San Francisco and Los Angeles over the weekend.

"If this process is to be truly effective as a remedy for racism, it must discern carefully the entire contribution that the historical figure in question made to American life, especially in advancing the rights of marginalized peoples," the California Catholic Conference said in a statement.

"In calling for the removal of images of Saint Junipero Serra from public display in California, and in tearing down his statue in San Francisco and in Los Angeles, protesters have failed that test," the statement continued.

The California Catholic Conference, which is described as the "official voice of the Catholic community in California's public policy arena," issued the response Monday afternoon, June 22.

In a video of the San Francisco toppling, people can be heard cheering as the statue of the 18th-century Franciscan priest holding a cross fell to the ground. People strike and kick the statue in the video, and it's clear the statue was tagged and splashed with what appears to be red paint.

"Pull it! Pull it! This is for our ancestors," one person was heard shouting.

Californians are once again reevaluating their statues of Serra as monuments honoring Confederate leaders have been defaced and toppled in the wake of protests denouncing institutional racism and police brutality and in support of Black Lives Matter.

In the city of Ventura, the mayor, a pastor and an Indigenous leader have recently pledged  to remove the Serra statue near Ventura City Hall. And on Monday, the Diocese of Monterey  said  it removed a Serra statue from San Luis Obispo Mission to "protect it from vandalism."

While Serra is credited with spreading the Catholic faith across what is now California, critics say he was part of an imperial conquest that beat and enslaved Native Americans.

Serra, who was born in Spain, was canonized as a saint by Pope Francis amid Native American protests during a 2015 trip to the U.S.

Serra came to the Americas in 1749, and in 1769 he founded the first of what would become 21 missions along the California coast.

Native Americans brought into the mission to be evangelized were not allowed to leave the grounds. Many labored for no pay. There is evidence of beatings, imprisonment and other abuse at the hands of the missionaries.

"Indians were expected to give up most of the important aspects of their culture in return for what the missionaries promised them was salvation," Serra biographer and University of Riverside history professor Steven W. Hackel told the Smithsonian Magazine.

Serra defenders say he pleaded for more merciful treatment for the Native Americans under the missionaries' control. The Catholic News Agency detailed how Serra asked Spanish authorities to spare the lives of the California natives who had attacked a San Diego mission.

Los Angeles Archbishop José Gómez has referred to Serra as an inspiration and has staunchly defended the priest.

"St. Junípero has long been misunderstood and, in my opinion, wrongly used as a symbol for the tragic abuses committed against California's first peoples," Gómez wrote in Angelus, the archdiocese news site.

He also noted that the archdiocese is the home of many native peoples, including the Chumash, the Tataviam, the Tongva, and the Acjachemen.

Others, however, believe Serra should have never been canonized as a saint and say they only learned one side of his story growing up.

"In California schools, we only learn about him as a civilizing force," tweeted Joe Rivano Barros, who documented the toppling in San Francisco.

Rivano Barros told Religion News Service that California "has too many statues of colonizers and others who presided over genocide."

"Native Americans have been calling for these monuments to be replaced for years and years," he said.

Serra’s Sainthood: A cause for healing or controversy?
Jeffrey M. Burns

According to the Los Angeles Times, organizers of the action in LA said through a statement that: "It is time for reconciliation and with that, it is time for the WHOLE truth, all sides of the history need to be told."

The California Catholic Conference, in its statement, included words from San Francisco Archbishop Salvatore Cordileone, who said Serra made "heroic sacrifices to protect the indigenous people of California from their Spanish conquerors, especially the soldiers."

Cordileone mentioned an instance when Serra walked to Mexico City to "obtain special faculties of governance from the Viceroy of Spain in order to discipline the military who were abusing the Indians."

The California Catholic Conference said Serra was "a man ahead of his times who made great sacrifices to defend and serve the indigenous population."

"And if that is not enough to legitimate a public statue in the state that he did so much to create, then virtually every historical figure from our nation's past will have to be removed for their failings measured in the light of today's standards."

Kimberly Winston and David Gibson contributed to this report.

Provide feedback on this article
Join the conversation: Login or create an account
Before you can comment, you need to update your profile to include your first and last name, as required in our comments policy. Then reload this page and you'll be set up for commenting. Update your profile
Advertisement
More: US Church / US Politics / Saints