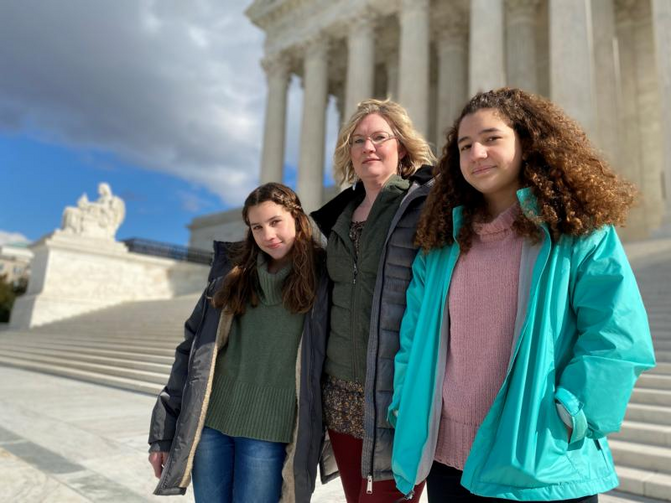 Montana resident Kendra Espinoza, a key plaintiff in a religious rights case involving school choice, poses for a photo in front of the U.S. Supreme Court with her daughters Sarah and Naomi Jan. 19, 2020. The court ruled June 30 that religious schools can not be excluded from Montana's school tax-credit program. (CNS photo/Will Dunham, Reuters)

WASHINGTON (CNS) -- The consensus from religious liberty advocates following the June 30 Supreme Court ruling on public funds and sectarian schools is the Blaine amendments, a hated remnant of 19th-century anti-Catholic bigotry, are finally gone for good.

"The court should be applauded ... for stating clearly that laws like Montana's that treat people of faith like second-class citizens have no place under our Constitution," Carrie Severino, president of the advocacy group Judicial Crisis Network, said in a statement posted on Twitter. "The justices have gone a long way toward blotting out the stain of religious bigotry that has permeated so much of the law in this area."

The case, Espinoza v. Montana Department of Revenue, was brought by three mothers who had been sending their children to Stillwater Christian School in Kalispell with the help of a state scholarship program created in 2015. The Montana Department of Revenue issued an administrative rule a few months after the program started, saying the tax credit donations could only go toward nonreligious, private schools.

In its 5-4 ruling the Supreme Court said this exclusion violated the U.S. Constitution.

Writing for the majority, Chief Justice of the United States John Roberts cited the Blaine amendments, a ban on government aid to sectarian causes or religious institutions that came out of an era in which official government hostility to Catholics was at its peak. Montana ratified a Blaine Amendment to its state constitution in 1889 and again in 1972. Thirty-six other states also have them.

"Many of the no-aid provisions belong to a more checkered tradition shared with the Blaine Amendment of the 1870s," Roberts observed. "That proposal -- which Congress nearly passed -- would have added to the federal Constitution a provision similar to the state no-aid provisions, prohibiting states from aiding 'sectarian' schools."

Roberts called the Blaine amendments "born of bigotry," adding, "The no-aid provisions of the 19th century hardly evince a tradition that should inform our understanding of the Free Exercise Clause."

Kari Beckman, executive director of Regina Caeli Academy, a Roswell, Georgia-based program that combines tutoring with home schooling, told Catholic News Service that she hopes more future court rulings will be based on that clause of the First Amendment, including any upcoming appeals based on a new Supreme Court ruling expanding the definition of sex in the anti-discrimination provisions of Title VII of the Civil Rights Act of 1964.

"I'm hoping as these cases come up, (Roberts) will ... see more clearly now," she added.

Title VII is a federal law that protects employees against discrimination based on certain specified characteristics: race, color, national origin, sex and religion. In a 6-3 vote June 15, the Supreme Court expanded the definition of "sex" to include gay and transgendered people, saying they also are protected employees. Roberts sided with the majority in that opinion.

"The end of government discrimination against religious schools is a victory for all parents and students who choose to attend these schools, but especially for the many low-income students who are educated by them," Susan Poyo, director of education at the Franciscan University of Steubenville, Ohio, said in a statement.

The decision "is a welcome victory for religious freedom and countless American families," said Andrea Picciotti-Bayer, legal adviser for The Catholic Association, which had filed a "friend of the court" brief in the case. "This decision blots out a great stain on our history."

In another statement, Diana Verm, a senior counsel at Becket, a Washington-based nonprofit religious liberty law firm, cheered. "It was high time for the Blaine amendments to bite the dust," she said. " Relying on century-old state laws designed to target Catholics to exclude all people of faith was legally, constitutionally, and morally wrong."

The mothers were represented by the Institute for Justice, a nonprofit legal advocacy group based in Virginia. The group's senior attorney, Erica Smith, called the decision "a landmark case in education that will allow states across the country to enact educational choice programs that give parents maximum educational options."

John Bursch, senior counsel with Alliance Defending Freedom, called the ruling "consistent with the court's 2017 decision in Trinity Lutheran Church of Columbia v. Comer, which unequivocally reaffirmed that states can't impose 'special disabilities on the basis of religious views or religious status.' The court was right to not allow the dead hand of 19th century anti-Catholic bigotry ... to put a stranglehold on educational resources desperately needed by parents and their children."

Michigan Catholic Conference president and CEO Paul A. Long, who has long argued against that state's Blaine Amendment as a form of state-sanctioned religious discrimination, praised the Supreme Court’s decision.

"We're pleased with the decision of the U.S. Supreme Court and believe it is an important step toward bringing an end to 50 years of systemic and state-recognized discrimination and injustice against Michigan’s non-public schools, students and families," Long told the Detroit Catholic, media outlet of the Archdiocese of Detroit.

"While the decision will require a full review for its impact in Michigan, it is clear that the court has handed down a path forward toward educational freedom and opportunity for all," he said.

In 1970, the Michigan Constitution was amended to prohibit state aid to nonpublic schools and is considered among the most prohibitive Blaine amendments in the country.

Provide feedback on this article
Join the conversation: Login or create an account
Before you can comment, you need to update your profile to include your first and last name, as required in our comments policy. Then reload this page and you'll be set up for commenting. Update your profile
Advertisement
More: Supreme Court / Religious Freedom / Education / Catholic Education