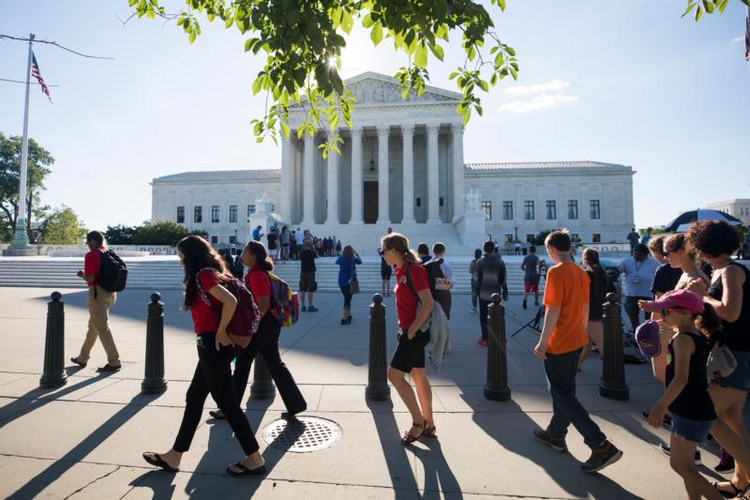 Religious liberty won on June 26 when the U.S. Supreme Court ruled that states cannot discriminate against religious institutions in the distribution of state funds for nonreligious activities.

Archbishop William E. Lori of Baltimore, chairman of the U.S. bishops' Committee for Religious Liberty, said the decision was a "landmark victory for religious freedom."

"The Supreme Court rightly recognized that people of faith should not be discriminated against when it comes to government programs that should be made available to all," Archbishop Lori said in a statement.

The Supreme Court reversed what the 8th U.S. Circuit Court of Appeals decided back in 2015, when it sided with the state of Missouri.

The case involves Trinity Lutheran Church's preschool, which, after applying for a Missouri state grant that provided schools with reimbursements for resurfacing playgrounds with recycled tire pieces, was denied the grant solely on the grounds that the property was owned by a church.

"The court held that Missouri's exclusion of Trinity Lutheran from the grant making process at stake here violated the Free Exercise Clause," said Hillary Byrnes, an assistant general counsel at the U.S. Conference of Catholic Bishops.

"So what the court's decision does is start to chip away at some of the Blaine amendments that are on the books now in almost 40 states," she told Catholic News Service in an interview.

"It doesn't completely eliminate them, but it says that states cannot interpret their amendments in such a way that they would be discriminating against a church run institution or religious organization," added Byrnes, who is lead staff for the bishops' Committee for Religious Liberty.

"The Missouri Constitution's Blaine amendment should act as a shield against the establishment of an official state religion," said Mike Hoey, executive director of the Missouri Catholic Conference, in a statement applauding the U.S. Supreme Court's decision.

The amendment "should not act as a bar to a religious organization receiving a nonsectarian grant, like the offered through the scrap tire program, that do nothing to establish a religion," he said.

According to Byrnes, the Trinity Lutheran case did not attack Blaine amendments directly.

"My hope is that we have a case that squares up that issue, looks at the history of the Blaine amendments and says that these provisions were passed with a really discriminatory intent, and so they shouldn't be relied on at all by states in a pluralistic society that we have nowadays," Byrnes said.

Though the decision's practical implications for Catholic schools remain unclear, the National Catholic Educational Association issued a statement on June 27 applauding the court's call. Dr. Tom Burnford, president and C.E.O. of the N.C.E.A, said, “It is the hope of N.C.E.A. that this decision will support efforts to repeal similar Blaine Amendments, while allowing all states to provide parents with more choices in selecting the best options for educating their children.”

"This is an extremely important case just because of the way that the law has been going under the Free Exercise Clause and sometimes being subsumed by the Establishment Clause. ... They're certainly both there, but they're both there to protect religious freedom and not discriminate against religious freedom or discriminate against the people of faith or religious organizations," said David Cortman, vice president of U.S. litigation at Alliance for Defending Freedom, in a news conference.

The Alliance for Defending Freedom is an advocacy group dedicated to fighting and winning cases for religious liberty, among many things. The organization argued on behalf of Trinity Lutheran in court.

"We didn't ask for special treatment, we asked for equal treatment for people of faith," said Michael Farris, who is the alliance's president, CEO and general counsel, in a statement. "And the court agreed that the government cannot discriminate against people of faith by treating them unequally."

Andrea Picciotti-Bayer, a legal adviser with the Catholic Association, said in a statement that such a blow against state Blaine amendments was long overdue.

"America's beacon of liberty shines brighter today and our communities will be stronger for it," Picciotti-Bayer said in a statement. "Like the Missouri law at issue in Trinity Lutheran, 36 other states have Blaine amendments that deny state funds to groups simply because their good work is done as part of their faith community.

"Americans of all creeds live our faith not just where we worship but by serving our neighbors at soup kitchens, rehab programs, crisis pregnancy centers and even—like the petitioners in Trinity Lutheran—preschools with outdoor playgrounds. Today's decision recognizes the important contributions made in America by faith-based groups."

U.S. Sen. Roy Blunt, R-Missouri, in a statement commended the court's decision, which he said "affirms that the government cannot categorically deny benefits to Trinity Lutheran, or any religious organization, simply because they are religious."

This victory allows for the doors to remain open between religious institutions and state governments, according to Byrnes.

"I think this is a really great victory for religious liberty," Byrnes told CNS. "If the court had gone another way, we could have seen lots of challenges to programs that we have, partnerships with, between Catholic institutions and state and local governments, even the federal government.

"We partner with the government in order to provide services to people that sometimes the government cannot do as well on its own, as faith based institutions can do," she said. "Thankfully, this decision went the right way and it accounts for that work to continue and not be threatened by further lawsuits that claim the government shouldn't be funding religious organizations."

1
Bishop McElroy: Abortion is a pre-eminent issue for Catholics. But not the only one.
Sebastian Gomes
2
Can a pro-life Catholic vote for Joe Biden? Vatican II has an answer.
Kathleen Bonnette
3
I was educated by abusive priests. What should I do with the gifts they gave me?
Francis X. Sullivan
4
Jeannie Gaffigan: My loved ones told me ‘real’ Catholics vote for Trump. Here’s my response.
Jeannie Gaffigan
5
Do Catholics have to vote for Trump? Three points to consider.
John F. Crosby