Serra’s Sainthood: A cause for healing or controversy? 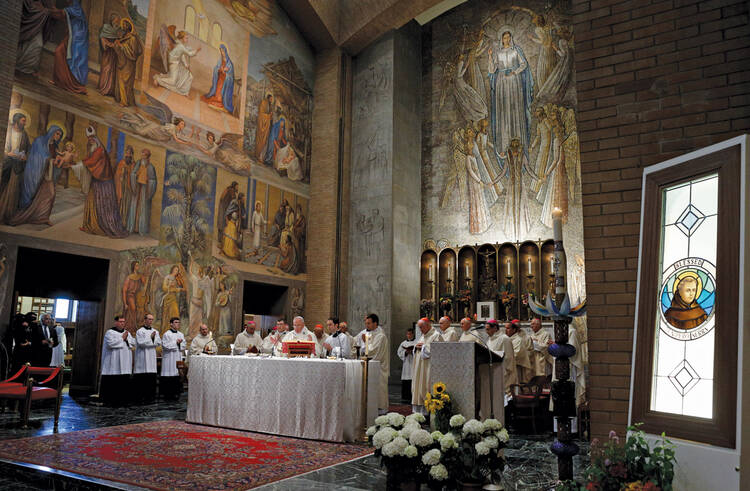 Pope Francis’ announcement that he will canonize the Franciscan missionary Junípero Serra, the apostle to California, in September has reignited long-standing resistance to the idea from a number of Native American groups. Some make extreme accusations: One protest group described in the Associated Press chanted, “Serra was no saint! Serra was the devil!” and held signs claiming Serra was responsible for genocide. Another accused Serra of intentionally spreading smallpox among the natives to destroy them. “Serra set up forced labor camps, death camps” was an allegation reported in The Los Angeles Times. “Women and children were raped....”

These wild and unfounded criticisms accompany more reasoned but no less critical responses, like that of Edward Castillo, the director of Native American studies at Sonoma State University in California. A Native American himself, he opposes the canonization because of the impact the missions had on Native American peoples and cultures. “Missions brought death, starvation and disease to California tribal people,” he said at a symposium on Serra and California’s mission history at the University of California, Riverside in March. The missions “created a legacy of poverty and invisibility,” he said, adding that “tribal people still suffer the impact of missionization.”

In Search of Serra

At the heart of the arguments used by most opponents of Serra’s canonization is the belief that the Franciscan was responsible for the decimation of native populations and the destruction of their cultures. How can Serra be named a saint in light of the history of native Californians?

Defenders of Serra counter that he was “a man of his time” and should not be judged by 21st-century standards. Ruben Mendoza, a religious studies scholar at California State University, Monterey Bay, suggests that many critics of Serra “conflate the American period [after 1846] with that of the missions.” As the historian James Rawls pointed out years ago, abundant evidence exists of the intentional destruction of native Californians during that post-mission era, replete with “hunting parties” that massacred Indians, and more “civilized” discussions of whether it would be better to “remove” or “exterminate” the native Californians. Pope Francis has even weighed in on the controversy, praising Serra’s missionary zeal and arguing that Serra “defended the indigenous peoples against abuses by the colonizers.”

What seems to be missing amid the debate and hard feelings it has provoked is Serra the man, as the scholars Rose Marie Beebe and Robert Senkewicz point out in their excellent book Junípero Serra: California, Indians, and the Transformation of a Missionary. Father Serra, born in Mallorca, Spain, in 1713, entered the Franciscan Order and became noted as a holy preacher and learned professor of philosophy. He could have lived a comfortable and respected life in Mallorca, but at the advanced age of 36, he decided to set out to the so-called New World to preach the Gospel to the native peoples. From 1749 to 1767 Serra worked in Central Mexico with natives who had already been evangelized. It was not until 1769 that he finally arrived in California. He was 56 years old.

Three vignettes from Ms. Beebe and Mr. Senkewicz highlight Father Serra at his best, a loving Franciscan determined to minister to and express Christian love for the native peoples. He would have been considered old when he made his first contact with uncatechized native people. On his way to present-day California (then referred to as Alta California), Serra met a tribal group in northern Baja California. His writing about the encounter reveals the deep emotion he felt. He called it “a day of great consolation.”

As 12 “gentiles” (the term used for unbaptized natives) approached, Father Serra was overwhelmed. “I praised God, kissed the ground, and gave thanks to Our Lord for granting me the opportunity to be among the gentiles in their land, after longing for this for so many years.” Though amazed at their lack of dress, Serra blessed each one, “I placed my hands on the head of each gentile, one at a time, as a sign of affection.” Serra promised friendship and protection to the native Californians and expected to reap a rich bounty of souls.

Things did not always go as well as Serra hoped. In December 1775, the native tribes in the San Diego area, the Kumeyaay, revolted, destroying the mission and killing the mission padre Luis Jayme. Serra’s response is instructive as evidence of his vision of mission. Serra asked the military governor that the leaders of the revolt be forgiven and counseled against a “military campaign.”

He told the governor, “Let the murderer live so he can be saved, which is the purpose for our coming here, and the reason for forgiving him.” Serra suggested that after “moderate punishment,” he should let the revolt’s leader know that “he is being pardoned in accordance with our law, which orders us to forgive offenses and prepare him not for his death, but for eternal life.”

That is the essence of Father Serra’s project, of what drove and excited him. He was bringing the California peoples, whom he loved, the greatest gift imaginable: the gift of eternal life. To him all earthly troubles and travails paled in comparison.

One final vignette, used by Mr. Senkewicz and Ms. Beebe to introduce their biography, depicts a most extraordinary encounter. In 1776, Serra and a small group of Spanish were struggling in the rain along the Santa Barbara Channel, sinking into the ground as they walked. To their dismay, a group of Chumash Indians, one of the largest and most powerful tribes in California, appeared on the horizon. Previous encounters with the Chumash had been hostile and Serra and his contingent expected the worst.

Instead, a remarkable thing happened. The Chumash approached, took the 63-year-old Serra by the arms, lifted him up and carried him some distance to solid ground. The amazed Serra later wrote, “I [do not] think I will ever be able to repay them as I would hope to do.” Over a year later he was still pondering the encounter: “And for me, this served to deepen the compassion I have felt for them for quite some time.”

The encounter on the Santa Barbara beach suggests all sorts of possibilities. Here two alien people encountered one another on the most basic level—through an act of mercy and assistance. What would the result have been had this been the model of all such encounters?

But history is never that simple. The enterprise begun by Serra would culminate in a demographic and cultural tragedy. Though it was never his intention to cause harm to the native people, we must acknowledge the unintended consequences of Spanish evangelization and colonization.

The tragedy was not lost on the Franciscans either. One of Serra’s successors as mission president, Mariano Payeras, O.F.M., after serving as a missionary in California for 23 years, penned this poignant reflection in 1820: “Where we expected a beautiful and flourishing church and some beautiful towns...we find ourselves with missions, or rather with a people miserable and sick, with rapid depopulation of the rancherías,” as the native communities were called, “which with profound horror fills the cemeteries.”

It is not too much of a stretch to think Serra would have thought the same thing had he lived to see what Father Payeras saw. Surely Father Serra’s deep love for the native peoples would have made him feel the same regret.

So as we approach the canonization of Junípero Serra, let us look beyond the din of charge and countercharge. Let us look for healing. Let us lament what went wrong and to reach out with a healing touch to the many native Californians who still feel burdened by the legacy of the missions. Let us acknowledge the very real pain felt by many Native Americans, and look for ways to move beyond the current controversy.

What we celebrate with the canonization of Junípero Serra is not a failed missionary policy nor the imperial colonization and subjugation of a land and people—and certainly not the death of so many indigenous people. What we celebrate is a man burning with missionary zeal who loved and engaged the native peoples of California. We celebrate the contemporary native Californian Catholic community, who bear witness to this complex history and are, perhaps, Serra’s greatest legacy.

At the same time, let us celebrate the heroic efforts of California’s native peoples, who were not merely docile victims but a strong, proud people who were forced to negotiate a complex and at times bewildering new environment. Let us celebrate that moment on the beach where two peoples met to share that most basic of human gifts—kindness.

Jeffrey M. Burns is the director of the Frances G. Harpst Center for Catholic Thought and Culture at the University of San Diego, Calif.

Hi Joe. You can always find a description and credit for the cover photo on the Table of Contents page. In this case: First holy Communion during Mass at San Carlos Borromeo de Carmelo Mission in Carmel, Calif., on May 17. A portrait of Blessed Junipero Serra sits above his tomb before the altar. (CNS photo/Nancy Wiechec)

Richard Booth
7 years 3 months ago
I agree with the comments of Mark, the former friar. The clerics, in their large numbers and clad in ornamental garb, will be there en masse, following everyone else because that's what the expectation is. Further, as I said in a different response to another article, Serra was a man of his own cultural times and was apparently intense about conversion at some significant cost to the nativist populations. The question is: Do we view what he did as a wonderful gift to the Church or, on the other hand, as the destruction of a people? Whoever said anthropology should be part of a seminarian's training, is, in my view, correct. In fact, I could recommend a few more courses that might allow clerics to view life through a broader lens. That might lead to a better understanding of the people they say they serve.