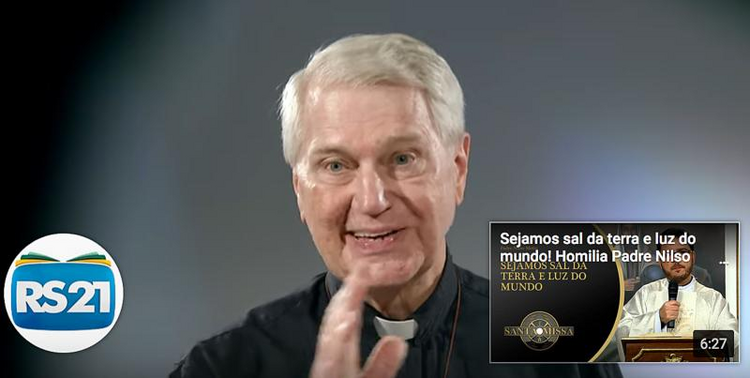 SAO PAULO (CNS) -- The Brazilian bishops have criticized some Catholic TV stations' offer of support to the government in exchange for public funds and advertising revenues.

"The Catholic Church does not make bargains. It establishes institutional relations with public agents and the constituted powers, guided by the values of the Gospel and democratic, republican, ethical and moral values. We do not approve initiatives like this, which hinder the necessary unity for the church, in the fulfillment of its evangelizing mission," said the June 6 statement by the Brazilian bishops' conference.

The offer was made during a videoconference between Brazilian President Jair Bolsonaro and members of some Catholic TV stations.

The bishops emphasized that none of the broadcasters at the conference represent the Catholic Church, nor speak on its behalf.

At the mid-April videoconference, Father Reginaldo Manzotti, televangelist, told Bolsonaro: "We want to help build this Brazil. And, more than ever, you (Bolsonaro) know how important this (support) is when you have negative media. We want to be together."

Another participant was U.S.-born Jesuit Father Edward Dougherty, founder of Rede Seculo 21. The channel, however, denied that Father Dougherty asked for government aid.

In his speech, said a statement from Rede Seculo 21, Father Dougherty emphasized the possibility of exchanges between the U.S. and the South American country in the areas of environment and long-distance education. "At no time did Father Eduardo(as Father Dougherty is called in Brazil) propose an exchange of favors to the government or ask for support in exchange for funds," the statement said.

Other religious, however, were more direct.

"In order for us to grow, we need to have more investments," said Joao Monteiro de Barros Neto, owner of Rede Vida. Barros Neto was present at the virtual meeting and later told the newspaper O Estado de Sao Paulo that his network registered an 85% decline in advertising revenue from the federal government since Bolsonaro took office.

During the 2018 presidential elections, one of Bolsonaro's largest support groups were evangelicals.

"Our reality is very difficult and challenging; we work with small donations. We are in need of greater support from the government so that we can continue to communicate the good news, bringing to the knowledge of the Catholic population, the vast majority of this country, what good the government may be doing for our people," Redemptorist Father Welington Silva of TV Pai Eterno said on the videoconference.

According to the TV channel, however: "Father Silva participated as a journalist and communicator. He was not representing the station. TV Pai Eterna did not receive an invitation or send a representative to the videoconference," said a statement.

The station also reiterated it was "in line" with the philosophies of the bishops' conference.

"TV Pai Eterno has never made and does not make bargains," it said.

Lise Alves - Catholic News Service
Provide feedback on this article
Join the conversation: Login or create an account
Before you can comment, you need to update your profile to include your first and last name, as required in our comments policy. Then reload this page and you'll be set up for commenting. Update your profile