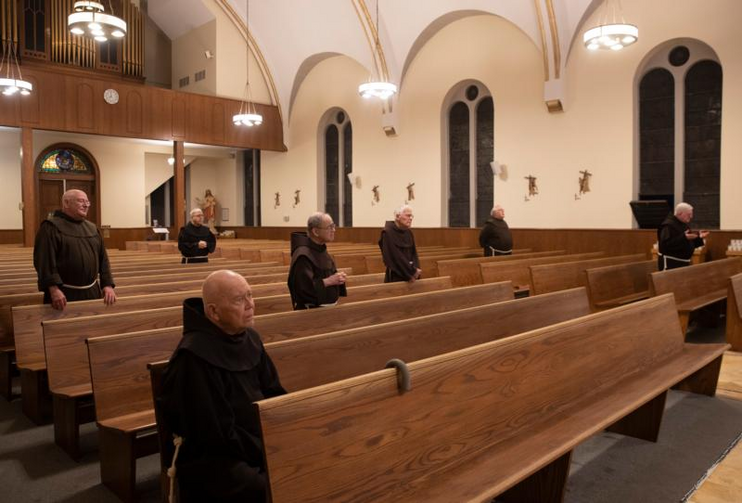 WASHINGTON (CNS) -- A divided Supreme Court May 29 chose not to intervene in an emergency appeal by a church in Southern California to lift COVID-19 restrictions that limit congregation sizes.

The justices responded just before midnight with a 5-4 vote in the case filed May 26 by South Bay United Pentecostal Church in Chula Vista, California, near San Diego. The church had argued that California Gov. Gavin Newsom's reopening orders violated the Constitution because they placed fewer restrictions on some secular businesses than they did on houses of worship.

The church wanted to hold its regular services Sunday, May 31, on Pentecost. Currently, the state's restrictions limit church attendance to 100 attendees or 25% of the church capacity, whichever is lower.

"The precise question of when restrictions on particular social activities should be lifted during the pandemic is a dynamic and fact-intensive matter subject to reasonable disagreement," wrote Chief Justice John Roberts in an opinion concurring with the unsigned ruling.

In his five-paragraph opinion, Roberts stressed these guidelines appear "consistent with the free exercise clause of the First Amendment."

He also said the state's order "exempts or treats more leniently only dissimilar activities, such as operating grocery stores, banks and laundromats, in which people neither congregate in large groups nor remain in close proximity for extended periods."

The chief justice also noted that COVID-19 has killed thousands of people in California and more than 100,000 in the United States with still "no known cure, no effective treatment and no vaccine." He also noted people "may be infected but asymptomatic" and could unknowingly infect others. The state's order restricting crowd sizes, he said, was a means to "address this extraordinary health emergency."

A three-page dissent written by Justice Brett Kavanaugh, joined by Justices Clarence Thomas and Neil Gorsuch, argued that restrictions on the number of participants at church services did violate the Constitution.

Kavanaugh argued that businesses that are not subject to size restrictions, such as supermarkets, restaurants, hair salons and cannabis dispensaries, are comparable to gatherings at houses of worship.

"The church and its congregants simply want to be treated equally," he wrote, adding that California "trusts its residents and any number of businesses to adhere to proper social distancing and hygiene practices."

Richard Garnett, law school professor at the University of Notre Dame and director of the university's Program on Church, State and Society, said the court's decision shows how "it can be challenging to identify discrimination or unequal treatment."

"It is well established that governments and officials may not discriminate against religious activities, even when it is regulating in the interest of the public good. Religious freedom is not absolute, and it is subject to limits, but regulations may not single out religious exercise for disapproval or disadvantage," he said.

In a statement, Garnett said arguments about equality and discrimination involve the question: "compared to what?" And in this case, the justices disagreed about what kinds of activities church services should be compared to for public health purposes.

Kavanaugh said the same rules for stores should apply to churches and the court's majority said the same restrictions on churches also are applied to gatherings like concerts, movie showings, spectator sports and theatrical performances.

Garnett said the ruling "does not necessarily mean that California's current regulations are justified or constitutional or that they would be upheld after more developed and careful review."

Charles LiMandri, special counsel to the Thomas More Society, a national nonprofit law firm based in Chicago that represented the California church, said the court's ruling was disappointing, but the case is "far from over."

He said the decision was based on "the high standard required to get an emergency injunction" but the case would likely make its way to the high court again and the next time it should get "a better result for religious liberty."

On May 29, the court also, without noted dissent, turned down a request from two Romanian American Christian churches in the Chicago area arguing that Illinois' reopening guidelines, with its 10-person limit for houses of worship, violated the Constitution.

In a two-paragraph order, the court said the state's public health department had just issued new guidance on church-participation restrictions May 28 and the churches could file "a new motion for appropriate relief if circumstances warrant."

Provide feedback on this article
Join the conversation: Login or create an account
Before you can comment, you need to update your profile to include your first and last name, as required in our comments policy. Then reload this page and you'll be set up for commenting. Update your profile
Advertisement
More: Coronavirus / Health & Wellness / Health Care / Liturgy