How can Catholics help lead the fight against racism? 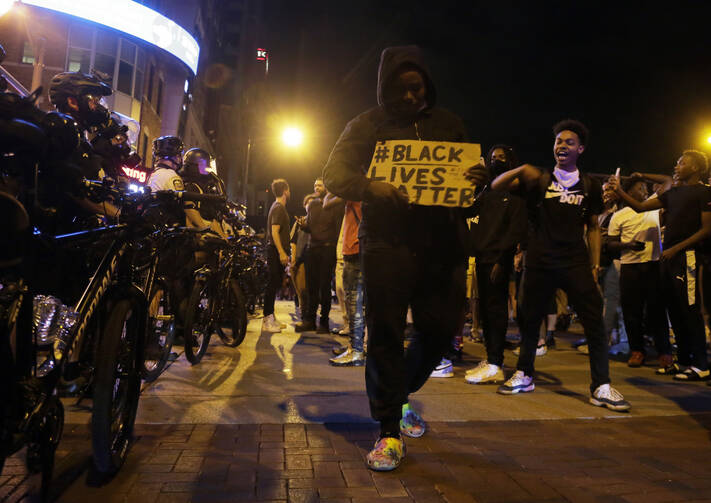 Protesters walk past a line of police in downtown Columbus, Ohio, on Thursday during a demonstration over the death of George Floyd in police custody Monday in Minneapolis. (Barbara J. Perenic/The Columbus Dispatch via AP)

The Covid-19 pandemic has greatly affected people of color across the United States, from disproportionately taking lives in black and Latino communities to fueling racist and xenophobic attacks against Asian Americans.

Here in New York, the city worst hit by the pandemic, my fiancé and I struggle to emotionally support our families, which includes medical professionals whose spiritual lives have been affected by the deaths they see daily. Black and brown Americans here and across the United States are also grappling with the deaths of women and men of color at the hands of police officers or armed citizens, something that has continued unabated during the pandemic.

Far from being desensitized to such news, Americans were almost universally outraged by the death of George Floyd while he was being held by police on Memorial Day.

For example, in March, Breonna Taylor, 26, was shot as she slept in her Kentucky home by Louisville police officers who forcibly entered her apartment to serve a search warrant in a narcotics investigation. And in February, Ahmaud Arbery, 25, was shot by armed white men while jogging in his neighborhood in Georgia.

These were just the latest instances in which unarmed black people were killed by armed citizens acting as vigilantes or by police officers. But far from being desensitized to such news, Americans were almost universally outraged by the death of George Floyd on Memorial Day. Mr. Floyd, 46, was handcuffed on suspicion of passing a counterfeit bill and pinned to the ground by a police officer in Minneapolis, who eventually suffocated Mr. Floyd. Following his death, a video quickly surfaced on social media showing the police officer using his knee to pin down Mr. Floyd’s neck as the latter cries out, “Please, I can’t breathe.” That police officer was taken into custody and charged with third-degree murder on Friday, and he and three other officers have been fired.

Since Mr. Floyd’s death, protests against police misconduct and racism have erupted across the country, including in Minneapolis, where a state of emergency has been declared. Many have condemned the uprising and used it to try to distract attention from Mr. Floyd’s death. But civic and church leaders should not be distracted from standing in solidarity with black Americans by debates over acceptable forms of protest.

Many black and brown Catholics are turning to the church for solace, only to find, at worst, silence, and at best, a delayed response.

Many black and brown Catholics are turning to the church for solace, only to find, at worst, silence, and at best, a delayed response. As of noon on Friday, the United States Conference of Catholic Bishops had not yet released an official statement on any of these deaths, though several individual church leaders had made public comments. They included Cardinal Blase Cupich, who prayed for “solidarity with the people of Minnesota that racism be banished,” and Archbishop Bernard Hebda, who oversees the Archdiocese of Saint Paul and Minneapolis and called for “a full investigation that results in rightful accountability and veritable justice.” (Editor’s note: On Friday afternoon, seven chairmen of committees within the U.S. Conference of Catholic Bishops issued a statement on the death of Mr. Floyd, saying,“We are broken-hearted, sickened, and outraged to watch another video of an African American man being killed before our very eyes.... [L]let each and every Catholic, regardless of their ethnicity, beg God to heal our deeply broken view of each other, as well as our deeply broken society.”)

Father Erich Rutten of St. Peter Claver in St. Paul, put it more frankly and directly: “White supremacy has cost someone their life.”

Every day, black women and men are faced with the reality that in America, all it takes is one person to see your body and the color of your skin as a threat. These thoughts are ever-present, not only when images of black death go viral. Black people are routinely viewed by white citizens and police as suspicious, dangerous and unworthy. Once again, black Americans must confront the dangers of being in a black body while wearing masks in public spaces.

Black people are suffering. How can the church show that it is listening?

There are some long-term goals the church can adopt. Parishes and other worship groups can invite members of the Black Lives Matter movement to discuss the ways the church can become a leader in the fight for racial equality in 2020. (See “What Black Lives Matter can teach Catholics about racial justice,” my America feature story from last year.) The movement has proven that it is effective in galvanizing young Americans, a demographic the church is losing.

Pastors can speak about dismantling racism from the pulpit.

Second, pastors can speak about dismantling racism from the pulpit, extending an invitation for white Catholics to reflect on their white privilege and the ways they are complicit in the sin of racism—elements that played a key role in a New York woman calling 911 to say that “an African American man was threatening her” when she was merely asked to leash her dog.

Third, there should be anti-racism training at all levels of formation in the church, from religious education programs to priestly formation. Formation for religious can include sessions reflecting on the church’s history with slavery and racism and continued efforts to build a more racially just Catholic Church. This will allow the church to create the safe and authentic space necessary for white Catholics and Catholics of color to work through the difficult yet necessary dialogue the church needs right now.

There should be anti-racism training at all levels of formation in the church, from religious education programs to priestly formation.

However, as protests continue across the nation and the cries for justice continue to be heard, there are more immediate ways our church can help.

First, support organizations and community activists that are at the frontlines. Catholics can support organizations like the Minnesota Freedom Fund, which is raising funds and working with the National Lawyers Guild and Legal Rights Center to support activists who are arrested while protesting; Reclaim the Block, a grassroots organization working to combat police corruption in Minnesota; and the Louisville Community Bail Fund, which is working to provide bail funds and post-release support for activists in Kentucky who are protesting the shooting death of Ms. Taylor.

Second, our leaders should be at the frontlines, pulling from the rich examples of Catholic activists within our tradition, from Sister Antona Ebo to Dorothy Day to Sister Norma Pimentel. Imagine the beautiful symbol of accompaniment the church could provide if we saw priests and religious in collars standing in solidarity with activists (whom President Trump has tarred as “thugs”) demanding that our country be a better place for black Americans.

Finally, our leaders can hold a day of mourning and prayer for the black and brown lives lost to police brutality or armed violence. This observance would let black and brown Americans know that the church is listening to their cries, their pain, their trauma.

Pope Francis, during a recent celebration of St. John Paul II, spoke about the need for merciful justice, a principle that tells us that as Catholics, we must fight to give every human being the dignity and resources they deserve. He prayed to John Paul and asked “that he give to all of us, especially to the pastors of the church, but to everyone, the grace of prayer, the grace of closeness and the grace of just mercy, merciful justice.”

To be a merciful church, we must rebuke the violence that took the lives of Ms. Taylor, Mr. Floyd and so many others. This means courageously and radically transforming our church into an active force for justice and a solace when the world seems to tell our people that we do not matter. To be a church that follows Pope Francis means that as Catholics, we are to be a church that sets an example for all Americans and fights for the protection and dignity of all black lives.

@OlgaMSegura
Show Comments ()
Join the conversation: Login or create an account
Before you can comment, you need to update your profile to include your first and last name, as required in our comments policy. Then reload this page and you'll be set up for commenting. Update your profile