The Vatican objects to Israeli plan to annex Palestinian territory 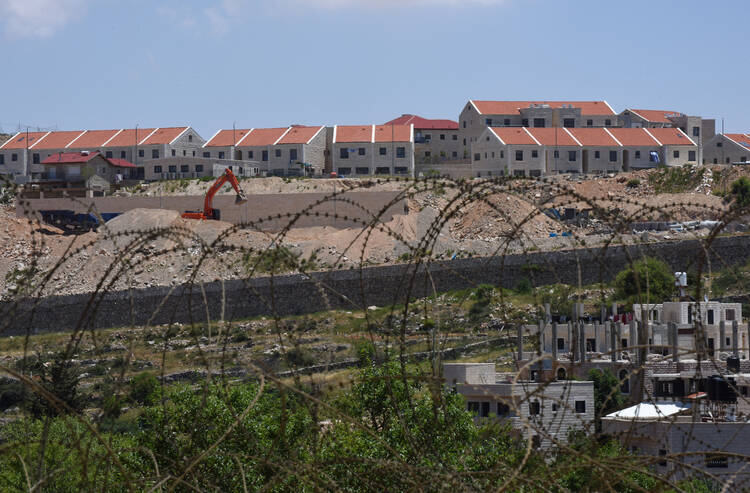 New housing units being built in the Israeli settlement Efrat are seen on the hillside overlooking a Palestinian village near Bethlehem, West Bank, May 10, 2020. The Vatican issued a statement May 20 stating concerns about an Israeli plan to unilaterally annex a large portion of land in the West Bank. (CNS photo/Debbie Hill)

The Holy See today expressed its opposition to an Israeli proposal to annex parts of the Palestinian territories in defiance of international law and the United Nations resolutions governing the territories.

The Israeli annexation plan was included in the agreement for a power-sharing government made by Israeli Prime Minister Benjamin Netanyahu and his former rival, Benny Gantz of the Blue and White party.

The Vatican communicated its opposition to this plan in a statement sent by its press office to the international media after Archbishop Paul Richard Gallagher, the Vatican’s secretary for relations with states, spoke by phone with Saeb Erekat, the chief negotiator and secretary general of the Palestine Liberation Organization, on May 20.

According to the statement, Mr. Erekat phoned the archbishop to “inform the Holy See about recent developments in the Palestinian territories and of the possibility of Israeli applying its sovereignty unilaterally to part of those territories, further jeopardizing the peace process.”

The new statement reiterated the Holy See’s long-held position that “respect for international law and the relevant United Nations resolutions is an indispensable element for the two peoples to live side by side in two states, within the borders internationally recognized before 1967.”

It said, “The Holy See is following the situation closely and expresses concern about any future actions that could further compromise dialogue.”

The new statement reiterated the Holy See’s long-held position that “respect for international law and the relevant United Nations resolutions is an indispensable element for the two peoples to live side by side in two states.”

At the same time, the statement expressed hope “that Israelis and Palestinians will be soon able to find once again the possibility for directly negotiating an agreement, with the help of the international community, so that peace may finally reign in the Holy Land, so beloved by Jews and Christians and Muslims.”

Earlier this year, in his address to the diplomatic corps accredited to the Holy See on Jan. 9, Pope Francis reiterated “the urgent need for the whole international community to reconfirm, with courage and sincerity, and in respect for international law, its commitment to support the Israeli-Palestinian peace process.”

Israel has occupied the West Bank after it defeated its neighbors, Egypt, Jordan and Syria, in the six-day Arab-Israeli war in June 1967. It has continued to build settlements in Palestinian territories in defiance of international law and relevant U.N. resolutions.

Supported by the Trump administration, it is now considering the annexation parts of the West Bank in the coming months. Although Israel has not yet announced a timetable for this move or indicated which parts of the territories it would bring under its control, the proposal has already provoked a strong reaction from the Palestinian Authority.

Its president, Mahmoud Abbas, announced that the Palestinian administration would no longer be bound by existing agreements with Israel and the United States, including in the field of security cooperation. Jordan’s King Abdullah II, along with other Arab leaders, also oppose the plan, and he warned that annexation would lead to a major conflict with his country.

The controversial plan for peace in the Middle East proposed by the Trump administration earlier this year envisages that around 30 percent of the West Bank would be incorporated into Israel. That plan caused great alarm not only in other parts of the Middle East but also in Europe where such annexation is viewed as ending the possibility of a negotiated two-state solution to the more than 70-year-old Israeli-Palestinian conflict.