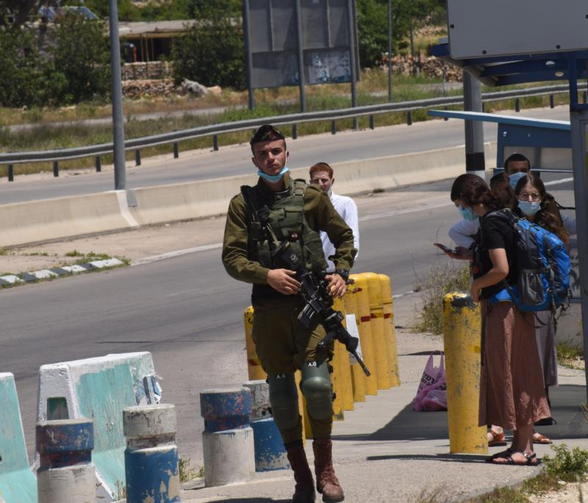 An Israeli soldier guards at the Gush Etzon Settlements junction near Bethlehem, West Bank, May 10, 2020. The settlements in the Gush Etzon region would be included in the proposed annexation plan by Israeli Prime Minister Benjamin Netanyahu. (CNS photo/Debbie Hill)

JERUSALEM (CNS) -- Moving forward with an Israeli plan to unilaterally annex West Bank land could mean the end to the already languishing Palestinian-Israeli peace talks, said the heads of the Holy Land churches.

"An array of plans for Israel to unilaterally annex West Bank land, backed mainly by right-wing factions, raises serious and catastrophic questions about the feasibility of any peaceful agreement to end the decadeslong conflict, one that continues to cost many innocent lives as part of a vicious cycle of human tragedy and injustice," the church leaders said in their statement.

Among those who signed the May 7 statement were Archbishop Pierbattista Pizzaballa, apostolic administrator of the Latin Patriarchate of Jerusalem, and Franciscan Father Francesco Patton, custos of the Holy Land.

Also in early May, Israeli Defense Minister Naftali Bennett initially approved a construction project that has been under discussion for 20 years and would see 7,000 new housing units built in the West Bank Israeli settlement of Efrat, expanding the settlement toward its border with Bethlehem.

U.S. President Donald Trump has expressed support for the annexation plan, which would bring 30% of the West Bank under Israeli permanent control, contingent upon the offering of limited statehood to the Palestinians in the remaining territory -- something the Palestinians have rejected.

The of patriarchs and heads of the Holy Land churches said they viewed such unilateral annexation plans "with the utmost concern." They called upon Israel "to refrain from such unilateral moves, which would bring about the loss of any remaining hope for the success of the peace process."

The church leaders called on the United States, the Russian Federation, the European Union and the United Nations to respond to the plans with a time-defined and phased peace initiative of their own based on international law and U.N resolutions to "to guarantee a comprehensive, just and long-lasting peace in this part of the world that is considered holy by the three Abrahamic faiths."

They also urged the Palestine Liberation Organization, which they called "the sole legitimate representative of the Palestinian people," to resolve all internal and factional conflicts so it could present a united front "dedicated to achieving peace and the building of a viable state that is founded upon pluralism and democratic values."

Regarding settlement expansion, Palestinian and Israeli opponents of the plan say it will prevent any potential expansion of Bethlehem, already being blocked on two sides by other building projects in Efrat and in Har Homa. Israel considers Har Homa a neighborhood of Jerusalem, but Palestinians call it a settlement built on land belonging to Palestinians from the city of Beit Sahour.

The nongovernmental organization Israeli Peace Now indicated it intends to file a court petition against the Efrat building plan.

"This is a cynical move by a caretaker defense minister at the end of his mandate, while the nation is still reeling from the corona crisis, to advance a dangerous plan aimed at entrenching permanent Israeli domination in the southern West Bank and harming the prospect of a two-state solution," Israeli Peace Now said in a statement.

The Latin Patriarchate has spoken against settlement expansion and land appropriation, including in November 2018, when several acres of its own land in the northern Jordan Valley were taken by Israeli military authorities. In 2017 the patriarchate spoke against a quickly passed law that allowed the Israeli government to seize private Palestinian lands where unauthorized Israeli settlements had been built.

Judith Sudilovsky - Catholic News Service
Provide feedback on this article
Join the conversation: Login or create an account
Before you can comment, you need to update your profile to include your first and last name, as required in our comments policy. Then reload this page and you'll be set up for commenting. Update your profile