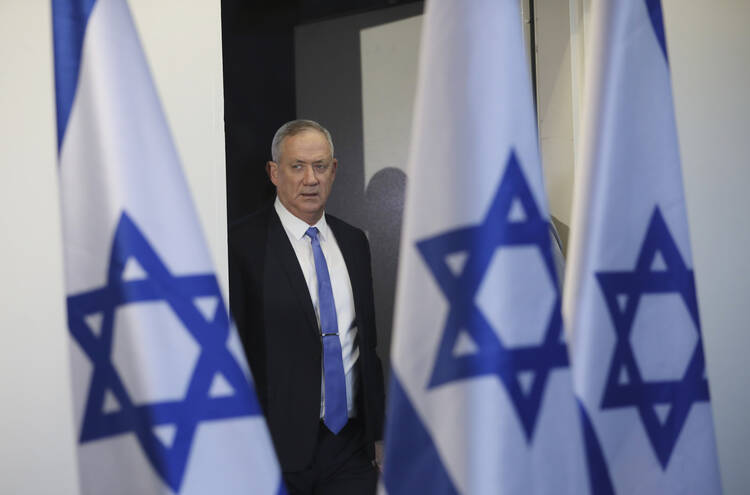 WASHINGTON (AP) — Prime Minister Benjamin Netanyahu's spokesman says the Israeli leader will ask his Cabinet on Sunday to approve his plan to annex parts of the West Bank.

Jonathan Urich made the announcement on Twitter late Tuesday, shortly after Netanyahu joined President Donald Trump for the unveiling of a new U.S. peace plan.

The plan calls for leaving the strategic Jordan Valley and all Israeli settlements under Israeli control.

THIS IS A BREAKING NEWS UPDATE. The AP's previous story is below.

President Donald Trump on Tuesday unveiled his long-awaited Middle East plan, which was celebrated by Israeli Prime Minister Benjamin Netanyahu as a “vision for peace” but is likely to continue to be opposed by Palestinians who say it favors Israel and falls short of their goal of creating a viable independent state.

Trump's plan calls for the creation of a State of Palestine with its capital in east Jerusalem while recognizing Israeli sovereignty over major settlement blocs in the West Bank — something the Palestinians are unlikely to accept.

Trump called his plan a “win-win” for both Israel and the Palestinians, but it was created without input from Palestinian leaders and they already had rejected it before the president unveiled it at the White House with Netanyahu by his side.

Trump acknowledged that he has done a lot for Israel, but he said he wanted the deal to be a “great deal for the Palestinians." He said his vision gives the Palestinians the time needed to rise up and meet the challenges of statehood.

Thousands of Palestinians protested in Gaza City ahead of the announcement, burning pictures of Trump and Netanyahu and raising a banner reading “Palestine is not for sale.”

Palestinian President Mahmoud Abbas said he planned to hold an emergency meeting to discuss the plan and invited officials of Hamas, an Islamic militant group that seeks Israel's destruction. The official Wafa news agency quoted Hamas leader Ismail Haniyeh as calling on Palestinian factions to set their differences aside and unite against the plan.

The plan calls for a four-year freeze in new Israeli settlement construction, during which time details of a comprehensive agreement would be negotiated. However, it was not immediately clear if the freeze could be extended if a final deal is not concluded in the four years.

Trump said he sent a letter to Abbas to tell him that the territory that the plan has set aside for a new Palestinian state will remain open and undeveloped for four years.

"It's going to work," Trump said. "If they do this, it will work. Your response to this historic opportunity will show the world to what extent you are ready to lead the Palestinian people to statehood."

"President Abbas, I want you to know, that if you chose the path to peace, America and many other countries ... we will be there to help you in so many different ways. And we will be there every step of the way," Trump said.

The 50-page political outline goes further in concessions to the Palestinians than many analysts had believed was likely. However, it would require them to accept conditions they have been previously unwilling to consider, such as accepting West Bank settlements. It builds on a 30-page economic plan for the West Bank and Gaza that was unveiled last June and which the Palestinians have also rejected.

Under the terms of the “peace vision" that Trump's son-in-law and senior adviser Jared Kushner has been working on for nearly three years, the future Palestinian state would consist of the West Bank and Gaza, connected by a combination of above-ground roads and tunnels.

Netanyahu and his main political challenger in March elections, Benny Gantz, had signed off on the plan.

The White House event came as Trump's impeachment trial continues in the Senate and Israel's parliament had planned a hearing to discuss Netanyahu’s request for immunity from criminal corruption charges. Netanyahu withdrew that request hours before the proceedings were to begin, but Israel's parliament, the Knesset, is still expected to meet. The body had been likely to vote against immunity, dealing Netanyahu a blow.

In the run-up to the March 2 election, Netanyahu had called for annexing parts of the West Bank and imposing Israeli sovereignty on all its settlements there. Israel captured the West Bank in the 1967 Mideast war, and the Jordan Valley in particular is considered a vital security asset.

Security responsibility for the Jordan Valley would remain in Israel's hands for the foreseeable future but could be scaled back as the nascent Palestinian state builds its capacity, under the terms of the plan, which says that statehood will be contingent on the Palestinians meeting international governance criteria.

U.S. officials, speaking on condition of anonymity ahead of the plan's release, said they expected negative responses from the Palestinians, as well as Turkey and Iran, but were hopeful that Jordan and Egypt, the only two Arab nations to have peace treaties with Israel, would not reject it outright. The officials said they expected Gulf Arab states like Saudi Arabia, the United Arab Emirates and others to cautiously welcome the plan.

The reaction of Jordan, which would retain its responsibilities over Jerusalem's al-Aqsa Mosque under the plan, will be particularly significant, according to the officials, who said Kushner and others were reaching out to Arab leaders ahead of the rollout.

The Palestinians see the West Bank as the heartland of a future independent state and east Jerusalem as their capital. Most of the international community supports their position, but Trump has reversed decades of U.S. foreign policy by siding more blatantly with Israel. The centerpiece of his strategy was recognizing Jerusalem as Israel’s capital and moving the American Embassy there. He's also closed Palestinian diplomatic offices in Washington and cut funding to Palestinian aid programs.

Those policies have proven popular among Trump’s evangelical and pro-Israel supporters and could give him a much-needed boost from his base as he gears up for a reelection battle this year.

But the Palestinians refuse to even speak to Trump and they called on support from Arab leaders. The Palestinian leadership also has encouraged protests in the West Bank, raising fears that the announcement in Washington could spark a new round of violence. Ahead of the announcement, the Israeli military said it was reinforcing infantry troops along the Jordan Valley.

Aron Heller - Associated Press
@openpublish
Provide feedback on this article
Join the conversation: Login or create an account
Before you can comment, you need to update your profile to include your first and last name, as required in our comments policy. Then reload this page and you'll be set up for commenting. Update your profile
Show Comments ()
Comments are automatically closed two weeks after an article's initial publication. See our comments policy for more.