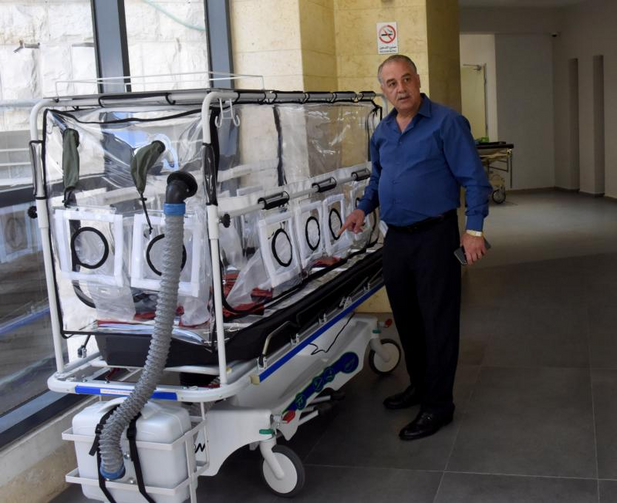 JERUSALEM (CNS) -- When the Israeli Ministry of Health asked St. Joseph's Hospital to set up a coronavirus unit, the hospital had it completed within a week.

Jamil Koussa, general director of the hospital, said normally it would take 20 days to prepare such an infectious disease unit, which requires special negative pressure pumps to clear the air of infectious germs, a special communication setup between the patients' rooms and medical staff, and surveillance cameras. St. Joseph's Hospital, run by the Sisters of St. Joseph of the Apparition, closed all its departments except the maternity ward in order to set up the 28-bed coronavirus wing.

"We started (planning) when it we saw the virus becoming a global pandemic," said Asef Odeh, head nurse of the coronavirus unit. "We are an important part (of the medical response) to the coronavirus. There are many cases in Jerusalem. Right now we feel we are ready to receive patients."

The 20 nurses -- selected from 35 who had volunteered for the unit -- received training from three of the hospital's medical specialists as well as from specialists from the Israel's Shaare Tzedek Medical Center.

In mid-April, St. Joseph received its first three patients, said Koussa. The Catholic hospital is one of three in East Jerusalem with COVID-19 units.

Israel does not release an official separate count of the number of cases of COVID-19 in East Jerusalem, but Palestinian community activists and health workers have put the number unofficially at 140 as of April 19.

The number has been exponentially increasing, said Koussa, and health workers are concerned that the numbers will increase even more during Ramadan, set to begin April 23.

Sitting in his office and fielding a phone call from an official from the Palestinian Authority, Koussa explained that in addition to having to coordinate the unit and facing an 80 percent decrease in its income, the hospital is also facing a personnel logistical problem. Seventy percent of the medical staffers are from the West Bank cities of Bethlehem and Ramallah and, although they have travel permits to come into Israel, Palestinian security has strict regulations at border checkpoints because of the higher rate of COVID-19 in Israel.

The hospital has arranged for long-term lodging for some of the staff who are unable to return to their homes.

Head midwife Iman Ramadan, who is from Bethlehem, has been in Jerusalem since March 8, taking only one two-day visit to see her family.

"When I came to work in Jerusalem, I knew that maybe there would be security reasons I would not be able to go home. But I never imagined it would be because of a virus, for two months or for who knows how much longer," said Ramadan.

Koussa said he is facing some difficult decisions and fears he will have to close the hospital doors in May if funds are not forthcoming.

"We can't depend on the Israeli Ministry of Health, and the Palestinians ... don't have enough money to give us," he said.

So far the Israeli Ministry of Health has given St. Joseph's and the other East Jerusalem hospitals only half of the $563,000 promised each of them to finance the coronavirus units, he said, and one ventilator.

In mid-April, the ministry sent them 2,000 face masks, but those will last for only two weeks, and staffers are down to their last four testing swabs of the 50 swabs they received in March, he added.

On April 18, the Vatican Congregation for Eastern Churches -- on behalf of Pope Francis -- donated three ventilators to the hospital. It also set up an emergency fund for countries it serves in the Middle East, in collaboration with the New York-based Catholic Near East Welfare Association and the Pontifical Mission for Palestine.

In addition, the U.S. bishops' Catholic Relief Services, the German Catholic Association and an organization associated with the apostolic delegate in Jerusalem each donated a ventilator to the hospital. The Franciscan custos of the Holy Land donated an isolation negative pressure trolley to transport COVID-19 patients when necessary.

"We know we are facing an ordeal, but we know we will overcome it," said Dima Said, deputy nurse director. She said for some of the Christian staff, being able to pray in the hospital's chapel according to safety regulations helps give them strength. "We are strong in our faith."