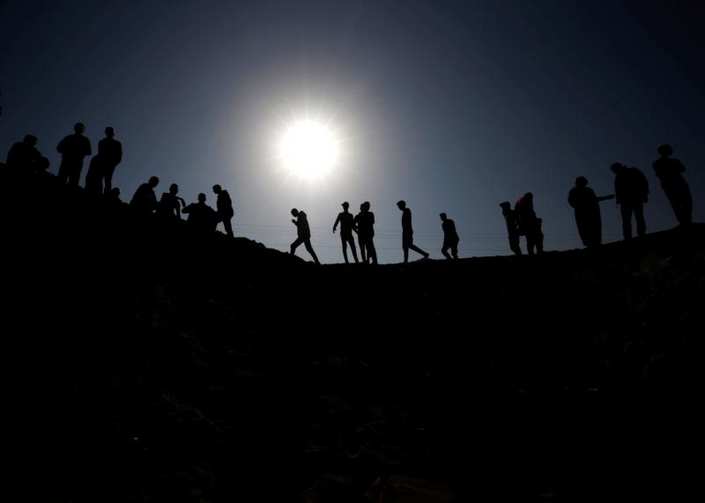 JERUSALEM (CNS) -- In addition to a sense of isolation, young people in the Gaza Strip are experiencing an unemployment rate of 70 percent, and most see emigration as their only solution, said Archbishop Timothy Broglio of the U.S. Archdiocese of the Military Services.

"This is a challenge for young people," he told Catholic News Service Jan. 13. "They are facing uncertainty and insecurity about their future."

"The future for the young people is very tenuous," Archbishop Broglio said. "Basically, the only solution they see is getting out. But that is very problematic, because once they do get out, there is no coming back (because of travel restrictions.) Leaving means an indefinite separation for families."

Basics such as water and electricity are interrupted daily, he said.

The Gaza Strip has been under an air, land and sea blockade imposed by Israel and Egypt in 2007, when Hamas took control of the Palestinian area from the Fatah-led Palestinian Authority. The 1.8 million Palestinian residents of the coastal Gaza Strip are cut off from the remainder of the Palestinian territory by the blockade, which also restricts their free travel access to the rest of the world.

The United States, the European Union, Australia, New Zealand, Canada, Egypt, Israel and other countries list Hamas as a terrorist organization, charging that it is funded by Iran.

The bishops began their visit in Gaza and celebrated Mass with members of Holy Family Catholic Parish there Jan. 12. They also met with local families and religious sisters working in Catholic charitable institutions and visited the Daughters of Charity, the Thomas Aquinas Training Center and the Caritas Medical Center.

With just over 1,000 people, the Christian community in the Gaza Strip is very tiny, but the educational, vocational and health services it provides to the general population are highly regarded.

Archbishop Broglio said that just over 10 percent of the 700 students attending Catholic school are Catholic; the majority of students are Muslim.

Irish Bishop Noel Treanor of Down and Connor noted that while the Thomas Aquinas Training Center provides advanced training for young people, the availability of good jobs is so minimal that often thousands of applicants vie for one position.

"Opportunities are so limited ... the current situation is not sustainable," he said. "A solution must be found. Though the Catholic community is vibrant, the number of Catholics has gone down drastically ... and the fact so many people are leaving has an impact on the Christian population."

But finding a solution to the situation in Gaza is no easy task, said Canadian Archbishop Richard Gagnon of Winnipeg, Manitoba.

"We need to try to educate people as to the situation here. It is a very complex issue, where you have the internal issue of Gaza and the approach and thinking by the current (Hamas) government, and there is a confrontational situation where there is tension between the Gaza territory and the government of Israel, and this also needs to be brought within context. It is very complicated."

Since 2001, thousands of missiles have been launched from the Gaza Strip into southern Israel border towns, sometimes resulting in Israeli retaliatory attacks that have caused overwhelming destruction in Gaza.

Still, despite the political complexity and economic difficulties people face in their daily lives in Gaza, Archbishop Gagnon said, he was struck by the real sense of joy and positivity he sensed within the Catholic community.

"They have a real sense of who they are and what their identity is," said Archbishop Gagnon. "They provide wonderful opportunities for people in Gaza, both Christians and non-Christians, through their schools and charitable organizations."

During their stay in the Holy Land the bishops will also meet with young Palestinians in East Jerusalem; visit Holy Family Parish in Ramallah, West Bank; visit a kindergarten run by the Comboni Sisters under the shadow of the Israeli separation wall in East Jerusalem; and tour the Jerusalem Old City Basin to review Israeli settler activity in the contested area.

Judith Sudilovsky - Catholic News Service
Provide feedback on this article
Join the conversation: Login or create an account
Before you can comment, you need to update your profile to include your first and last name, as required in our comments policy. Then reload this page and you'll be set up for commenting. Update your profile
Show Comments ()
Comments are automatically closed two weeks after an article's initial publication. See our comments policy for more.