How well will Catholic media weather the coronavirus downturn? 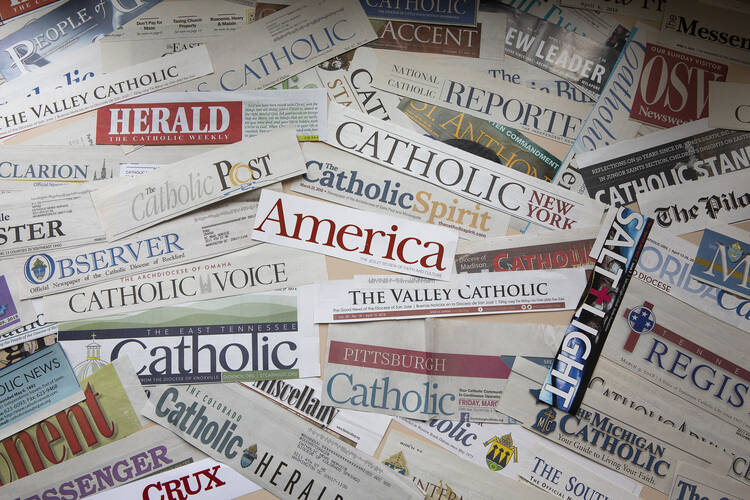 Hugues de Foucauld, C.E.O. of Bayard North America, said the decision to cease print publication of four Bayard magazines was not due to the coronavirus. (CNS photo/Tyler Orsburn)

As the U.S. economy slumps because of coronavirus countermeasures and statewide shelter-in-place orders, secular and religious media organizations have resorted to furloughs, layoffs and publication suspensions to weather the financial toll.

“As you know, the business environment in which we operate has become more challenging, particularly in the parish and school markets,” wrote Hugues de Foucauld, the chief executive officer of Bayard North America, in a press release. “Bayard is however committed to [continuing] to provide high-quality resources and services to our readers and customers.”

In March, the Diocese of Pittsburgh announced that its longtime newspaper, Pittsburgh Catholic, would cease publication. Catholic Outlook, the newspaper published by the Diocese of Tucson, Ariz., was on course to meet the same fate until the diocese obtained a Small Business Administration loan to help keep it afloat.

Secular media is not immune to this struggle. According to The New York Times, by mid-April approximately 28,000 staffers at U.S. media companies had been laid off. Executives at Gannett, a major newspaper chain, faced salary reductions of 25 percent, while Maven, which publishes Sports Illustrated, laid off 31 employees. Vox Media, the owner of New York Magazine, plans to furlough some 100 staffers, and Condé Nast put the brakes on hiring.

But in an interview with America, Mr. de Foucauld insisted that the shutdown of the four Bayard titles did not result from the economic constraints caused by the pandemic. “Covid-19 is not responsible for the decision,” he said, explaining that the move to cease publishing had been under consideration for a long time.

Mr. de Foucauld declined to tell Catholic News Service how many people would lose their jobs. “It’s a painful decision for us. It’s a decision that has to be done. I’m most respectful of those people who are doing a great job,” Mr. de Foucauld said.

“We do have the energy and people enough to prepare carefully for the future.”

Mr. de Foucauld said that all newspapers and magazines are facing issues surrounding advertising, subscribers and “monetization of the [internet] audience.” He added that Bayard has “created a new relationship” with digital platforms and resources.

C.P.A. President J.D. Long-García: “The collections are way down across the board and especially when we miss a big attendance Mass, like Easter. That’s going to have a domino impact on things.”

Catholic publications, he said, are heavily reliant on donations, subscriptions and advertising to cover operating costs, so a decrease in any of these revenue streams forces a reallocation of resources.

“The collections are way down across the board and especially when we miss a big attendance Mass, like Easter. That’s going to have a domino impact on things,” said J.D. Long-García, the president of the Catholic Press Association. Mr. Long-García, a senior editor at America, said that the economic recovery for the U.S. church will naturally “lag behind” the nation’s recovery.

The C.P.A. has established a Covid-19 task force to address the continuing revenue crisis and to meet with leaders of diocesan publications by region. The association is also considering opening an emergency fund to help keep Catholic publishers in business.

The Poynter Institute for Media Studies reports that more than 70 community newspaper sites had laid off or furloughed staff, cut the frequency of publication or suspended publication altogether since the advent of the health crisis. Layoffs also have affected radio, television and digital media, but they have not been as extensive as those in print journalism.

“We are expecting more publications to close, and the role of the C.P.A. is to mitigate that,” said Mr. Long-García. He has already watched the number of Catholic publications decline over the last two decades, owing, in part, to the rise of digital media.

In his bi-monthly column “Of Many Things,” Matt Malone, S.J., America’s editor in chief, considered the future of the Catholic press. Noting the “existential threats facing the media business generally and the Catholic press in particular” since he began his tenure in 2012, he argued that a transition to digital production seemed the inevitable path ahead.

He writes: “America is better positioned than most to meet the challenges of the digital age...we have worked successfully over the last several years to transform America Media into a truly digital-first, multi-platform organization.”

Greg Erlandson, the director and editor in chief of C.N.S., told America that Catholic media has faced difficulties since the Great Recession over a decade ago. The coronavirus pandemic only compounds these pressures.

“We have a crisis on top of a crisis. There was already a crisis in terms of advertising and in terms of support in the number of free alternatives that are out there, especially online. And now you have this avalanche of bad news in terms of the economy that is hitting people now,” said Mr. Erlandson.

Mr. Long-García emphasized the need for Catholic media and for the church to pay special attention to its communications efforts, particularly during this period of increased social isolation and physical distance from parishes. “The diocesan publication is still one of the primary, if not the primary, mode [through which] Catholics get their news,” he said.

“[The faithful are] not coming to church, so how are you talking to them? And I think that’s an open question: How is the church talking to its people right now?”

Mr. Erlandson agreed, describing a need for increased communications and Catholic journalism to tell how the church is carrying out its mission during this public health emergency. “My hope is that the [U.S.] bishops recognize that this is a time when communication is more important than ever,” he said.

He called on the faithful to continue or increase contributions to their churches and stay engaged with their parish communities. “I’m hoping people will come back with a renewed sense of commitment…. Barring that, the future could look bleak. I’m hoping this is, ironically, a ‘come to Jesus’ moment,” said Mr. Erlandson.