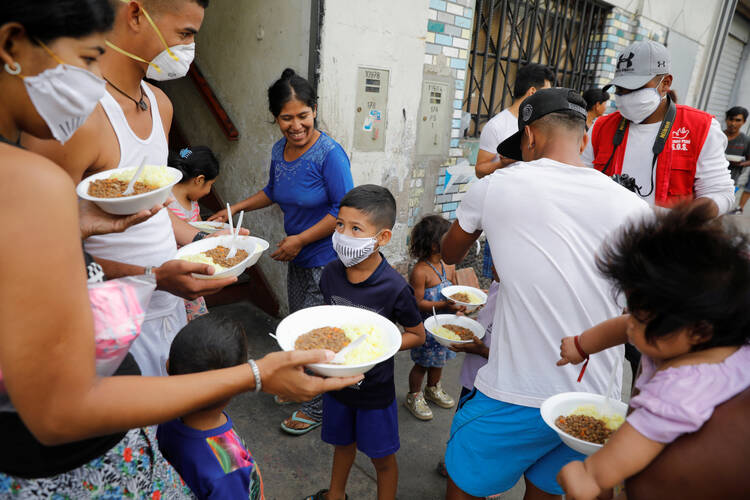 Even though the current migrant movements in Latin America are much smaller than other dislocations experienced in recent years, a significant number of people from Haiti, Central America and Venezuela are still leaving their home countries to travel across the region in search of a better life.

They have been caught in the middle of these journeys by the Covid-19 pandemic, which poses a great risk to these already vulnerable groups. The Latin American church is building up its support structure to respond to this emerging crisis.

“The border with Guatemala has been closed, but there are at least 400 blind spots through which people can cross into Mexico without being monitored by the authorities,” Conrado Zepeda, S.J., told America.

Father Zepeda works at a Jesuit-run migrant shelter in the city of Huichapan, a town in the Mexican state of Hidalgo, along the migrant route to the United States. People who find respite there come mostly from Honduras, Nicaragua, Guatemala, El Salvador and Haiti, and they often stay at the center for at least one night. “They keep coming, unfortunately without enough information on the pandemic, given they’re not watching TV. As soon as we tell them the number of cases and deaths in different countries, they understand the seriousness of the situation,” Father Zepeda said.

Migrants from Haiti, Central America and Venezuela have been caught in the middle of their journeys by the Covid-19 pandemic. The Latin American church is building up its response to this emerging crisis.

To a great extent, the Central American immigrants that pass through Huichapan are young and healthy men and women. “But they have walked for weeks in the open air and with little food,” Father Zepeda said. “In their journey, they don’t have adequate access to hygiene products and facilities. They’re certainly vulnerable when it comes to the risk of infection.”

Father Zepeda, a member of the Mexican bishops’ commission dealing with migration, believes xenophobia may be provoked among average Mexicans if cases of Covid-19 begin to appear among these migrants. “For years people have been saying in Mexico that immigrants bring diseases, even Ebola, with them,” he said.

The church in Mexico and Central America is making a great effort to assist immigrants during the coronavirus crisis. More than 80 percent of the migrant centers on the route to the United States are managed by the church, Father Zepeda said. “While many organizations decided to close their houses during the pandemic, we decided to keep working. We have to make people aware of prevention measures,” he said. “We can’t abandon these people in such hard times. It’s an evangelical decision.”

In South America, another migration crisis is an ongoing worry. According to Elvy Monzant, the executive secretary of the Latin American and Caribbean Network on Migration, Refugees and Human Trafficking, though their numbers are not as significant as the migrant wave at the end of 2018 and in 2019, the movement of people fleeing economic and political instability in Venezuela into Colombia continues.

“We don’t know how many Venezuelan immigrants are traveling and sleeping on the street at this point,” he said. Many are already in overcrowded migrant shelters. Others have become laborers in host states, where they are often exploited and “forced to work during the quarantine,” Mr. Monzant said. “In all cases, they’re very vulnerable in the pandemic.”

“We don’t know how many Venezuelan immigrants are traveling and sleeping on the street at this point.” Others have been “forced to work during the quarantine...In all cases, they’re very vulnerable in the pandemic.”

The Catholic migrant centers that receive Venezuelans managed to obtain and distribute masks for the protection of their guests. Parish refectories are not allowing migrants to eat on the premises but are serving meals that can be taken away. “If the situation gets worse, we’ll have problems,” he said.

The Colombian city of Cucuta, on the border with Venezuela, has become a major destination for migrants. When the borders were closed because of the coronavirus, many decided to stay in the area. The Colombian government estimates that there are at least 180,000 Venezuelans there. “They live in a rather fragile condition, working in the informal economy,” the local bishop, the Most Rev. Victor Ochoa, told America.

“The government and the church are trying to help them out, but the situation is very complex,” he said. There have been 15 cases of Covid-19 in Cucuta, according to the bishops, but noncitizens, including undocumented ones, can receive medical treatment in Colombia.

The local diocese and the congregations that provide services to migrants in Cucuta have been supported by Spanish, German and U.S. churches. “But many had to close their doors now due to the new risks. Our center still works with 180 people, but it’s not accepting new migrants at this point,” said Bishop Ochoa.

“Last Sunday, the church and other organizations distributed groceries for 10,000 people, and they’ll be able to live about a month with that. We’re also giving them medicine,” he said.

Church organizations are not only active in providing shelter and food to immigrants but are also denouncing violations of their rights and proposing public policy to local governments to better protect them.

Peru, the country with the second biggest population of Venezuelan refugees, has imposed a lockdown in order to contain the spread of the coronavirus that causes Covid-19. Now one of the main concerns of the economist Humberto Ortiz Roca, an advisor to the president of the Peruvian bishops’ conference, is Venezuelans’ ability to work in Peru.

“They usually don’t have any kind of savings, so they have to go to work. This makes them very vulnerable,” he said.

Local quarantines make the work difficult, but the church can only help people by visiting individual migrants and their families, using the local parishes as a platform to gather and distribute donations, according to Mr. Ortiz Roca.

At the beginning of March, he attended a meeting of the episcopates of Bolivia, Peru, Ecuador, Colombia and Venezuela to discuss the migration crisis. “The church is very worried about the migrants in the region,” Mr. Ortiz Roca said, noting that few Latin American states have established public policies that address the needs of migrating people. “Some countries frequently yield to xenophobic pressures; others are on the verge of persecuting foreign migrants,” he said.

Indeed, one of the greatest risks in the context of the pandemic is the potential abuse of migrants’ human rights within the nations they pass through or that host them. “It’s reasonable that local governments are trying to prevent the spread of coronavirus,” said Sister Rosita Milesi, the director of the Scalabrinian Sisters’ Institute of Migrations and Human Rights in Brazil, “but their [precautionary] measures can’t ignore the international protection conferred to all populations in situations of vulnerability, especially the ones who are seeking refuge.”

Church organizations are not only active in providing shelter and food to immigrants, Sister Milesi said, but are also denouncing violations of their rights and proposing public policy to local governments to better protect them.