What will happen to people who are homeless as Covid-19 crisis continues? 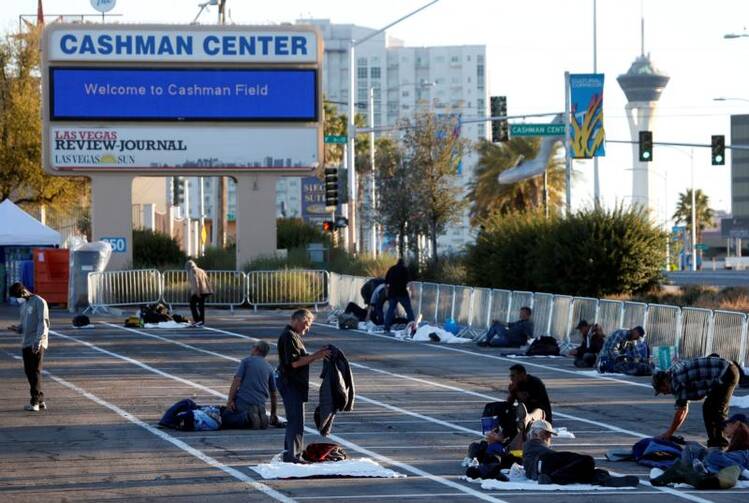 Homeless people get settled in a temporary parking lot shelter at the Cashman Center in Las Vegas March 30, 2020, with spaces marked for social distancing to help slow the spread of COVID-19. (CNS photo/Steve Marcus, Reuters)

While cases of the new coronavirus skyrocket across the United States, especially in hotspots like New Orleans and New York City, government leaders and public health officials repeat a new national refrain: “Stay home.” The White House and the Centers for Disease Control and Prevention have issued clear guidance that in order to “flatten the curve,” or reduce the national caseload to prevent overwhelming hospital capacity, Americans must practice social distancing and stay at home as much as possible. But for the approximately 550,000 homeless persons in the United States, the spread of Covid-19 presents a uniquely grave threat. For these Americans, calls to remain home are impossible to heed.

Msgr. Kevin Sullivan, the executive director of Catholic Charities of New York, said that the needs of the homeless—for shelter, food and mental health assistance—have not changed during this time of crisis. He added that the current lack of people moving about the city in fact makes it more difficult for the homeless to obtain money or food.

“There were far too many homeless people on the streets and in shelters...three months ago when we didn’t even know the word ‘coronavirus,’” said Monsignor Sullivan.

“[Catholic Charities of New York] is reaching out and providing support to those of our agencies that actually are housing homeless people, making sure they have what they need to provide those services,” Monsignor Sullivan said. “In addition, we are continuing and we are prepared to increase our food programs, even though because of the [citywide] directives we’ve now moved them into grab-and-go types of situations,” he said.

Shelters in the city are already affected by overcrowding, likely to grow worse as more people seek temporary housing in the coming weeks. “There were far too many homeless people on the streets and in shelters...three months ago when we didn’t even know the word ‘coronavirus,’” said Monsignor Sullivan. “There will be homeless people on the street come October or November, when hopefully this has dissipated.”

“One of the things I can say to you is: At Catholic Charities, we’re open for business.” The organization has also moved to provide remote support to the homeless, holding formerly in-person, biweekly meetings of an education program via phone call.

According to The New York Times, “the largest homeless population in the country” can be found in New York City, where there are now nearly 52,000 confirmed cases of Covid-19. New York State now accounts for about 40 percent of total U.S. coronavirus cases. According to the Coalition for the Homeless, some “132,660 different homeless men, women and children” slept in the city’s shelter system during the 2019 fiscal year.

In a letter on March 26 to the New York City Departments of Law and Social Services, the Legal Aid Society, which provides representation for low-income city residents, called on the city to “immediately provide hotel placements to everyone who needs one.” The society charges that the city agencies have violated the terms of a 1979 New York Supreme Court decision that guaranteed shelter for the city’s homeless people.

The society reminded city officials that health challenges and underlying medical conditions among many homeless people in the city, including blood disorders, advanced age and heart and lung diseases, will make them acutely vulnerable to Covid-19.

The Washington Post says that the “most underserved” homeless communities are found in Washington, Oregon, California, Maine and Washington, D.C. In California, where there are some 180,000 people experiencing homelessness statewide, Gov. Gavin Newsom has put $150 million toward efforts to shelter people sleeping on the streets. California has also allocated $50 million to move homeless people into hotels or trailers.

Washington, D.C., has begun to provide shelter in hotels for its homeless population after five homeless people tested positive for Covid-19 on March 31 in three separate shelters across the city. Cases have also been reported at St. Elizabeth’s Hospital, a psychiatric facility in the district.

In California, where there are some 180,000 people experiencing homelessness statewide, Gov. Gavin Newsom has put $150 million toward efforts to shelter people sleeping on the streets.

The U.S. Senate unanimously passed on March 25 a landmark $2 trillion stimulus package as markets fluctuated wildly due to coronavirus concerns and nearly 10 million Americans filed for unemployment benefits. The National Alliance to End Homelessness notes that the bill includes $4 billion for homeless assistance.

C.D.C. officials established guidelines for protecting the homeless during the ongoing pandemic. “Outdoor settings may allow people to increase distance between themselves and others,” they wrote. “However, sleeping outdoors often does not provide protection from the environment, quick access to hygiene and sanitation facilities, or connection to healthcare.”

Their plan includes organizing law enforcement to protect the unsheltered and utilizing mental health professionals to assist those with substance abuse issues and other psychological challenges. The C.D.C. also recommends “isolation housing” to separate homeless people diagnosed with Covid-19 from the larger community.

Pope Francis addressed the suffering of the homeless during the coronavirus pandemic during a live-streamed Mass on April 2. He called on St. Teresa of Calcutta “to awaken in us a sense of closeness to so many people in society who, in everyday life, live hidden but, like the homeless, in the moment of the crisis, are [discovered] living this way.”