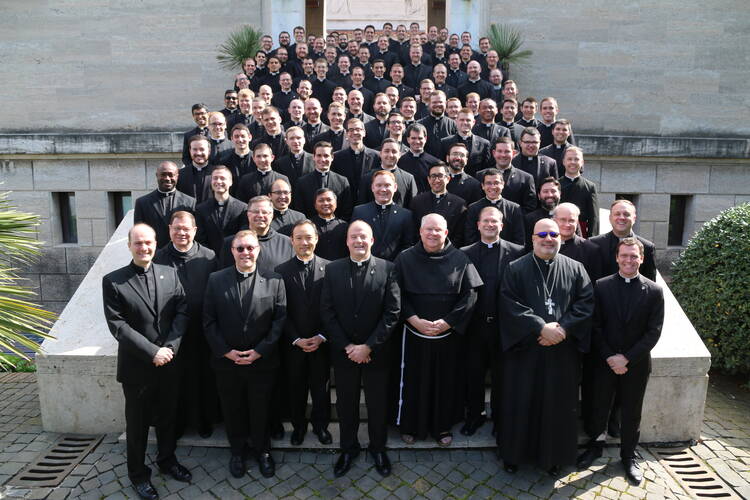 The staff and 92 seminarians at the Pontifical North American College in Rome pose for a photograph March 15, 2020, on the steps leading to the seminary chapel. A week later, the college informed the seminarians that they should return to the United States because of the ongoing COVID-19 pandemic. (CNS photo/courtesy of the Pontifical North American College)

The remaining students training for the priesthood at the North American College and the priest-students at the Casa Santa Maria in Rome are being sent back to the United States because of the coronavirus situation in Italy.

The Rev. Peter Harman, rector of the N.A.C., broke the news in a letter to all the United States bishops. He said the decision was made “with a heavy heart” in consultation with the N.A.C. board of governors and the U.S. Embassy to the Holy See.

The decision is hardly surprising as students for the priesthood at many of the other national colleges—including the Irish, Scots and English, were sent home, or given that option, almost two weeks ago as the crisis began to explode in Italy. Last week the Italian college of Capranica, where many seminarians for Italian dioceses reside, also decided to send its students home.

The decision to close the North American College was taken after the Italian prime minister over the weekend imposed new restrictions on the production of goods and the movement of employees.

Father Harman said it has been decided that the N.A.C. “formation program” and “the residence” of the Casa Santa Marta “will be suspended until further notice” and added that “the residents of both houses” have been asked to contact their home dioceses “as soon as possible to arrange for their return home in the coming days.”

In his letter, he explained that the decision was taken after the Italian prime minister over the weekend imposed new restrictions on the production of goods and the movement of employees, and while the college has sufficient supplies “for the short term,” there was no assurance that “the minimal amount of employees could be guaranteed indefinitely.” He was also concerned by the prospect of the students being dependent on the Italian health system in this crisis situation.

He told the bishops that “there are still options available for flights home,” but that situation could change. He made clear that the students will have to fully respect and maintain a 14-day quarantine when they return to the United States, and they would all be expected to follow the long-distance learning programs of their universities and check their college email regularly. He did not rule out that they might be able to return to Rome before the end of the academic year, but he said that such a decision can only be taken further down the line, when there is adequate information.

The U.S. State Department on March 20 issued a “Global Level 4 Health Advisory,” urging U.S. citizens to avoid all international travel due to the Covid-19 pandemic. “In countries where commercial departure options remain available, U.S. citizens who live in the United States should arrange for immediate return to the United States, unless they are prepared to remain abroad for an indefinite period,” the State Department said.

Particularly after Italy closed all schools and universities on March 5 and then ordered a nationwide lockdown on March 9, many dioceses had already called their students home, especially transitional deacons who are to be ordained to the priesthood in June. As of March 16, only 92 of the 192 seminarians remained on the campus on the Janiculum Hill, Father Harman told Catholic News Service.

The rector concluded that this is “obviously a sad decision which we had hoped to avoid,” but it was made necessary by “our desire and responsibility to assure that the students are best cared for and are closest to their emotional support system of their diocese and home.”

Italy has now suffered the most deaths linked to the coronavirus pandemic—a total of 6,077 since the virus first hit the country on Feb. 21—and 602 of these victims died over the past 24 hours. Most of the people who died succumbed to Covid-19 were elderly and had other health problems before being infected by the virus.

As the Italian Civil Protection agency stated on March 23 in its nightly nationally broadcast report, Italy has recorded a total of 63,927 cases of infection since Feb. 21, second only to China. A total of 50,418 persons currently have the virus, including 3,780 new cases of infection over the past 24 hours. On the positive side, 7,432 persons have been declared cured of the virus. The agency believes that the pandemic could peak in Italy in the next two weeks, but there is no certainty of this.