Pope Francis tells Italian newspaper: ‘I asked the Lord to stop the epidemic.’ 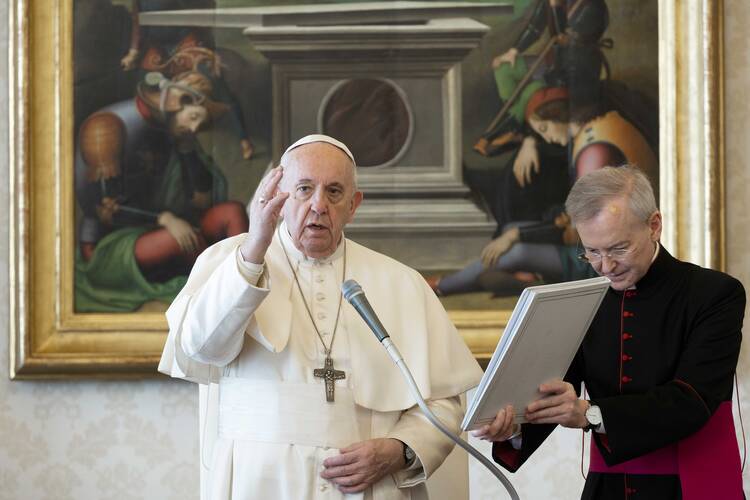 Pope Francis speaks during his general audience as it is livestreamed from the library of the Apostolic Palace at the Vatican March 18, 2020. (CNS photo/Vatican Media)

“I asked the Lord to stop the epidemic,” Pope Francis said, describing how he prayed on Sunday afternoon when he walked “on pilgrimage” along a deserted street in the center of Rome. “Lord, stop it with your hand. That’s what I prayed for.”

The pope stopped to pray in two churches. The heads of those churches said he prayed first for 20 minutes in silence before the revered icon of Our Lady with the child Jesus in her arms—“the protectress of the Roman people” in the Basilica of Saint Mary Major and then prayed for another 20 minutes before the “miraculous crucifix” in the church of St. Marcello in Via del Corso, both of which helped end the plague in Rome at different times in centuries past.

Pope Francis: “We must rediscover the concreteness of little things, small gestures of attention we can offer those close to us, our family, our friends.”

Francis confirmed that this was his prayer intention when he gave a brief, exclusive interview with Paolo Rodari, the Vatican correspondent of La Repubblica, an Italian daily, that was published on March 18. Asked how people should live these days in Italy and other countries while under lockdown and isolated in their homes, Francis counseled people: “Don’t waste these difficult days,” instead “rediscover” the importance of “small, concrete gestures expressing closeness and concreteness toward the people closest to us, a caress for our grandparents, a kiss for our children, for the people we love.”

He said such gestures are “important, decisive,” adding, “If we live these days like this, they won’t be wasted.”

“We must rediscover the concreteness of little things, small gestures of attention we can offer those close to us, our family, our friends,” Pope Francis said. “We must understand that in small things lies our treasure. These gestures of tenderness, affection, compassion are minimal and tend to be lost in the anonymity of everyday life, but they are nonetheless decisive, important. For example, a hot meal, a caress, a hug, a phone call.... They are familiar gestures of attention to the details of everyday life that make life meaningful and that create communion and communication amongst us.”

He remarked that sometimes in families “we only experience a virtual form of communication with one another.” These difficult circumstances create an opportunity to “discover a new closeness.”

“Families often eat together in great silence,” the pope said, “but not as a result of listening to each other, rather because the parents watch television while they eat, and children are on their mobile phones. They look like monks, all isolated from each other.”

But, he said, “listening to each other is important because that’s how we can understand the needs, efforts, desires of the other.” He expressed the hope that “the pain of these days should open us up to this concreteness.” He said the doctors, nurses, medical staff and volunteers, who are risking their lives to save the lives of other people during the pandemic “are an example of this concreteness.”

Francis knows that many have died because of coronavirus. In Italy, a country of 60 million people, 2,503 have died since Feb. 21 including very many health workers, and in today’s interview he asked everyone “to stay close to those who have lost loved ones, to be close to them in every possible way.” He emphasized, “Consolation must now be everyone’s commitment.”

More than 500,000 people now follow the live-television broadcast of Francis’ daily morning Mass, and it seems even more follow it on social media.

In his introduction at Mass this morning, March 18, in the chapel of Santa Marta, the Vatican guesthouse where he lives, Pope Francis told his virtual audience, “Today we pray for the deceased, those who have died because of the virus” and especially “for health care providers who have given their life in service for the sick.”

Asked in La Repubblica’s interview how people who do not have faith can have hope in these terrible days, Francis replied, “They are all God’s children and are looked upon by him. Even those who have not yet met God, those who do not have the gift of faith, can find their way through this, in the good things they believe in: They can find strength in love for their children, for their family, for their brothers and sisters.

“One can say: ‘I cannot pray because I do not believe.’ But at the same time, however, s/he can believe in the love of the people around him and thus find hope.”

In his virtual public audience this Wednesday morning, broadcast from the library of the apostolic palace where he normally greets heads of states and religious leaders, Francis again expressed his concern for those who are suffering from or working to combat the pandemic that has now reached more than 110 countries, including 18 in sub-Saharan Africa.

Recalling that tomorrow is the feast of St. Joseph, to whom he has a great devotion, he encouraged people “to invoke [the assistance of St. Joseph] with confidence, especially in difficult moments and entrust your very existence to this great saint.”

He said he joined the bishops of Italy in appealing to all families and every faithful person and religious community in this country to join together “in a moment of prayer, in this health emergency” at 9 p.m. (Rome time) on the feast of St. Joseph, “the custodian of the Holy Family and of our families” and “to recite together the rosary.”

After China, Italy is the country that has suffered the most so far from the pandemic with a total of 31,506 cases of infection and 2,503 deaths. “I will accompany you from here,” Francis promised, adding, “We will ask him to protect in a special way our family, our families, and in particular those who are sick and those who are taking care of the sick: doctors, nurses, volunteers that risk their life in this service.”