In Canada, Justin Trudeau marshals a federal response to coronavirus 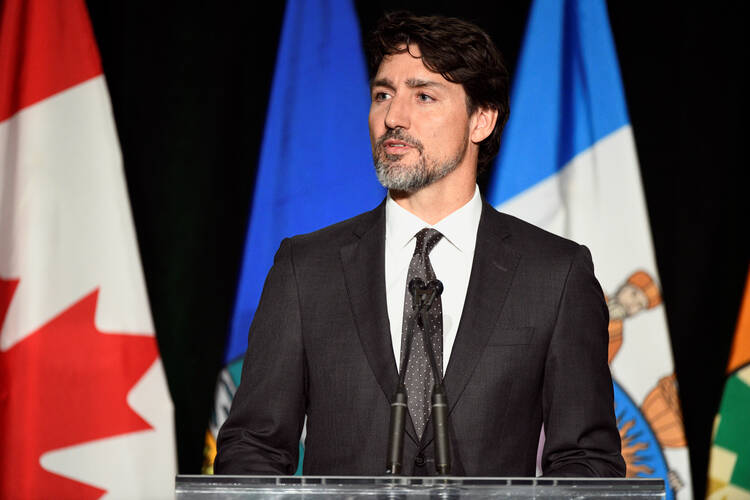 “In these extraordinary times, our government is taking extraordinary measures,” said Prime Minister Justin Trudeau as he announced a plan to provide $82 billion in aid in response to the Covid-19 crisis on March 18. More than 840 cases have been confirmed so far in Canada.

Among the emergency provisions are increases to family benefits, a six-month interest-free pause on federal student loan payments and a biweekly payment of $900 for sick or laid-off workers who do not have sick leave and do not qualify for Employment Insurance, Canada’s federal program for those who are unemployed. The Associated Press reported that, according to Mr. Trudeau, Canadian authorities had received 500,000 applications for employment insurance compared to just 27,000 for the same week last year.

Among the emergency provisions are increases to family benefits, a six-month interest-free pause on student loans and a biweekly payment of $900 for sick or laid-off workers without employment insurance or sick leave.

In total, the measures equal around 3 percent of Canada’s gross domestic product. The package is expected to pass through Canada’s Parliament and may only represent the beginning of the government response.

Although the spending is immense, unions, vulnerable communities and activists are calling for more, like extending employment insurance benefits to low-income and gig-economy workers, who do not currently qualify. Cathy Crowe, a nurse who works with the homeless population in Toronto, has criticized expectations that shelter workers, not trained nursing staff, screen for Covid-19 in an already overburdened shelter system. “It’s a critical role in a pandemic,” she wrote on Facebook. “Get it right. We’re at Level 3 now. Put nurses there.”

Ms. Crowe offered alternative recommendations for a plan to help the homeless, like improving communication to the homeless population and removing a moratorium on rules that prevent “distribution of survival supplies (such as food and sleeping bags).”

Unions, including the Ontario Nurses’ Association, have asked for more support for front-line health care workers.

All of Canada’s 10 provinces and three territories have declared a state of emergency, with Covid-19 cases reported in every province but none so far in the territories.

Additionally, the federal government is preparing a $15 billion bailout for its oil and gas industries, as the price of some Canadian crude oil plummeted below $10 per barrel, its lowest price in history. The decision has come under scrutiny, however, from members of the New Democratic Party, like Niki Ashton of Manitoba and Charlie Angus of Ontario, who say federal funds should be funneled directly to workers, not corporations.

Provinces and cities across the country have introduced their own regulations and measures for containing the spread of the virus and supporting those affected by it. Within the last week, all of Canada’s 10 provinces and three territories have declared a state of emergency, with Covid-19 cases reported in every province but none so far in the territories. Some, like Ontario, have suspended all evictions for the foreseeable future, a decision being explored or partially implemented by other provincial governments.

With a diversity of responses among provinces, the federal government has floated the idea of invoking special powers outlined in Canada’s Emergencies Act. The act would grant the federal government increased authority to direct provincial action, access funds, impose movement restrictions, block highways for domestic travel, repurpose large properties and more across the country.

The Emergencies Act is a successor to the War Measures Act, which has been invoked three times in Canada’s history—during the First and Second World Wars and most recently by Mr. Trudeau’s father, Pierre Trudeau, in 1970 in a response to a kidnapping and murder in Quebec by the Front de libération du Québec. For now, however, the government says it will not invoke the act, but it has not ruled out the possibility of doing so in the future.

Although the World Health Organization has recommended testing for coronavirus as much as possible, like other countries, Canada does not have the capacity to offer widespread testing. Currently, government officials are limiting tests to health care workers and high-priority patients.

Canada and the United States mutually agreed to close the border to nonessential travel for at least 30 days, reversing a previous exemption that allowed travelers from the United States, Mexico and the Caribbean to come to Canada. But travel and commerce related to supply chains having to do with food and medicines are excluded from the stricter measures.

The last time the U.S. border with Canada was closed was just after the Sept. 11, 2001, terror attacks. Canada’s border officials have halted most but not all deportations continuing with removals in “serious criminal cases” reviewed on a “case-by-case assessment.” Additionally, Canada has announced it will turn back asylum seekers arriving through non-official border crossings. (Asylum seekers arriving at official border crossings were already turned away under the Safe Third Country Agreement.)

Across Canada, Masses in many dioceses have been canceled, although there is as yet no blanket cancelation across the country from the Canadian Conference of Catholic Bishops. In Quebec, all celebrations and events in churches have been canceled for the foreseeable future across the province, including Masses, funerals and weddings.

“Together with all Canadians, the Catholic Bishops of Canada are following with deep concern the current developments in Canada and throughout the world regarding the rapid global spread of Coronavirus, which can in certain cases be the cause of serious illness and even death,” said the C.C.C.B. in a statement released on March 13. “Catholic faithful are invited to consult their local diocesan/eparchial websites for the preventive measures to be followed for pastoral care and liturgies.”

@deandettloff
Show Comments ()
Join the conversation: Login or create an account
Before you can comment, you need to update your profile to include your first and last name, as required in our comments policy. Then reload this page and you'll be set up for commenting. Update your profile
Show Comments ()
Comments are automatically closed two weeks after an article's initial publication. See our comments policy for more.