Why refugees in the U.S. are risking their lives at the Canadian border 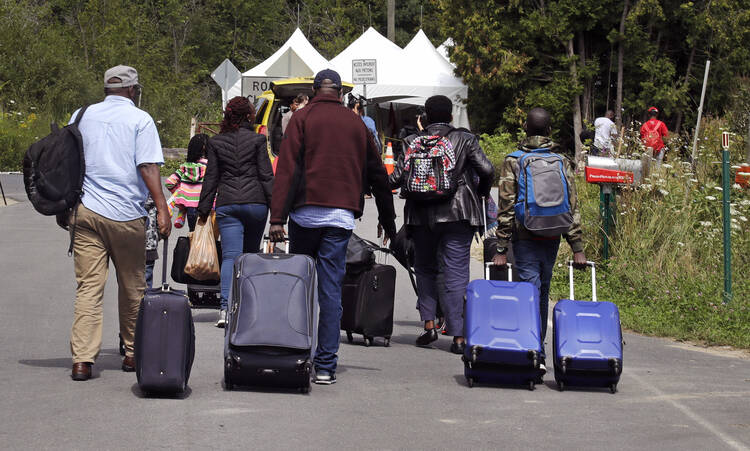 A family from Haiti approach a tent in Saint-Bernard-de-Lacolle, Quebec, stationed by Royal Canadian Mounted Police, as they haul their luggage down Roxham Road in Champlain, N.Y., Monday, Aug. 7, 2017. (AP Photo/Charles Krupa)

After being sworn in on Nov. 3, 2015, one of Canadian Prime Minister Justin Trudeau’s first significant decisions was to admit 25,000 Syrian refugees into Canada by the end of the year. Unsurprisingly, accepting thousands of refugees in two months proved to be too ambitious, leading the federal government to revise its promise and push the deadline back to February 2016. Though that deadline was met, accepting refugees into the country did not mean immediate resettlement. Many refugees spent months cramped in hotels waiting to be processed, even though private sponsorship groups were prepared to resettle them.

At the end of 2016, however, Canada faced new logistical challenges, when refugees, fearing President Trump’s anti-immigrant rhetoric, began to cross the Canadian border illegally from the United States in record numbers. Unprepared for unfamiliar winter weather, many refugees who initially fled from places in Africa were treated for frostbite after crossing the northern border on foot, while others were abandoned in cities by smugglers. In one especially troubling story, a 2-year-old boy traveling with a group of refugees suggested he should be left to die in the snow so his mother could come to Canada without the challenge of protecting him.

Refugees who initially fled from places in Africa were treated for frostbite after crossing the northern border on foot.

The influx of refugees has continued throughout the summer. Montreal’s Olympic Stadium recently opened up to house Haitian refugees coming from the Unites States, many of whom made the move after reading a fake news story that said Canada was inviting Haitians to come to the Quebec province without the usual process.

Martin Mark, director of the Office for Refugees of the Archdiocese of Toronto, says the Catholic Church has followed the development of the agreement since its inception. “From the beginning, our principle was that both countries should implement what the Geneva Convention says about refugees,” he says.

Refugees who came to the United States but no longer feel safe there are not permitted to seek asylum separately in Canada.

“That convention doesn’t allow any country to be excused from providing protection to refugees just because they claim they have a good neighbor or some other excuse,” says Mr. Mark. “Regardless of how you see the situation in the neighboring country, as a method of principle, the agreement is something we don’t accept.”

This year, together with Amnesty International and the Canadian Council for Refugees, the Canadian Council of Churches, of which the Roman Catholic Church is a member, has launched a legal challenge against the Safe Third Country Agreement. The same coalition also challenged the agreement in 2005. Although a federal court at that time ruled the S.T.A. was not legal, the decision was successfully appealed by the federal government, then led by Prime Minister Stephen Harper, leaving the agreement in place.

“By resisting this agreement, we are speaking out on behalf of the widow, the orphan, the sojourner,” says Rev. Karen Hamilton, general secretary of the C.C.C., which includes evangelicals, mainline Protestants, Catholics and other Christian communities, representing 85 percent of Christians in Canada. “We work in Canada by a consensus model; it’s not a ‘50 + 1’ kind of vote. All our denominations have agreed with [the legal challenge], or to let it go ahead.”

“By resisting this agreement, we are speaking out on behalf of the widow, the orphan, the sojourner.”

In 2004, when the S.T.A. was established, Rev. Hamilton says it was notably harmful to refugees coming from Latin America, especially Mexico and Guatemala. Though many of those refugees, she says, wanted to come to Canada, they first had to pass through the United States. According to the S.T.A., they were then ineligible to claim refugee status in Canada and had to stay in the United States, where they were more likely to be deported to the unstable regions they initially fled.

Today, Ms. Hamilton says, the S.T.A. encourages refugees who feel unsafe in the United States to make dangerous treks to avoid being turned away at the Canadian border.

Ms. Hamilton says parishes and congregations have played a significant role in resettling refugees. Mosques, synagogues and churches have come together to jointly sponsor refugee families, which cost around $30,000 (CAD) to sponsor for one year.

Because of a backlog in processing, however, many Catholic parishes are frustratedly waiting for the families they are prepared to sponsor, says Mr. Mark. “Refugees might wait in limbo for status determination for years. That’s a serious concern,” he says. “And then, some finally get a decision for a removal order.”

“Not only refugees are suffering,” says Mr. Mark, “but a lot of Canadians complain to their members of Parliament, saying, ‘Speed up, we need our refugees!’” The Archdiocese of Toronto alone has resettled over 5,000 refugees in the last two or three years, says Mr. Mark, adding that Cardinal Thomas Collins, archbishop of Toronto, has consistently provided the necessary means to keep the resettlement process running smoothly once families are cleared by the government. Mr. Mark adds that the program has been successful historically and aims to help refugees become financially independent and integrated into their new country.

The legal challenge will be a long process, Ms. Hamilton says. “We know that, and that’s important for denominations and parishes to know. We anticipate probably years. That’s just how legal processes go.” It is too early, she says, to tell if the government is hearing the concern. The Liberal Party that currently has a strong majority in the Canadian Parliament has said it stands by the S.T.A. for now, while the New Democratic Party, an opposition party, has called for its suspension.

“One of the great gifts God has given us is our long-term perspective as people of faith,” says Ms. Hamilton. “It’s been 2,000 years since Jesus, and Christianity is a strong force on the world scene. We are an Easter people, a persistent people. This is a great gift we bring in a society that has become so ‘quick-fix.’ The Catholic tradition knows this well. Jesus was a refugee, so we can do no other. It is a calling.”