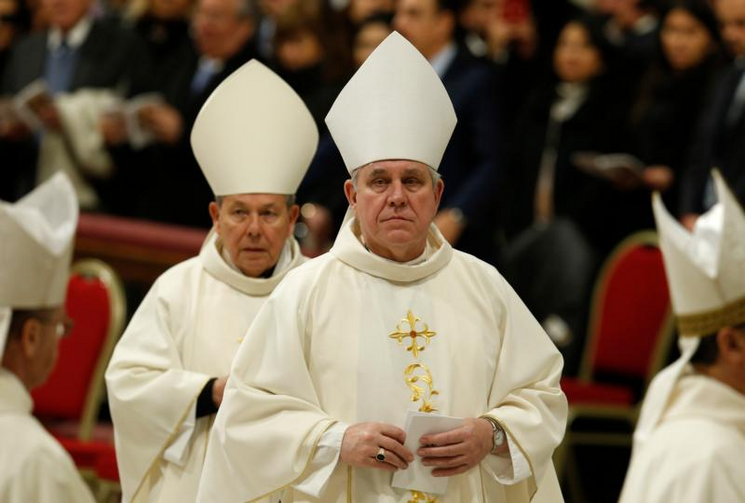 Archbishop Jerome E. Listecki of Milwaukee leaves in procession at the conclusion of Pope Francis' celebration of Mass marking the feast of Our Lady of Guadalupe in St. Peter's Basilica at the Vatican Dec. 12, 2019. (CNS photo/Paul Haring)

In response to the upcoming “Catholics for Trump” rally, set for March 19 at the Wisconsin Center in Milwaukee, Archbishop Jerome E. Listecki issued a statement clarifying that his archdiocese was not sponsoring the event.

“[T]he Catholic Church and the Archdiocese of Milwaukee are not endorsing the rally and are in no way affiliated to or sponsoring this event or campaign locally, statewide or nationally,” the archbishop said in a letter to Milwaukee parishioners released on March 11.

“I would like to take this opportunity to remind the Faithful that the Catholic Church is not a political organization, nor is it politically affiliated. The mission of the Church is religious, not political,” wrote the archbishop, adding that it is not the role of the church to endorse or urge defeat for specific political candidates.

“The manner in which Catholics vote is entirely guided by a well-formed conscience, a well-informed mind, and a prayerful disposition guided by the Holy Spirit,” he wrote. Archbishop Listecki has in the past criticized Trump administration efforts to end Deferred Action for Childhood Arrivals.

According to Politico, 52 percent of U.S. Catholics supported Mr. Trump for president in 2016. Despite widespread concerns in the United States about the escalating spread of the novel coronavirus, and the most recent recognition by the World Health Organization of the crisis as a pandemic, the rally has so far not been canceled or postponed. Democratic presidential candidates Bernie Sanders and Joseph R. Biden, Jr., have recently canceled campaign events as precautionary measures against Covid-19.