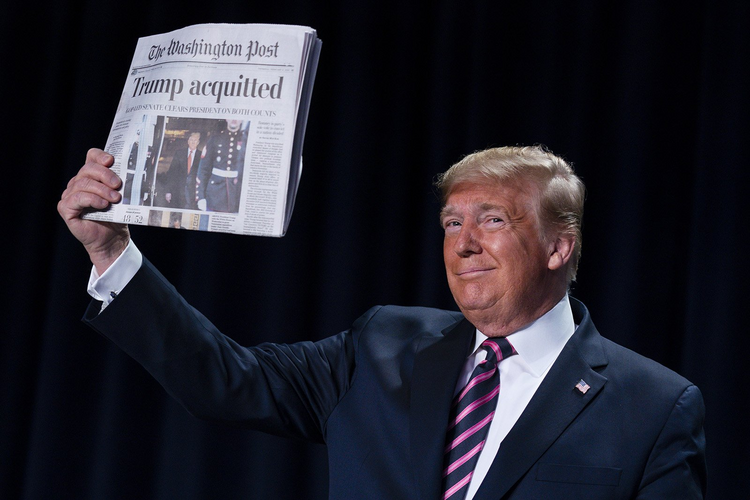 President Donald Trump holds up a newspaper with the headline that reads "Trump acquitted" during the 68th annual National Prayer Breakfast, at the Washington Hilton, on Feb. 6, 2020, in Washington. (AP Photo/ Evan Vucci)

WASHINGTON (RNS) — Shortly before President Donald Trump delivered his speech at the annual National Prayer Breakfast, the event’s keynote speaker, Harvard University professor and author Arthur Brooks, asked the crowd, “How many of you love somebody with whom you disagree politically?”

Many people in the audience raised their hands. Trump, sitting quietly a few feet away from Brooks, did not.

It was the beginning of an unusual appearance by a noticeably frustrated Trump, who used the multifaith religious gathering not only to champion his administration’s achievements on religious matters, but also to chide political opponents who challenged him during the recent impeachment process.

When the president arrived Thursday morning (Feb. 6), he stood before the applauding crowd and held aloft a newspaper emblazoned with a headline announcing his acquittal by the U.S. Senate from impeachment charges.

Later, when Brooks finished his speech on mending political division by “loving your enemies,” the president, his voice hoarse, approached the podium and opened his remarks by lamenting that he and his family “have been put through a terrible ordeal by some very corrupt and dishonest people.”

He then took thinly veiled shots at Utah Republican Sen. Mitt Romney, who invoked his faith on Wednesday when he announced that he would vote to convict Trump on abuse of power, and House Speaker Nancy Pelosi, D-California, who delivered a prayer for the poor at the breakfast and said throughout impeachment proceedings that she was praying for Trump.

“I don’t like people who use faith for justification for doing what they know is wrong, nor do I like people who say ‘I pray for you’ when they know that is not so,” said Trump, who identifies as Presbyterian.

The president eventually moved on from impeachment, pivoting to a discussion of what his administration has done to address issues important to various religious groups. His remarks echoed his State of the Union address delivered two days prior, when he also repeatedly invoked religion.

He also recounted a version of American history in which religion was framed as playing a central role, arguing that prayer was a key part of the American Revolution.

“So much of the greatness we have achieved, the mysteries we’ve unlocked and the wonders we’ve built, the challenges we’ve met, and the incredible heights that we’ve reached, has come from the faith of our families and the prayers of our people,” he said.

Trump then invoked the story of soldiers huddled in the snow at Valley Forge under the command of then-Gen. George Washington, suggesting that a belief in God gave them strength for the battle and comparing their plight to his 2016 election victory.

The speech was peppered with references to how his administration has pushed to allow for prayer in public schools and curb abortion — issues important to Christian conservatives, who make up a sizable percentage of his voter base.

“We are upholding the sanctity of life,” Trump said as the room burst into applause. “And we are doing that like nobody has ever done it before. … You better get out there and vote on Nov. 3, because you have a lot of people out there who aren’t liking what we’re doing.”

Trump noted the passage of criminal justice reform, which was backed by faith groups and lawmakers from both sides, and insisted his administration has worked to protect persecuted Christians and religious minorities abroad “like nobody has ever done” — a claim disputed by many Middle Eastern Christians.

“Faith keeps us free,” he said. “Prayer makes us strong. God alone is the author of life and the giver of grace.”

Trump told the story of a black pastor whose Louisiana church was burned to the ground by a “hateful arsonist” and praised the role of African American Christians throughout American history, saying the country is “eternally in (their) debt.”

He also bemoaned anti-Semitism and what he described as the persecution of religions in the United States, including Christianity.

But as his speech came to a close, Trump returned to a discussion of his impeachment. While expressing gratitude for people in the room, Trump appeared to go off-script to make a point that sometimes religious Americans “hate” people.

“I’m sorry, I apologize. I’m trying to learn,” he said, appearing to return to the question posed by Brooks at the start of the breakfast. “When they impeach you for nothing, you’re supposed to like them? It’s not easy, folks. I’m doing my best.”

Show Comments ()
Comments are automatically closed two weeks after an article's initial publication. See our comments policy for more.
Provide feedback on this article
Join the conversation: Login or create an account
Before you can comment, you need to update your profile to include your first and last name, as required in our comments policy. Then reload this page and you'll be set up for commenting. Update your profile
Advertisement
More: Donald Trump / US Politics