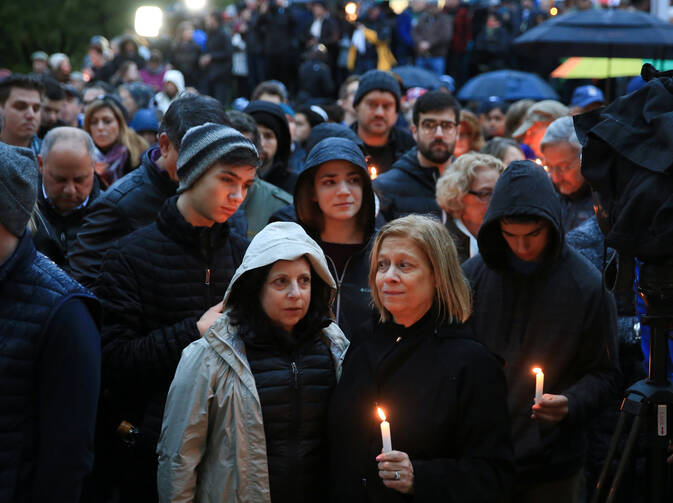 People mourn the loss of life as they hold a vigil for the victims of the Tree of Life Synagogue shooting in Pittsburgh Oct. 27, 2018. (CNS photo/John Altdorfer, Reuters)

Early this month, the F.B.I. arrested a man who had posted racist and anti-Semitic content on social media and then spoke with undercover agents about a plan to attack a Colorado synagogue. The director of the Anti-Defamation League in Denver told NPR this was at least the 13th violent plot against the U.S. Jewish community that has been foiled since last year’s massacre at the Tree of Life synagogue in Pittsburgh. Hate crimes, particularly directed at the Jewish community, are stubbornly persistent both worldwide and in the United States, even in supposedly tolerant New York City.

“Leaders in our religious, political and civic institutions must show visible solidarity with communities threatened with violence.”

In The Washington Post last month, Richard Stengel, a former undersecretary in the U.S. State Department, argued that the United States needs to consider laws against speech “that attacks and insults people on the basis of race, religion, ethnic origin and sexual orientation.” Many Western democracies have adopted this approach, but it is too easy for the definition of hate speech or dangerous speech to keep expanding to include legitimate political dissent, as Amnesty International has documented in Spain. Prescinding from the central importance of the First Amendment in political life, the U.S. political system, which concentrates power in an executive branch that can change drastically from election to election, is ill-suited for such a remedy by statutory restrictions. It would not be a good idea for each new president to put his or her own spin on what constitutes hate speech.

But the United States can try to get better data on hate crimes and threats. Since Sept. 11, 2001, it has strengthened the detection and prosecution of international terrorists. The federal government should have a similarly coordinated response to domestic threats based on religion, race and other identities. Last month, two U.S. senators—James Lankford, Republican of Oklahoma, and Jacky Rosen, Democrat of Nevada—launched the Bipartisan Task Force for Combating Anti-Semitism to work with law enforcement, clergy and civic leaders “to combat anti-Semitism by educating and empowering our communities.”

This is a welcome step. Most simply and most immediately, leaders in our religious, political and civic institutions must show visible solidarity with communities threatened with violence. And the Catholic Church has a moral duty, spelled out in the Second Vatican Council’s “Declaration on the Relation of the Church to Non-Christian Religions,” to actively oppose “any discrimination against people or harassment of them because of their race, color, condition of life, or religion.” The need to be vigilant is as important as ever.