The Editors: Catholics have a moral duty to fight anti-Semitism 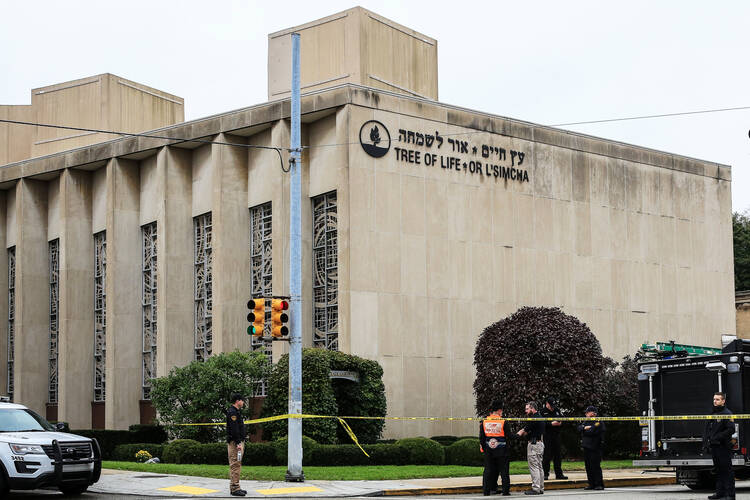 Police officers are seen after a gunman killed at least eleven people Oct. 27 at the Tree of Life Synagogue in Pittsburgh. Robert Bowers opened fire that morning during a service at the synagogue, also wounding at least six others, including four police officers, authorities said. (CNS photo/John Altdorfer, Reuters)

“Stop the words of hate,” pleaded Rabbi Jeffrey Myers of Tree of Life synagogue, the day after a gunman killed 11 people worshipping there in Pittsburgh. The shooter reportedly shouted “All Jews must die” before he opened fire.

The shooter reportedly also made anti-Semitic comments to law enforcement after his arrest, including that “they [Jews] were committing genocide to his people.” He was also a frequent user of Gab, a social-media platform that places few restrictions on the content that can be shared. His posts there were at turns anti-Semitic, nativist and nationalistic.

Pope Francis condemned the attack, saying, “We are all, in reality, wounded by this inhuman act of violence.” His words were a reminder that Catholics have a special responsibility to stand with our Jewish brothers and sisters and denounce these acts of evil—especially given the church’s own painful history of anti-Semitism. The church has taught since “Nostra Aetate” in 1965 that there is a “spiritual patrimony common to Christians and Jews,” and reproves “any discrimination against men or harassment of them because of their race, color, condition of life, or religion.”

On Saturday, President Donald J. Trump called for unity and condemned “the historic evil of anti-Semitism and every other form of evil.” Unfortunately, his incendiary rhetoric both before and after the attack has helped to foster an environment in which such evils can fester. Leaders of a Jewish group in Pittsburgh have written an open letter telling President Trump that “your words and your policies have emboldened a growing white nationalist movement” and have called on him to explicitly denounce white nationalism and cease his alarmist rhetoric about immigrants, refugees and minorities. Mr. Trump must recognize that his strong rejection of this specific episode of anti-Semitic violence cannot be fully credible if he continues to stoke fear and sow division for political advantage on other fronts. His call for unity needs to start with a clear break with his own patterns of accusatory and violent rhetoric.

We must reject violence. But this is the least that we should do. We must also directly challenge the deranged ideologies that spawn such acts and the toxic political culture in which they find a fertile soil. This means challenging the villainization and marginalization of Jews and other minority groups, which give encouragement, even if unintentionally, to these acts of violent depravity. The recent rhetoric directed against these groups is inhumane, un-Christian and un-American. In heeding Rabbi Myers’ call to end hateful words, we must also move past empty gestures. Now is the time to stand in peaceful solidarity with our brothers and sisters, with our whole minds, our hearts and our willing hands.

If the church has learned anything from its own history of anti-Semitism, it is that looking the other way is never justified. All people, but above all Christians, have a moral duty to support our Jewish neighbors; to call out anti-Semitism whenever and wherever it rears its odious head.

My reply to the headline - No, we do not!

We have a moral duty to eschew anti-Semitism ourselves and not teach it to others.
It will take many, many apologies and frequent and high profile recantation of the centuries old vilification reaching deeply even into the liturgy of the Easter season with reference to perfidious Jews. Christ-killers.

I do not see it, I do not hear it. Quietly changing the liturgy is very far from enough.

Headline it, shout it out, re-affirm it, flood the public domain with the news - Catholics are not and must not be anti-Semitic and that goes for hate speech about their nation Israel. Jesus is a Jew; Mary, Queen of Heaven is a Jew. His birthplace now in the arab occupied West Bank, his hometown now an all arab city in the state of Israel.
Let the Christians in Bethlehem and Nazareth lead the way, eh? Almost all communications from them are trenchantly anti-Jewish.
The Latin Patriarchate of Jerusalem is currently sede vacante: so much for our current Pope and the Christian faith presence in Israel. Too busy ignoring the second last Patriarch condemning Chr1stian Zionism

Rose Ellen, I agree with you. Criticism of Israel, the political state, is not synonymous with anti-Semitism.

Yes we do have an obligation to fight anti-Semitism. On a personal level, one of my closest and lifelong friends is Jewish and, that reason alone, is enough for me. As a father of four, I very much want my kids to grow up in a caring and tolerant society, Again, reason enough, all by itself, to fight anti-Semitism. Did I mention that I love my country and want it very much to live up to its ideals? Reason enough. The pro-Trump commenters present all seem to share a common theme.....their "guy", somehow, has no right to be criticized for his moral shortcomings.....er….because its political?? I suspect if Mr. Trump was not your "guy", the outrage would be no where to be found. And to Mr. Sharpe, who laughingly equates the movement of the American embassy in Israel by Trump as proof positive that he's not anti-Semetic…..well, let's just say you need to broaden you sources of information. The movement of that embassy was driven by one man....casino magnate Sheldon Adelson....a guy who has given the Republican party hundreds of millions of dollars, all to sway US foreign policy in its treatment of Israel.

Unless you have some form of evidence that this man acted as he did because of something that President Trump said, you are just using this tragedy as an opportunity to advance your political agenda. Jesuitical, yes; Christian, maybe less so.

One more thing, in some America Magazine forums (not this one so far) I have seen anti Semitic comments by posters which stayed up online. Maybe you can begin the fix to this by doing a better job of moderating your discussion groups.

Bonnie, there are so many un-Christian comments on this website that I now mostly skip reading comments.

Unfortunately, America has a small staff, and seems unable to assign someone to simply track and edit comments. When people go too far over the line, I send an email to the magazine - america@americamagazine.org. Subject would be something like "Offensive comment". Copy/paste the URL to the article that includes the offensive comment(s), and copy and paste the comments themselves into the email text. I have found that they respond fairly quickly when readers inform them of the existence of offensive comments.

When I do read comments I have learned that there are several who comment regularly on this website whose comments I now simply skip over - as they have nothing positive to say. The subjects that bring them out are expressions of empathy or support for Latino immigrants, for refugees, especially for muslim refugees, for the gay community, for women who seek to be equal members of the Catholic church and not have a sacrament denied simply because of their genes, and anything that points out un-christian policies promoted by the current administration. Since there are many articles on these subjects, I mostly skip comments because I already know what they will say..

Anne, I agree with your comments. I really do not understand when some Catholics lack empathy for immigrants, refugees, gays, women, minorities, etc. Jesus’ teachings on this are obvious and clear. As Christ taught us, ‘Amen, I say to you, whatever you did for one of these least brothers of mine, you did for me.” Matthew, Chapter 25:45.

They also have a moral duty to fight child molesters no matter where they are: Church, school, youth sports leagues, and I would consider that to be THE most important obligation. I was lucky enough to work with some of the fine IDF folks when I was in the military and have been staunchly pro-Israel ever since. Just like President Trump is. And unlike President Obama was. When I run into anti-Semites on-line, I give them the truth about the attack on the USS Liberty and that seems to make them go even more crazy than they already are.

One could also argue that editors have a moral duty not to make serious accusations in the absence of anything that could be vaguely regarded by a reasonable person as proof.

You don't like Trump. We get it. But if you insist on holding him personally responsible for all the ills of the world, you only succeed in further damaging your own credibility.

This article does not encourage unity but further division. Even if there is room for a civil debate about Trump's rhetoric (which I condemn most of the time), the Editors have lost an opportunity to take the higher moral road here and write an article that is devoid of the never-ending negative political smearing of Trump. For one thing, Trump is not responsible for the lunatic that killed 11 people in Pittsburg. Nor did Trump's rhetoric enflame such horror and hatred. To say or imply this in an article is irresponsible and not representative of the love and charity of the Gospels.

The Editors could have made their points without lacing into this article assertions that are nothing more than disguised hateful finger pointing. By doing so, the Editors politicize this tragedy. In truth, Trump has done more for Israel and the international Jewish community than most of our past Presidents. I think the Editors here have let their emotions rule their practical reason and moral duty.

Hard to be charitable, as you suggest, when reading some of the comments below which reveal ignorance, deep-seated prejudice, and harmful rhetoric. Your editorial is a call to action to engage our Jewish brothers and sisters in the kind of behavior that will lead to social change and maybe even lead to a serious reduction in the virulent anti-Semitism that rears its ugly head in our society all too often.
Surely you don't think that because a man's daughter converts to a particular religion that all his prejudices disappear? You're not that naive, are you?