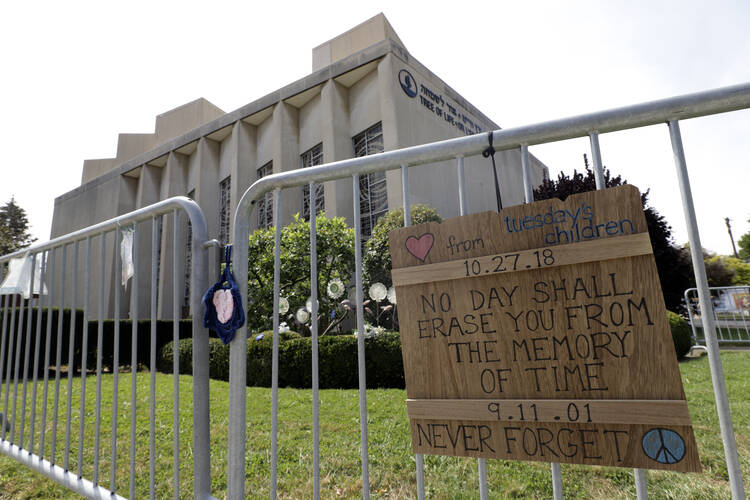 A sign hangs on a fence surrounding the Tree of Life synagogue in Pittsburgh on Tuesday, Sept. 17, 2019. (AP Photo/Gene J. Puskar)

New York City has seen a surge in anti-Semitic hate crimes, according to New York Police Department officials. In early September, the N.Y.P.D. said that so far this year there have been 152 reports of anti-Semitic hate crimes, ranging from vandalism to violent assaults, a 63 percent increase over the same period in 2018. In one particularly disturbing incident in August, a 63-year-old Jewish man reported that he was viciously attacked with a brick while running in a Brooklyn park by a man yelling anti-Semitic slurs. The police did not offer an explanation for the recent spike, and there is no clear pattern to the various physical attacks, except that as members of the Hasidic community, many of the victims are visibly Jewish.

Almost one year ago, a white nationalist killed 11 people worshipping at the Tree of Life synagogue in Pittsburgh. Nationwide, anti-Semitic hate crimes make up 13 percent of all hate crimes reported to the F.B.I., which also noted an uptick in hate crime rates in 2017, the latest year for which data is available. Anti-Semitic crimes have historically been and remain the most common religiously motivated crimes.

Every citizen, whether aligned with the political right or the left, must denounce these crimes against our Jewish brothers and sisters.

The stoking of nationalist sentiment by far right groups has created a hostile environment for the country’s Jews and other minorities. But nationalist fervor does not explain most of the crimes, and it is imperative that these crimes too be forcefully denounced, even if they do not fit into the reigning narrative.

Review: New exhibit reminds us the Holocaust wasn’t long ago or far away
Emma Winters

No political ends can justify the toleration of anti-Semitism. Every citizen, whether aligned with the political right or the left, must denounce these crimes against our Jewish brothers and sisters. And Catholics especially must take to heart the words of Pope Francis: “A Christian cannot be an anti-Semite; we share the same roots. It would be a contradiction of faith and life. Rather, we are called to commit ourselves to ensure anti-Semitism is banned from the human community.”

The lesson of Incarnation is that God adores every human being, every one, Semite and anti-Semite together. Whether or not that applies to what they might do is not so clear, but hate is not a recognizable attribute of God.

As a result, challenging anti-Semitism needs to been done with some care for those promulgating it. There does need to be understanding of its roots and of the backgrounds of the individuals involved. It has to be addressed case by case in my opinion.

"The police did not offer an explanation for the recent spike" - Police know that to name the elephant in the room (Trump and his embracing neo-Nazi trash) is to endanger their lives and jobs.