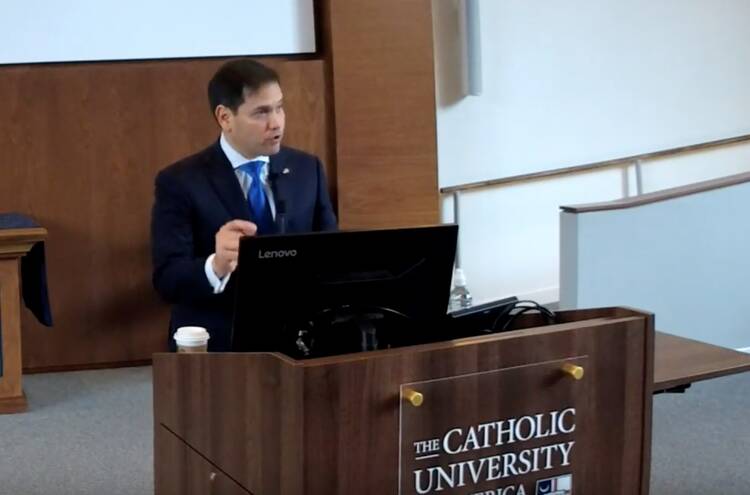 Championing “common-good capitalism” and invoking Catholic social teaching, Senator Marco Rubio, a Florida Republican, addressed students at the Catholic University of America’s Busch School of Business in Washington on Nov. 5. “Common-good capitalism is about a vibrant and growing free market,” Mr. Rubio told the students, “but it is also about harnessing and channeling that growth for the benefit of our country, our people and our society at large.

“On the political right, where I come from,” he said, “we’ve become defenders of the right of business to make a profit…but we have neglected the rights of workers to share in the benefits they create for their employer.”

The quest for profit goes too far, he said, when businesses desert the workers and communities that made them profitable in the first place simply to make goods more cheaply in other countries. “When dignified work is unavailable, more families need Thanksgiving meals delivered, but fewer families have the money or time to provide them,” Mr. Rubio said. “When dignified work is unavailable, men are hit especially hard, because something that is core to being a man—providing for your family—has been taken away.”

Mr. Rubio quoted from Pope Leo XIII's 1891 encyclical “Rerum Novarum,” which ushered in the age of Catholic social teaching, saying the distress and discontent felt by workers and populations in upheaval because of the Industrial Revolution mirrors the unease felt by many today.

The quest for profit goes too far, he said, when businesses desert the workers and communities that made them profitable in the first place simply to make goods more cheaply in other countries.

In an auditorium filled mostly with students, Mr. Rubio told them they would be the first generation of Americans “worse off” than their parents: burdened with student debt, facing uncertain jobs and career prospects despite a college degree, with homeownership beyond their reach and starting later than ever to marry and start a family.

But he derided socialism as the solution to these ills. “Some politicians today entice us to embrace socialism, with the promise that only the government can provide us these things, but in practice that’s never how it works,” he said.

The speech, “Human Dignity and the Purpose of Capitalism,” comes on the heels of an article Mr. Rubio wrote for the Catholic periodical First Things in August: “What Economics Is For.”

In that piece, drawing on church teaching and “Rerum Novarum,” Mr. Rubio wrote, “In the American tradition, private business is the main institution the public has entrusted with providing dignified work.” He criticized “large, transnational corporations” functioning only for profit maximization with little attention to improving the lot of their laborers.

“When dignified work is lost or unattainable, it corrodes the human spirit,” he wrote.

Mr. Rubio said that, despite the past three years of “robust economic growth,” Americans are not pleased with the economy or political culture because of partisan polarization and diminishing opportunities for “dignified work.”

This past August, Jonathan Malesic, writing in America, called it “remarkable” that the senator’s viewpoints on workers’ dignity in his First Things piece were “more commonly heard from Democratic senators like Ohio’s Sherrod Brown and Elizabeth Warren of Massachusetts.”

In his speech at Catholic University, Mr. Rubio said that, despite the past three years of “robust economic growth,” Americans are not pleased with the economy or political culture because of partisan polarization and diminishing opportunities for “dignified work.”

His core complaint: The U.S. business class is not investing enough in its workers or the dignity of labor, injuring the economy and contributing to poverty, suicide, “drug dependency” and the breakdown of the family. Mr. Rubio sees “pockets of prosperity” in cities such as New York and Los Angeles, while average workers across the country are left out.

Some found fault with the speech—and the senator’s congressional record. John Gehring, Catholic program director at Faith in Public Life, wrote on Twitter: “Marco Rubio conveniently not mentioning that opposing a minimum wage and passing tax policies that benefit the wealthiest few is radically out of step with Catholic teaching.”

Stephen White, executive director of Catholic University of America’s The Catholic Project, found himself reacting not so much to Mr. Rubio’s speech but to the jumbled response to it that followed on social media. “We often look at Catholic social teaching as if it were a Catholic party platform, defining what policies Catholics are supposed to be for and which we’re supposed to be against,” he said, commenting via text message. “But this misses the real value of Catholic social teaching, which is a coherent and comprehensive vision of what it means to be a human person made in God’s image and made for communion with others and with God.

“Like Pope Francis has said: the church’s moral teachings aren’t ‘disjointed multitude of doctrines.’ If we treat them that way, they ‘collapse like a house of cards.’ Instead, ‘everything is connected.’ It’s precisely the church’s vision of the human person—human nature understood in the full light of Revelation—that ties all of C.S.T. together.”

Was Mr. Rubio able to offer to make those connections?

Perhaps not this time, Mr. White said. “He deserves credit, I think, for trying move away from simply proof texting C.S.T. in support of, or in opposition to preferred policies and more towards trying to find policies that serve the broader vision for society laid out by C.S.T.”

So in all he assessed the speech “a step in the right direction.” The attempt to define “a more comprehensive vision” of Catholic social teaching at practical work in society is so rare these days, Mr. White said, “that even this modest effort jumps out as exemplary almost by default.”

Steven Millies, associate professor of public theology and director of the Bernardin Center at the Catholic Theological Union in Chicago, commenting on the speech in an email to America, said: “His diagnosis is sound, but his solutions need some work.

“Rubio is looking for a place to fit into American politics, and, good for him, he begins with an altogether obvious diagnosis that no one else in his party has the courage to say out loud: finance capitalism is contrary to the national interest and the good of American workers,” Mr. Millies said, “it defeats productivity and rewards shortsighted gain at the expense of everything else.

Can Marco Rubio help to break the partisan divide over the dignity of work?
Jonathan Malesic

He added, “I cannot help feeling there are some unexplored options here he does not mention. He disdains a third way, even as that is what he has argued for most persuasively.

“Catholic theorists of distributism, for example, proposed an entirely different model that needs no jury rigging or awkward contortions to fit Catholic social teaching,” Mr. Milies said, “because it does what Leo XIII, John Paul II, Benedict XVI and Francis did but which neither Rubio nor most American Catholics are able to do: Begin by abandoning capitalism. They cannot do it, I suppose, because perhaps they hold capitalism at least as dear as Catholicism, and there may be the real problem.”

While Mr. Rubio was not hesitant to indict the current state of business or politics in the United States, he did not use his address to directly comment on President Trump. He later echoed a 2016 Trump campaign slogan, saying, “I remain enthusiastic and optimistic that we have the opportunity to create a country, an America, that’s even greater than it has ever been before.” The speech was followed by a question-and-answer session, during which, as captured by a tweet from Crux national correspondent Christopher White, Mr. Rubio signed a MAGA hat.