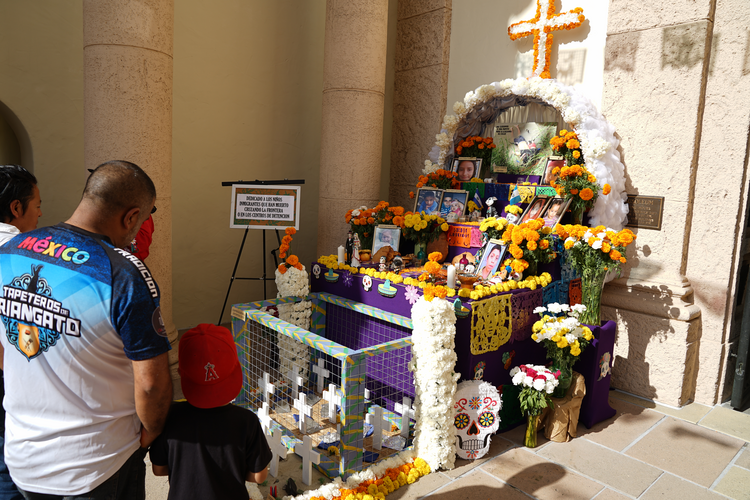 A father and son pray before an altar dedicated to children who died in U.S. custody Nov. 2 at Calvary Cemetery in Los Angeles. (J.D. Long-García)

Matachines danced at the main entrance of Calvary Cemetery in East Los Angeles, filling the air with the sound of drums and other percussion instruments. They were there to celebrate Día de los Muertos, the Day of the Dead, on Nov. 2, the feast of All Souls.

The traditional Mexican celebration is a way of remembering loved ones who have passed away while also celebrating life after death. Not far from the dancers, an ofrenda, or altar, had been set up to remember the children who have died on the U.S.-Mexico border—either in detention or while crossing the border.

“It hurts us to see such tragedies,” said Claudia Marquez, who designed the altar. “We would like these families to know that we remember them and the children they’ve lost. We keep them in our hearts.”

White crosses representing the children who died were placed in sand and within a steel cage. The group, from St. Charles Borromeo Church in North Hollywood, Calif., also placed images of the children who had died in U.S. custody, including Jakelin Caal, 7, Felipe Alonzo Gomez, 8, Juan de León Gutiérrez, 16, and Wilmer Ramirez Vasquez, 2. The altar also had a photograph of Oscar Alberto Martinez Ramirez and his 23-month-old daughter, Valeria, who drowned in the Rio Grande.

“They died on their way to this country and made that journey from life into death,” Ms. Marquez said. “In the end, we will find them there with our God. That’s where the families will find their children, these poor children that because of their age may not have realized the reality through which they were living.”

“We would like these families to know that we remember them and the children they’ve lost. We keep them in our hearts.”

While Día de los Muertos is a Mexican tradition, others from the parish also took part in commemorating the children who died, many of whom came from Central America. Carlos Castillo, from Guatemala, said immigrants come with a dream of a better life, “but for these families, the dream has ended.”

“The church can do more, all of the church, not just our bishops,” he said. “More has to be done to raise our voices as a church, so that something will be done with our immigration laws.”

After celebrating Mass, Archbishop José H. Gomez blessed more than 70 altars built by families and church groups. Other altars included one dedicated to children who were killed in shootings and one to St. Óscar Romero and Rutilio Grande, S.J., two men who are dear to the Salvadoran community.

“He showed us how to live our faith,” she said.

I never had a reason to celebrate Day of the Dead. Now I remember my grandpa with Pan de Muerto.
Vivian Cabrera

Father Grande also holds a special place in her heart—Ms. Oliver is his niece. In talking about Father Grande, she cannot help but call him “Tio Rutilio.”

“He would always be wearing old shoes. I would ask him why and he’d say, ‘They still work!’” she said. “I remember him soliciting help for the poor.... But I never imagined the broad appeal of my uncle.”

For years, Día de los Muertos celebrations had been held at secular locations in Los Angeles. Over the last several years, however, Catholic Cemeteries of Los Angeles and the Office of Religious Education of the Archdiocese of Los Angeles have been organizing celebrations of the tradition, which combines faith and culture.

“We live in a society that believes this world is all there is and that we have to obtain everything here and now,” Archbishop Gomez said in his bilingual homily during Mass at the cemetery. “But that’s not reality, not even close. There’s a horizon beyond this world. Death is not the end but a new beginning. We will be raised with Jesus on the Last Day.”

Irony - All these children were escaping Catholic countries and going to one that is increasingly secular. Are the ones to blame for these deaths the one that encouraged them to make the journey?

They are running for their lives from the results of decades of US policy. None of them think they will end up with a life like yours, they are nearly penniless refugees looking to stay alive. It has nothing to do with their religion. You, as Devils advocate, are trying to build what philosophers have defined for centuries as a, "False equivalence".

It is indeed tragic that some of these children died while enroute to a better live. To the extent the U.S. could have done something differently while at the border or in custody, those failings need to be identified and corrections made for the future.

When is America going to do an in-depth article on what the Church and others can do to make life better in the their countries so that the risk of fleeing can be avoided?

Sr. Ita Ford, Sr.Maura Clarke,Sr DorothyKazel, Jean Donovan, Ignacio Ellacuria SJ,Ignacio Martin Baro SJ, Secundo Montes SJ, Juan Ramon Moreno SJ, Joaquin Lopez y Lopez, Amando Lopez SJ, Elba Ramos, Celina Ramos, Fr Oscar Romero would be better qualified to respond to your query than I am. They are far from alone. Someday I hope you two find out more about the world situation. The study of history really does answer a lot of questions. A better life? Staying alive at all is more like it.

The modern world of freedom for the masses flowed from England. The rest of the world lived under authoritarian rule since the beginning of time. In Christendom, or Catholic countries, the Church had an official policy of a strict class system that kept nearly all its members in poverty and servitude. The rest of the world was just dictatorships without much underlying philosophy justifying it and the results were the same. All started to change in the 1600's in England.

Most of it was post Cromwell, but it was starting to happen then. Best example is William Penn and Pennsylvania which was the result of the Restoration and Charles II's debt to Penn's father. William Penn's acceptance of Quakerism was part of the process and he instituted religious freedom in Pennsylvania and no social hierarchy or privileged group. This led to prosperity for many poor people as they reaped the rewards of their efforts..